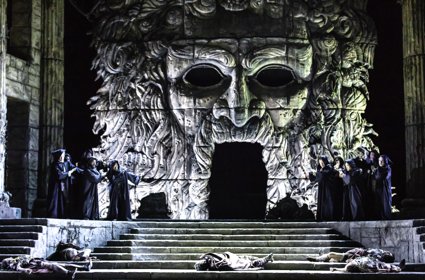 [Below: The God Neptune has washed the living survivors of the storm he created onto the Cretan shore; edited image, based on a Kyle Flubacker photograph, courtesy of the Lyric Opera of Chicago.] 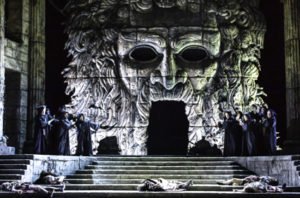 Lyric tenor Matthew Polenzani was an impressive Idomeneo. He imbues the character with noble bearing, even as he portrays the pathos of a grieving father. Polenzani’s vocally stunning performance of Fuor del mar elicited a sustained, vociferous mid-performance ovation.

[Below: Matthew Polenzani as Idomeneo; edited image, based on a Kyle Flubacker photograph, courtesy of the Lyric Opera of Chicago. ] 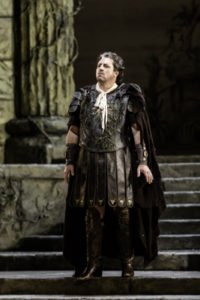 Possessing the requisite vocal control to excel in Mozart’s tenor roles, Polenzani’s voice has blossomed as it has matured, and has the weight needed for Idomeneo’s highly dramatic arias. Aspiring Mozartian tenors should closely study Polenzani’s technique.

[Below: Janai Brugger as Ilia; edited image, based on a Kyle Flubacker photograph, courtesy of the Lyric Opera of Chicago.] 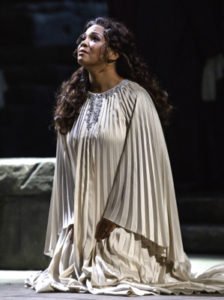 I had appreciated Janai Brugger’s performance of Pamina in a Los Angeles Opera production of Mozart’s “The Magic Flute”, among other L. A. Opera assignments.

This was my first opportunity to witness the full range of Brugger’s vocal and dramatic skills. The resulting portrait of a princess who falls in love with her captor, Prince Idamante (a theme that Verdi explored with his Aida and Radames almost nine decades later), was persuasive.

The part of Idamante, originally written for a castrato, has the distinction of being the last composed castrato role in an opera that still exists in the performance repertory. Mezzo-sopranos, like Brower,  have taken on the role for over two centuries.

[Below: Angela Brower as Idamante; edited image, based on a Kyle Flubacker photograph, courtesy of the Lyric Opera of Chicago.] 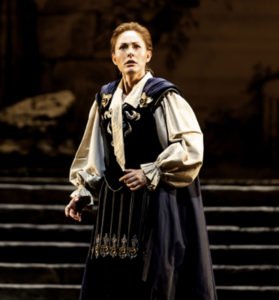 I had reported on Brower’s forays into French opera – her Nicklausse to Polenzani’s Hoffmann in San Frnacisco [Matthew Polenzani Triumphs in Pelly’s Take on “Tales of Hoffmann” – San Francisco Opera, June 5, 2013] and her Frasquita in Bizet’s “Carmen” in Munich’s Bayerische Staatsoper.

Soprano Erin Wall successfully assayed yet another great dramatic soprano role, communicating the fury and savage jealousy as Princess Elettra, the daughter of the Greek King Agamemnon (and, in those moments when the character appears to be having her way, a seemingly insincere sweetness).

[Below: Erin Wall as Elettra; edited image, based on a Kyle Flubacker photograph, courtesy of the Lyric Opera of Chicago.] 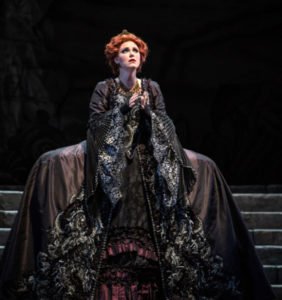 Of the small number of operas based on events that took place immediately after the Trojan War, three operas – Mozart’s 18th century “Idomeneo”, Berlioz’ 19th century “Les Troyens” and Richard Strauss’ 20th century “Elektra” hold places in the opera performance repertory. “Troyens” deals with postwar travels of defeated Trojans, “Elektra” with returning Greeks, but only “Idomeneo” with both.

It is the final aria of Elettra (Elektra) – D’Oreste, d’aiace, passionately performed by Wall – that reminds us of that the anger and frustration that the character feels at the end of “Idomeneo” will be manifested so decisively in Strauss’ 20th century permutation of the character.

David Portillo’s Arbace and other artists

Noah Baetge brought a forceful presence to the role of the High Priest. David Weigel was the Voice of Neptune. Whitney Morrison and Kayleigh Decker were Women of Crete. Josh Lovell and Alan Higgs were Trojan Men.

[Below: David Portillo as Arbace; edited image, based on a Kyle Flubacker photograph, courtesy of the Lyric Opera of Chicago.] 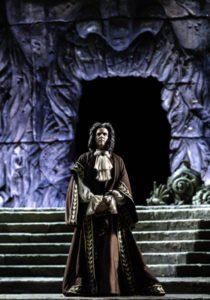 Sir Andrew Davis and the Lyric Opera Orchestra and Chorus

Sir Andrew Davis authoritatively presided over the musical performance, bringing elegance and sophistication to a work whose every aria and chorus is a masterpiece of musical invention.

“Idomeneo” is a great choral work, unparalleled even in Mozart’s later operas. The Lyric Opera chorus sounded brilliantly, from their opening Godiam la pace, celebrating the freeing of the Trojan captives and their reconciliation with the Cretan citizens. 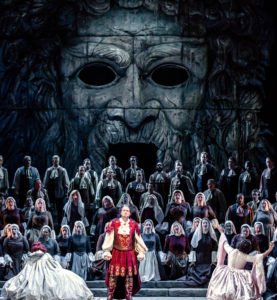 In 1977, the San Francisco Opera imported the “Idomeneo” production for its first ever performances of the work. I attended its first and third performances.

[Below: a scene of the Cretan populace feeling the effects of the god Neptune’s disfavor; edited image, based on a Kyle Flubacker photograph, courtesy of the Lyric Opera of Chicago.] 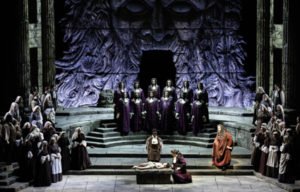 The arresting image of the god Neptune, encrusted with shellfish, sea stars and nautiluses, dominates several of the Ponnelle’s scenes framed by ancient columns, while other scenes highlight sepia prints. Ponnelle’s Enlightenment-era costumes reflect the intellectual ferment of the age in which Mozart lived.

David Kneuss was the revival director.

Although my review was of the final scheduled performance of the Lyric season, I strongly recommend that opera-goers who appreciate excellent performances of Mozart operas take advantages of any  opportunities to attend future performances of the artists in the principal roles.

In an era when pieces of the Jean-Pierre Ponnelle legacy seem to be disappearing, I am hopeful that this production will be recognized as a “world treasure” that needs both to be preserved for posterity, while being periodically performed.