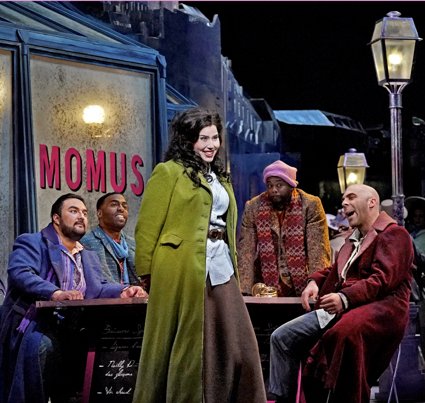 The Santa Fe Opera opened its 2019 season with a new production of Puccini’s “La Boheme”, directed by Mary Birnbaum.

The evening proved to be a triumph for Arizona soprano Vanessa Vasquez as Mimi, leading an impressive young cast.

Vasquez has extraordinary credentials in vocal performance. Her training included four years at Philadelphia’s prestigious Academy of Vocal Arts. Her many achievements include winning the 2017 New York Metropoltian Opera’s National Council Auditions and being a finalist in Placido Domingo’s 2018 Operalia contest in Lisbon, Portugal.

Guatemala tenor Mario Chang was a creditable Rodolfo, ardent and affecting in the opera’s third act “break-up, then make-up” duets between Rodolfo and Mimi.

[Below: Mario Chang as Rodolfo; edited image, based on a Ken Howard photograph, courtesy of the Santa Fe Opera.]

[Below: Mimi (center) walks with Rodolfo (Mario Chang, right) through the crowds surrounding the Cafe Momus; edited image, based on a Ken Howard photograph, courtesy of the Santa Fe Opera.]

Reunited with Mario Chang, his colleague in the 2017 Santa Fe Opera “Lucia di Lammermoor” cited above, Maryland baritone Zachary Nelson successfully plumbed the riches of the role of Marcello.

The role of Marcello is enriched by some of Puccini’s most inspired music. Nelson’s rich baritone and dramatic powers were enlisted for Marcello’s on-again, off-again intense love affair with Musetta, and the beautiful third act duet with Mimi, E fredo, Entrate.

Nelson is, like Vasquez, a graduate of the Philadelphia’s Academy of the Vocal Arts whose career is on the ascent.

Connecticut soprano Gabriella Reyes was a endearing Musetta, making a fast-paced entrance on roller blades, invoking one to imagine she is ice-skating in a Parisian winter. (Creating an Act II ice skating rink for a New Mexico summer evening would be a challenge.)

[Below: Musetta (Gabriella Reyes) skates near the Cafe Momus; edited image, based on a Ken Howard photograph, courtesy of the Santa Fe Opera.]

Reyes embodied the range of emotions one associates with Musetta – her furious battles and ultimate reconciliation with Marcello, and her empathetic friendship with Mimi.

[Below: Gabriella Reyes as Musetta; edited image, based on a Ken Howard photograph, courtesy of the Santa Fe Opera.]

District of Columbia bass was an imposing Colline, and sang that philosopher’s philosophical aria Vecchia zimarra beautifully and affectingly.

[Below: the Bohemian roommates Marcello (Zachary Nelson, left), Rodolfo (Mario Chang, second from left), Colline (Soloman Howard, second from right) and Schaunard (Will Liverman, right) pretend they are at an aristocratic ball; edited image, based on a Ken Howard photograph, courtesy of the Santa Fe Opera.]

Illinois baritone Will Liverman sang well and was a lively presence in the role of the fourth Bohemian, Schaunard.

Pennsylvania bass-baritone Dale Travis is a specialist in the buffo roles. The two buffo character roles in “Boheme” – the easily outwitted landlord Benoit and the Musetta’s money-bags date Alcindoro – are traditionally performed in as single performance by the same artist. Travis executed both roles skillfully.

Virginia tenor Elliott Paige, bedecked in an eyecatching costume and with an appealing voice, made much of his brief appearance as the toy seller Parpignol.

[Below: the toy seller Parpignol (Elliott Paige, at top) delights the children; edited image, based on a Ken Howard photograph, courtesy of the Santa Fe Opera.]

New York director Mary Birnbaum created an imaginative staging for the familiar opera, with fast-paced scene changes that left the impression that a whirlwind had just passed through.

New York designer Grace Laubacher created a group of changeable structures, pieces of which formed the Bohemians’ garret in Acts I and IV, the Cafe Momus in Act II, and appeared to serve as both the Tavern and Custom House in Act III.

[Below: Musetta (Gabriella Reyes, left), Mimi (Vanessa Vasquez, center) and Marcello (Zachary Nelson, right) are together again at a tavern on the city’s border; edited image, based on a Ken Howard photograph, courtesy of the Santa Fe Opera.]

Canadian designer Camellia Hoo created the costumes, striking images for the principals, light pastels for the choristers in the Christmastide Momus scenes, although occasionally anachronistic, such as with Musetta’s Momus costume.

That the combined efforts of Birnbaum, Laubacher and Koo (each of whom was making a Santa Fe Opera debut) resulted in a highly original presentation of “La Boheme”, that remained true to the story, is undeniable. Ultimately, however, some these efforts overwhelm this familiar, endearing and ultimately tragic story.

I recommend the cast and musical performance enthusiastically, both for the veteran opera-goer and the person new to opera.