The Santa Fe Opera has announced its Summer 2022 season. It consists of four 19th century works and the world premiere of “M. Butterfly”, which was previously announced but canceled along with the other operas of the Summer 2020 sseason, due to the Covid-19 pandemic.

The new opera “M. Butterfly” will be highlighted in a subsequent “Quests and Anticipations” feature. 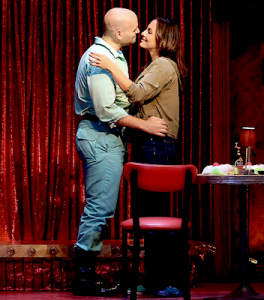 Stephen Barlow is stage director for Rossini’s “Il Barbiere di Siviglia”, the most popular opera buffa. The opera stars Joshua Hopkins as Figaro the Barber, Emily Fons as Rosina and Jack Swanson as Almaviva. The role of Dr Bartolo is performed by Kevin Burdette in July and Ryan Speedo Green in August.

[Below: Jack Swanson as Count Almaviva in disguise as Lindoro; edited image, based on a Curtis Brown photograph, courtesy of the Santa Fe Opera.] 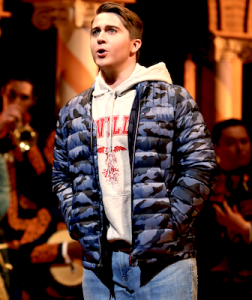 [Below: Benedetto Cristofani’s 2022 poster illustration for the Santa Fe Opera, celebrating the scene in which Falstaff suffers the indignity of having to hide in a laundry basket.] 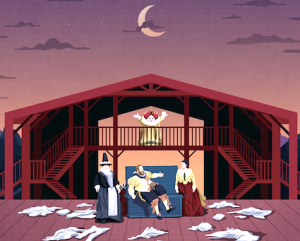 Zack Winokur and Lisenka Heijboer Castanon direct Wagner’s “Tristan und Isolde”, the opera making its belated Santa Fe Opera debut, after its cancellation with the rest of the 2020 season. Simon O’Neill is Tristan; Tamara Wilsosn is Isolde. Jamie Barton is Brangaene. Nicholas Brownlee is Kurwenal. Eric Owens is King Marke for all performance except for Augusts 11, when David Leigh performs the role, 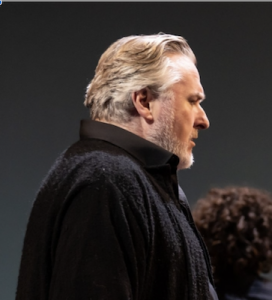 Maestro James Gaffigan conducts. The scenic design is by the Charlap Hyman and Herrero Company. The cosstume desisgns are by Charles J. Soto, projections by Greg Emetaz.

This list is supplementary to previous lists in this “Quests and Anticipations” series of selected operas being performed through June, 2022:

Rossini and Ferretti’s “La Cenerentola” at the Los Angeles Opera and Mozart’s and da Ponte’s “Don GIovanni” at the San Francisco Opera [In Quest of 2021 and 2022 Opera Performances in California and Arizona].