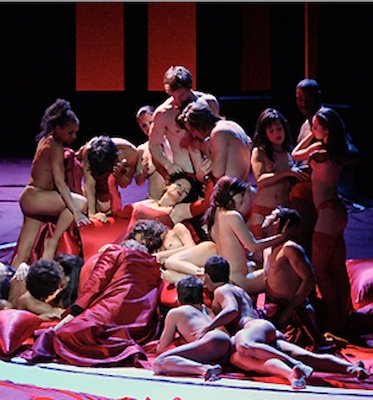 The Los Angeles Opera re-opens for its 2021-22 season (after the Covid-19 pandemic forced cancellation of its previous season) with Verdi’s “Il Trovatore”, conducted by Maestro James Conlon. The role of Manrico is shared by tenors Limmie Pulliam (first four performances) and Gregory Kunde (the final two). Soprano Guanquin Yu is Leonora, mezzo-soprano Raehann Bryce-Davis is Azucena. Vladimir Stoyanov and Morris Robinson are respectively the Count di Luna and the head of his henchmen, Ferrando. 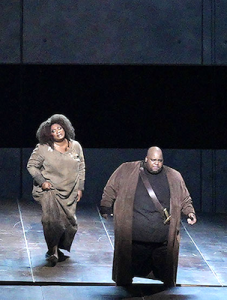 The production is a revival of Director Francisco Negrin’s, previously performed in Monte Carlo, Madrid and Copenhagen.

[Below: Leonore (Elza van den Heever, left) is reunited with her husband Florestan in the new Matthew Ozawa production of Beethoven’s “Fidelio”.] 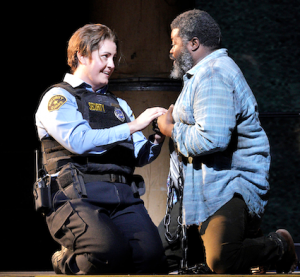 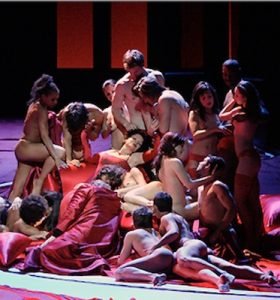 The 2007 production caused a sensation because of the vivid sexuality of the Venusberg scene, shocking some Angelenos to the same degree that one expects the citizens of the Wartburg were shocked when they learned of Tannhäuser’s visit to the goddess Venus’ lair.

The second part of a trio of inter-related productions of the three Mozart operas with Lorenzo da Ponte libretti. “Marriage of Figaro” premiered in Fall 2019. “Don Giovanni” will follow in June, 2022.

[Below: Guglielmo (John Brancy, left) and Ferrando (Ben Bliss, right) are disguised as Albanians in the San Frandsco Opera production of Mozart’s “Cosi fan Tutte”; edited image, based on a production design, courtesy of the San Francisco Opera.] 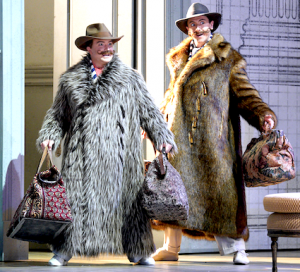