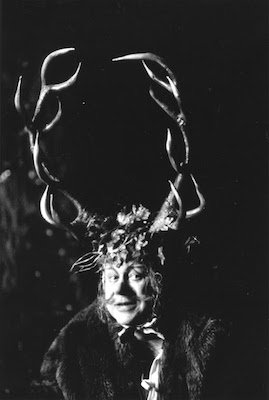 Note from William: This post continues my series of observances of historic performances that I attended at San Francisco Opera during the general directorship of Kurt Herbert Adler. This is the thirteenth of fourteen such observances of performances from the company’s 1966 Fall season.

In what would be his final career performance at San Francisco Opera’s War Memorial Opera House (and the last time I would ever see him perform), Chilean baritone Ramon Vinay made a brilliant impression in the title role of Verdi’s “Falstaff”. Vocally robust, Vinay’s performance delved into the humanity of Shakespeare’s devious character.

Although I was present at his performances as a baritone only as part of San Francisco Opera’s 1964, 1965 and 1965 seasons, I was struck at the what an extraordinary operatic artist he was.

[Below: Sir John Falstaff (Ramon Vinay, right) asks a boy to deliver a message for him; edited image, based on a Margaret Norton photograph, courtesy of the San Francisco Opera Archives.] 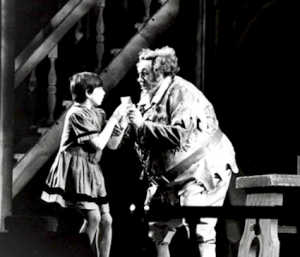 [Below: John Falstaff (Ramon Vinay) is tricked into making a fool of himself at the Hearne Oak; edited image, based on a Margaret Norton photograph, courtesy of the San Francisco Opera.] 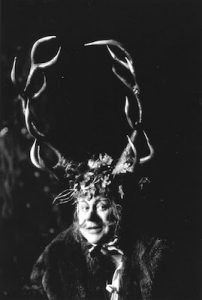 The role of Mistress Ford was sung by Bulgarian soprano Raina Kabaivanska. She bought a spinto voice to the role, with inherent beauty. She was always an impossing presence.

This was my first opportunity to be present at one of her performances (although four seasons earlier I had the choice of seeing either her or Spanish soprano Victoria de los Angeles perform the role of Desdemona to James McCracken’s Otello. I chose wisely, because de los Angeles never returned to San Francisco, and, four seasons in the future, I did see Kabiavanska’s Desdemona, who performed again with McCracken). 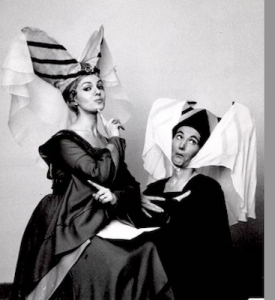 Czech mezzo-soprano Sona Cervena was an invaluable member of the San Francisco Opera family, taking on both lead and comprimario roles of the mezzo and contralto repertories, including Verdi’s Quickly. In assessing Cervena’s Quickly, I tried, not always successfully, to avoid comparing her to my first Quickly, the formidable Italian mezzo Giulietta Simionato [Historical Performances: “Falstaff” with Evans, Simionato, Stewart – San Francisco Opera, October 11, 1962], who, at that time for me, was the definition of a Quickly without equal. But Cervena’s performance was solid and enjoyable.

Mistress Page – a comprimario, rather than lead role – was performed by California mezzo-soprano Janis Martin, whom I had admired since I first saw her perform in 1961. As the 1960s progressed, Martin’s roles would move higher into the soprano range and the dramatic power of Martin’s voice would become increasingly evident.

[Below: Janis Martin was Mistress Page; edited image of an historical photograph.] 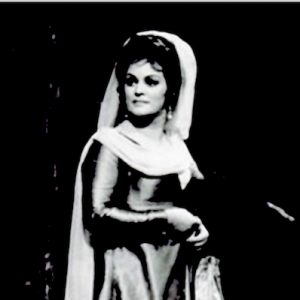 All the enchantment that the Hearne Oak scene requires, in which children are disguised as elves and pixies, was provided by Connecticut lyric soprano Lee Venora. Her expressive voice and beautifully controlled vibrato had the right touch of musical magic for what is the opera’s most endearing scene. 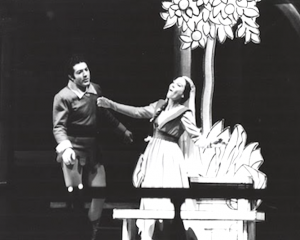 Venora’s performances in San Francisco in the mid-1960s were intertwined with her appearances in musical theater at New York City’s Lincoln Center, especially the mid-1960s revivals of Wright’s and Forrest’s “Kismet” and Rodgers’ and Hammerstein’s “The King and I”.

Although Venora was only in her mid-30s, this afternoon performance proved to be her last for the San Francisco Opera, and her operatic and musical theater performances became much rarer as the 1960s progressed.

Pennsylvania baritone Frank Guarrera was a serviceable Ford. I had not seen Guarrera perform in the ten years since he sang the lyric baritone role of Guglielmo [Historical Performances: “Cosi Fan Tutte” with Schwarzkopf, Rankin, Munsel, Lewis and Guarrera, San Francisco Opera in San Diego, October 25, 1956]. I would see him for the last time a week later, as Escamillo in Bizet’s “Carmen”.

[Below: Frank Guarrera was Ford; edited image of a publicity photograph.] 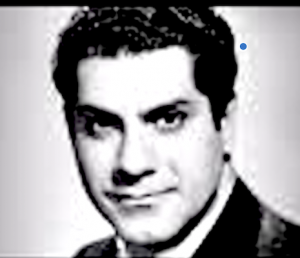 Tenor Raymond Manton was Falstaff’s very funny squire Bardolf. Manton was the San Francisco Opera’s reigning character tenor for two decades, performing roles in every one of the seasons between 1955 and 1975.

As impressive Manton’s performance record was, it paled in comparison to English-born California baritone Colin Harvey who in 1939, then General Director Gaetano Merola cast as Prince Yamadori in Puccini’s “Madama Butterfly”.

[Below: Falstaff (Ramon Vinay, center) verbally spars with his two henchmen, Bardolfo (Raymond Manton, left, kneeling) and Pistola (Federico Davia, right) as he is served by the Innkeeper (Colin Harvey, standing, second from left); edited image, based on a Margaret Norton photograph, courtesy of the San Francisco Opera Archives.] 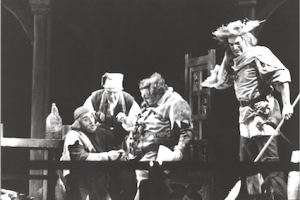 The production photograph, above, shows the tall Federico Davia standing. In fact, he had a few days earlier broken his leg, so he sang, sitting at stage right, rather than taking part in the physical stage business. Davia with great comedic timing, made it all work. His Pistola was one of the most memorable parts of the performance.

The San Francisco Opera Orchestra was led in a spirited performance by Maestro Francesco Molinari-Pradelli.

As with Vinay and Venora, this was the last time I was to see this artist perform. Molinari-Pradelli’s decade long relationship with the San Francisco Opera would end later that week with a final performance of “Madama Butterfly”.

I was to see onr final performance of the San Francisco Opera’s 1966 season one week later – Bizeet’s “Carmen”.