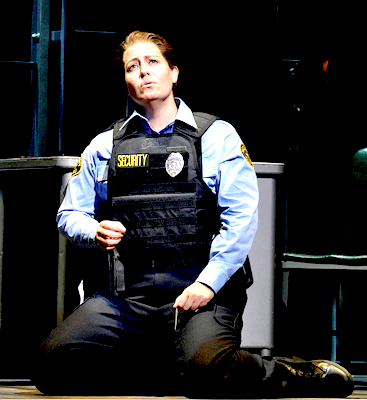 Matthew Ozawa’s new production of Beethoven’s “Fidelio”, the second offering of the San Francisco Opera’s 99th season, proved to be a memorable experience. Beethoven’s opera is an indictment of the practice of imprisoning political critics of a sovereignty.

Ozawa, assisted by Alexander V. Nichols’ arresting set design, brilliantly achieved the underlying premise of his production – to create the image of a contemporary state prison that would have the same emotional impact on current audiences as the prison that Beethoven conceived for “Fidelio” would have had on his audiences of 1814. 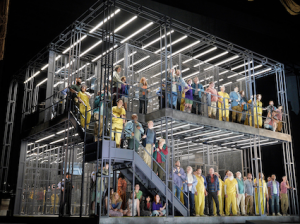 Nichols’ set not only resonated with Beethoven’s original purpose in writing the opera, it facilitated the exposition of Beethoven’s music. Five of the seven principal characters and both of the two comprimario cast members (the two prisoners) have an aria. Each of the opera’s arias and ensembles – duets, trios and the famous quartet – are masterpieces of Beethoven’s melodic construction, each signifying strong emotional exchanges between characters.

“Fidelio” provided the vehicle for South African soprano Elza van den Heever to return to the War Memorial Opera House after an absence of 14 seasons. Dressed as a security guard, she proved to be dramatically persuasive, impressively portraying a person of opposite gender. Importantly, she demonstrated that her widely regarded vocal skills included a mastery of Beethoven’s carefully designed musical form.

Her aria Abscheulicher! Wo eilst du hin? is a Beethoven masterpiece. The aria invokes both the joy that Leonore feels to confirm that her husband is indeed still alive in the prison and the terror knowing that he is in grave danger because of the emnity of the prison warden Don Pizarro. Van den Heever’s performance conveyed the dramatic power of Beethoven’s formidable music.

[Below: Elza van den Heever as the Security Guard Fidelio; edited image, based on a Cory Weaver photograph, courtesy of the San Francisco Opera.] 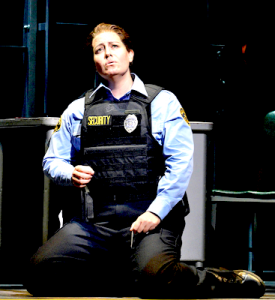 San Francisco Opera was an important part of van den Heever’s preparation for her successful operatic career. She was one of the company’s Adler Fellows, performing onstage in both the 2006-7 and 2007-8 seasons, including taking on the role of Donna Anna (to the Don Giovanni of Polish baritone Mariusz Kwiecien) after the final dress rehearsal(!) for the entire run of performances [Review: Kwiecien Excels in McVicar’s Dark Side “Don Giovanni” – San Francisco Opera, June 2, 2007].

Although much of her career during the intervening years has been based in Europe, van den Heever has appeared elsewhere in the United States during her 14 year absence from San Francisco. I reviewed another of her performances as Donna Anna (to the Don Giovanni of another former Adler Fellow, Lucas Meachem) [Review: The Man Who Loved Women, Lucas Meachem’s Empathetic Don Giovanni – Santa Fe, July 31, 2009]. I also reviewed her Armida [Review: Handel’s “Rinaldo” in Chicago – Francisco Negrin’s Finely Sung, Fun-filled Fantasy – Lyric Opera, March 16, 2012] and her performances of the title roles of Bellini’s “Norma” [Review: The Dallas Opera’s “Norma” – Vocally Outstanding, Dramatically Persuasive, April 21, 2017] and Handel’s “Alcina” [Review – Santa Fe Opera’s “Alcina”: Beautifully Sung Enchantment – July 29, 2017]. Her Leonore/Fidelio is another triumph for this gifted artist.

Florida tenor Russell Thomas performed the role of Leonore’s imprisoned husband, Florestan. Although the character does not appear in the first half of the opera, he is a powerful presence in the opera’s climactic scenes, including performing the dramatic aria Gott! Welch dunkel hier!. Thomas demonstrated both vocal power and expressiveness in performing the glorious music Beethoven composed for this heroic character. 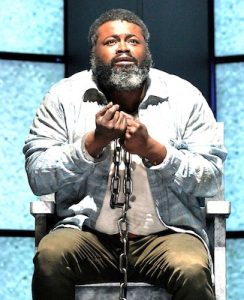 This is the first time I have seen him perform in German. Thomas had previously been announced for the title role of “Parsifal” at the Houston Grand Opera (subsequently canceled because of the Covid-19 pandemic). He is preparing for the title role of “Tannhauser” for future performances. [See Rising Stars: An Interview with Russell Thomas.]

The role of Don Pizarro was played with chilling effectiveness by Louisiana baritone Greer Grimsley (earning him during curtain calls the friendly chorus of boos that American audiences routinely give those artists who portray villainous characters well). This was my second opportunity to hear Grimsley as Don Pizarro. Previously, he sang in a Santa Fe Opera Stephen Wadsworth production, set in a Nazi German prison [Review: A Finely Crafted “Fidelio” from Stephen Wadsworth – Santa Fe Opera, July 31, 2014.]

A highlight of the evening was Grimsley’s vocally powerful and darkly sinister performance of Pizarro’s aria Ha! welch’ ein Augenblick!, enunciating the sentiment that a political enemy like Florestan (a crusader against Pizarro’s corruption) must be destroyed. No age is free of tyrants who would subscribe to such an idea, and the 21st century offers too many examples of leaders who likely would not hesitate to put the idea into practice.

[Photo: Greer Grimsley as Don Pizarro, plotting the death of an enemy who is a political prisoner under his care; edited image, based on a Cory Weaver photograph, courtesy of the San Francisco Opera.] 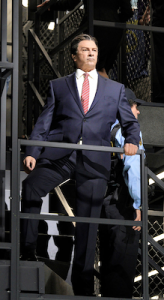 Few artists have had so many of his roles and his performances reviewed on this website as Grimsley, including the role of Wotan in three separate cycles of Wagner’s “The Ring of the Nibelung” and such iconic bass-baritone roles as the Dutchman [Review: Grimsley, Lindstrom Launch a Sonically Lavish, Visually Dazzling “Flying Dutchman” – San Francisco Opera, October 22, 2013], Claggart [Review: Superbly Cast and Conducted, the Los Angeles Opera’s “Billy Budd” is a Theatrical Triumph – February 22, 2014] and Scarpia [Review: A Top Notch “Tosca” from Alexia Voulgaridou, Gwyn Hughes Jones and Greer Grimsley – San Diego Opera, February 13, 2016]

The character of the jailer Rocco was performed by Washington bass James Creswell, with the sonorous voice and dramatic instincts one expects of this talented artist. Rocco sings one of Beethoven’s more light-hearted arias, Hat man night auch Gold beineben,which Creswell did masterfully. Intelligent staging accompanied Creswell’s singing, including Rocco’s moving between the set’s interior rooms, stairwells and exterior spaces during ensembles with the other characters.

[Below: Rocco (James Creswell, right) resists the entreaties of the prison warden Don Pizarro (Greer Grimsley, left) to murder a prisoner whom Pizarro considered to be a political enemy; edited image, based on a Cory Weaver photograph, courtesy of the San Francisco Opera.] 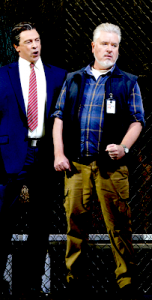 The only member of the cast that I had not seen perform previously was Canadian lyric soprano and current San Francisco Opera Adler Fellow Anne-Marie MacIntosh as Marzelline, Rocco’s daughter. Marzelline has become smitten by the new guy at work, not suspecting that Fidelio is (1) married and (2) a woman. I am quite willing to believe, based on the music that Beethoven wrote for this character (including the sprightly, if delusional, aria O wär ice schon mit dir vereint), that Beethoven seemed fond of her.

[Below: Anne-Marie MacIntosh as Marzelline; edited image, based on a Cory Weaver photograph, courtesy of the San Francisco Opera.] 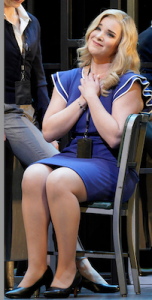 Jacquino, Marzelline’s boyfriend prior to Fidelio’s arrival, although aria-less, still has ample opportunity to press his case for Marzelline’s affections, and whose patience is ultimately rewarded. The role, sung by Georgia lyric tenor and current Adler Fellow Christopher Oglesby, did effectively showcase Oglesby’s attractive voice and decent acting. 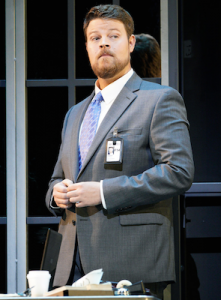 I had liked Oglesby in previous assignments as an Adler Fellow, but especially liked his appearance as Jacquino.

“Fidelio” ends with the arrival of a government official, Don Fernando, performed authoritatively by District of Columbia bass Soloman Howard. Howard’s Fernando arrests Pizarro and reunites Leonore and Florestan, to provide a happy ending to an intense opera.

[Below: Soloman Howard as Don Fernando; edited image, based on a Cory Weaver photograph, courtesy of the San Francisco Opera.] 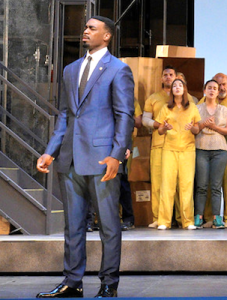 [Below: Zhengyi Bai as the First Prisoner; edited image, based on a Cory Weaver photograph courtesy of the San Francisco Opera.] 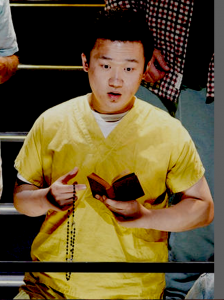 [Below: Maestra Eun Sun Kim; edited image, based on a publicity photograph from eunsunkim.com.] 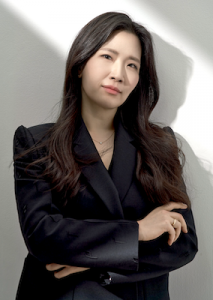 Chorus Master Ian Robertson, in one of his last and most impressive assignments before his retirement at the end of 2021, presided over an extraordinary performance by the San Francisco Opera Chorus.

[Below: Chorus Master Ian Robertson; edited image, based on a publicity photograph, courtesy of the San Francisco Opera.] 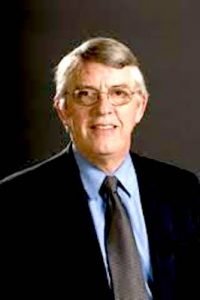 The production’s creator, Matthew Ozawa (whose own father was born in a World Wat II Montana internment camp for Japanese-Americans), in developing the production, asked: “How could we create a structure that would depict the facility, the system, and the tiers of people who inhabit it? We were cognizant that the opera’s original setting of the late 18th century was close to the time period in which it was written and premiered. It would have felt very contemporary and relevant to those that saw it [in 1814]. Therefore, we set our production in a recent past or near future detention facility, somewhere in the world. This setting allows us to investigate contemporary structures that remove those that are deemed an ‘other’ and a threat and to give voice to those who have been powerless to speak.”

[Below: Director Matthew Ozawa; edited image, based on a publicity photograph from L2 Artists.] 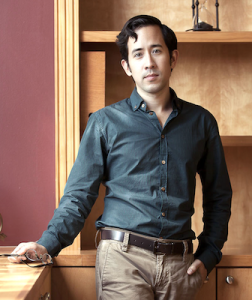 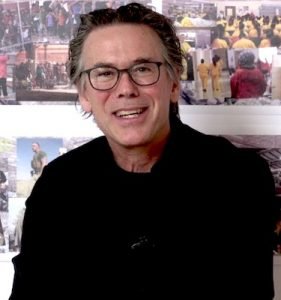 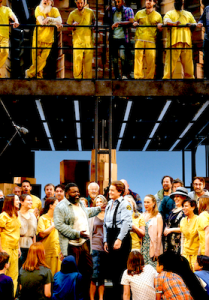 The co-lighting designers were JAX Messenger and Justin A. Partier.

The San Francisco Opera “Fidelio” production is an extraordinary experience, which I would recommend for both the veteran opera-goer and for persons new to opera.

For my accounts of historical San Francisco performances of “Fidelio” that I attended at the War Memorial Opera House, see: