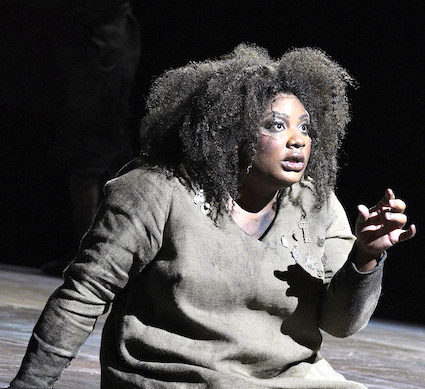 The Los Angeles Opera opened its 2021-22 season with Mexican director Francisco Negrin’s production of Verdi’s “Il Trovatore”, returning to the Los Angeles Music Center’s Dorothy Chandler Pavilion after a Covid-19 pandemic cancellation of its 2020-21 season. I reviewed a live Sunday matinee telecast of the fourth in the series of six performances.

Missouri tenor Limmie Pulliam performed the role of Manrico, the troubadour of the opera’s title, displaying a richly resonant spinto voice. Although it was fully evident that Pulliam possesses the vocal power that the role requires, the afternoon’s most memorable moments came during the great third act aria Ah si, ben mio. In it, Pulliam perfectly balanced the softly sung, vocally controlled beginning adagio with the lyrical beauty of the aria’s famous middle part Fra quegli estremi aneliti.

[Below: Manrico (Limmie Pulliam, right)is at the side of his mother, Azucena (Raehann Bryce-Davis, left); edited image, based on a Cory Weaver photograph, courtesy of the Los Angeles Opera.] 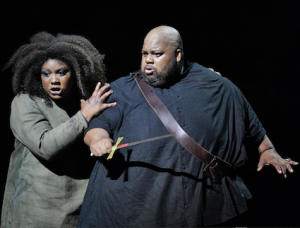 The performance of Texas mezzo-soprano Raehann Bryce-Davis as the Romani woman Azucena, was extraordinary. Still early in her career, Bryce-Davis has amassed worldwide recognition through wins at prestigious European competitions and, in the United States, the receipt of the George London award.

Bryce-Davis’ wide vocal range includes sufficient power in the lower register to assay the roles traditionally associated with the contralto voice, with a brilliant top that Bryce-Davis used for Azucena’s arias and duets

[Below: Raehann Bryce-Davis as Azucena; edited mage, based on a Cory Weaver photograph, courtesy of the Los Angeles Opera.] 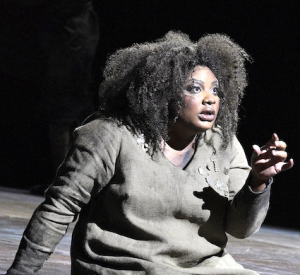 Verdi was known to have been so fond of the Romani elder Azucena that he had considered naming the opera after her. In Negrin’s production, Azucena is not only a dominating presence in the three Verdi scenes in which she appears, but is assigned extra-textual duties throughout the opera.

[Below: Guanqun Yu as Leonora; edited image, based on a Cory Weaver photograph, courtesy of the Los Angeles Opera.] 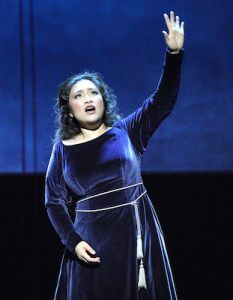 [Below: Vladimir Stoyanov as the Count di Luna; edited image, based on a Cory Weaver photograph, courtesy of the Los Angeles Opera.]

Georgia bass Morris Robinson was an imposing Ferrando. He set the opera’s somber mood with the first scene, narrating with his sonorous basso the horrors that occurred a generation earlier – a Romani woman burned at the stake for witchcraft at the time that the old Count’s younger son disappeared.

[Below: Morris Robinson as Ferrando; edited image, based on a Cory Weaver photograph, courtessy of the Los Angeles Opera.] 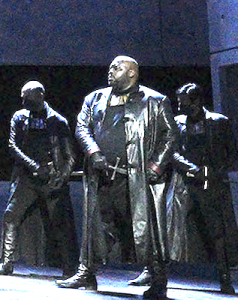 See my interviews with this former football star at Rising Stars – An Interview with Morris Robinson and Return to L. A. – A Conversation with Basso Morris Robinson.

The excellent Los Angeles Opera Orchestra was conducted in a rousing performance by the company’s music director, Maestro James Conlon. Preceding Conlon’s afternoon on the podium, a taped scholarly lecture on “Trovatore” by Conlon introduced his insightful ideas on the opera.

[Below: Maestro James Conlon; edited image of a publicity photograph.] 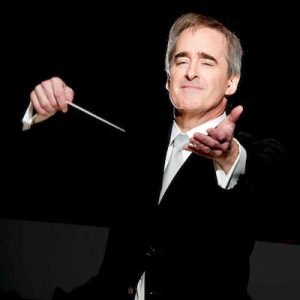 [Below: Maestro Grant Gershon; edited image, based on a publicity photograph, courtesy of the Los Angeles Opera.] 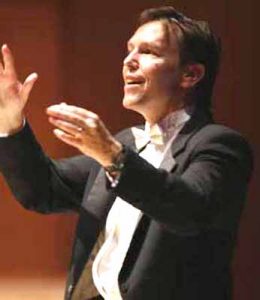 The chorus members (who were divided into male soldiers and female nuns in Negrin’s complex physical production), met the challenges of choral singing in non-traditional settings. 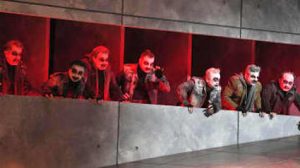 Mexican director Francisco Negrin begins with the concept that all of “Il Trovatore’s” characters (excepting Leonora) are psychological captives of past events centered around the old Count di Luna’s immolation of Azucena’s mother for witchcraft.

Below: Mexican director Francisco Negrin; edited image, based on a photograph from www.negrin.com.] 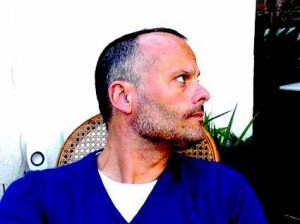 To demonstrate the past’s hold on everything that takes place in the opera, Negrin introduces extra-textual characters – the spirit of Azucena’s mother and the grim reaper. These characters also include Azucena’s true son whom she, in a hallucinatory moment mistakenly threw into the burning fire consuming her mother, but who exists now in Azucena’s mind as a young boy.

The motive of fire recurs throughout the opera, with Azucena often present in scenes in which she has no part in the opera’s libretto and musical score.

[Below: Azucena (Raehann Bryce-Davis) recalling her mother death; edited image, based on a Cory Weaver photograph, courtesy of the Los Angeles Opera.] 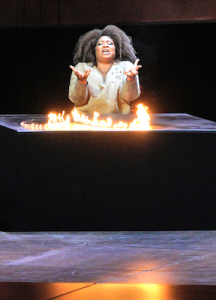 Negrin further emphasizes the grip that the past horrors hold on the opera’s characters by transforming the men of the chorus into an otherworldly crew, with surreal costumes and makeup. 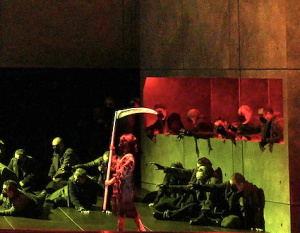 [Below: French director Louis Désiré; edited image, based on a publicity photograph.] 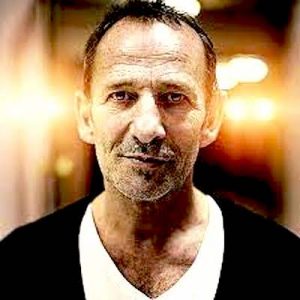 The opera’s events were contained in a unit set, with a square block at audience left (which from time to time would emit flames). The block is used for various bits of dramatic action – becoming the stake on which Azucena’s mother was burnt, the Romani camp’s anvil or a nunnery’s central furnishing.

Rectangular openings in the lower walls at the back and at stage right and left provided additional spaces for stagecraft, acting at times as a kind of a dugout for soldiers.

[Below: Louis Désiré‘s unit set; edited image, based on a Cory Weaver photograph, courtesy of the Los Angeles Opera.] 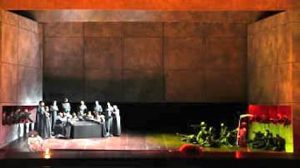 I do not dispute the proposition that virtually all of the action in “Trovatore” is a consequence of the events that happened the night the di Luna family murdered Azucena’s mother. Negrin has created a reality based on his ideas on what exists in Azucena’s dreams and other manifestations of her subconscious. Azucena becomes the center of a world where all that currently exists is directly impacted by what happened in that time long ago.

Negrin’s ideas are both persuasive and provocative. For me, a particularly interesting image was of the dying Leonora tethered to a long rope held by at one end by one of di Luna’s henchmen, allowing Leonora to enter the cell in which Manrico and Azucena are held in accordance with the agreement between di Luna and Leonora, but preventing any strategem that would allow Leonora’s escape.

At first, Manrico moves into a position halfway down the rope between Leonora and the Count’s man. Then, as the last scene continues, Azucena moves to the far end of the rope taking that end from the hands of di Luna’s man. Manrico is midway on a long tether between the end held by his mother and the end restraining the woman to whom he was moments away from marrying.

That image has suggested to me an essay I want to write about Azucena, Manrico, the education that had to have taken place for Manrico to become (or at least seem to be) a knight and a troubadour, and his military service in the army of the Prince who is di Luna’s enemy. “Trovatore” gives us lots of information on Azucena’s backstory, and it would be fascinating to know more of Manrico’s.