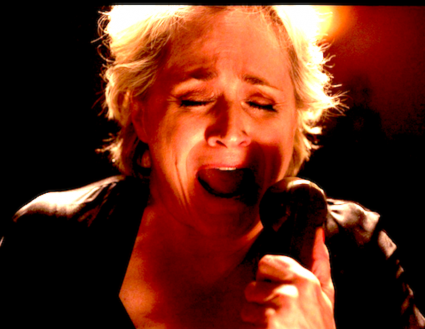 Note from William: The following is a review of a filmed performance of “La Voix Humaine”.

In 1958, French composer Francois Poulenc set a short play by French poet/dramatist Jean Cocteau to music.  Cocteau’s 1930 play was for a single character, a distressed woman engaged in a telephone call with a lover who has broken up with her. Poulenc’s 50-minute opera is written for a soprano who possesses both the acting and vocal resources to sustain audience interest over the opera’s course.

New Hampshire soprano Patricia Racette portrayed Elle, a woman desperately trying to cope with a flood of emotions during the final hours of a five-year affair. The man with whom she spent these past years will be married to another woman the next day. We as the audience share with her a final telephone call to that man, hearing only her side of the conversation. We watch her pace the room, telephone in hand, as she shares her thoughts with a man whom we can believe is over their affair, which she clearly is not.

[Below: Patricia Racette as the Woman; edited image, based on an Michael Thomas photograph, courtesy of Opera Philadelphia.] 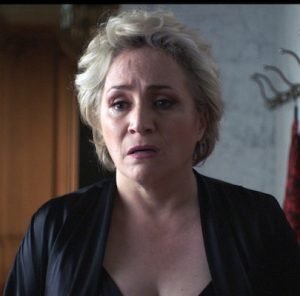 Operas, whether composed during the baroque era, contemporary times or at some point between, are almost invariably musically structured in ways that limit the amount of time and the degree of flexibility an individual artist has to inhabit an opera character. This might be because an opera’s plot requires interactions of multiple characters, each of whose amount of time singing has limits, or because the musical forms in fashion at a point in time impose a structure that the opera’s composer is expected to follow.

In contrast, “Voix humaine” from its earliest conception as a play, has been designed to provide a diva (a term always associated with this work) the opportunity to unleash the full range of her skills. She is the only artist onstage, and her role encompasses emotions from the petty to the melodramatic – annoyance at discontinuous telephone service and party line interruptions followed by utter anguish as she contemplates what she is losing.

It has always been an obvious role for Racette, who, over a three decade career has created vivid portraits of many of opera’s most extraordinary women, including almost all of the major female roles in the Puccini canon. Throughout the “Voix Humaine” performance, Racette demonstrated technical vocal control and dramatic resourcefulness, whether for Elle’s moments of steadfast calm or for her outbursts of rage.

[Below: Elle (Patricia Racette) is despondent that an affair is ending; edited image, based on a a Michael Thomas photograph, courtesy of Opera Philadelphia.] 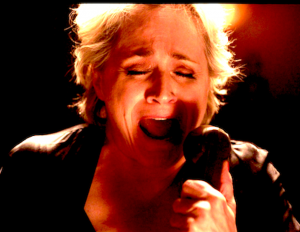 The opera has two performance traditions – the soloist singing either with a full orchestra or with only piano accompaniment. I had seen the opera performed twice before at the San Francisco Opera, once with Italian soprano Magda Olivero in 1979 and six years later with Montana soprano Karan Armstrong, both with full orchestra.

Racette in the past has performed the role with both the orchestral version and the version with piano accompaniment. In a conversation that I had with her (that will be posted on this site at a future date), Racette expressed her preference for singing with the piano rather than the full orchestra. The role, she noted, is filled with sudden pauses and an irrregular vocal line that can be followed easily by a knowledgeable piano accompanist. For such an unconventional opera, it’s much trickier for a conductor to coordinate both the artist onstage and the all the instrumentalists in the orchestra, which tends to decrease the spontaneity that composer and librettist had intended.

[Below: Elle (Patricia Racette) is immersed in conversation with the man she had spent the five years with; edited image, based on a Michael Thomas photograph, courtesy of Opera Philadelphia.] 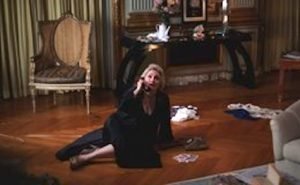 Few artists are as accomplished at creating such a wide range of dramatically revelatory portraits of women as Racette, whose career I have had the privilege of following for over three decades. Racette’s vocal power is undiminished, allowing her to excel at challenging roles as stylistically diverse as Minnie [Review: Impressive, Compelling – “Girl of the Golden West” at Santa Fe Opera, July 1, 2016] and Kolstenicka [Review: Wilde, Racette, Lewis in Dramatically Intense, Melodic “Jenufa” – Santa Fe Opera, July 24, 2019]. 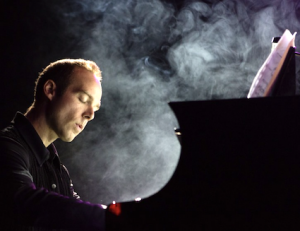 Watching and listening to Racette and Allen perform the opera, I became convinced that the piano accompaniment – certainly when a actor of Racette’s ability is present – is preferable to the orchestral version.

Staging “Voix Humaine” was the responsibility of California director James Darrah. Rather than the work performed on an operatic stage, it was set in an elegant interior in the historic Elkins Estate in Montgomery County, Pennsylvania, where it was filmed. The result was a wholly satisfying theatrical experience, providing an extraordinary venue for Racette’s strong performance. 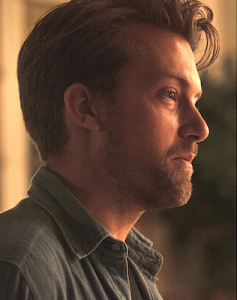 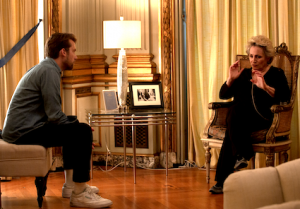 I recommend Opera Philadelphia’s film of Poulenc’s “La Voix Humaine” to both the veteran opera goer and person new to opera for Patricia Racette’s impressive vocal and theatrical performance.