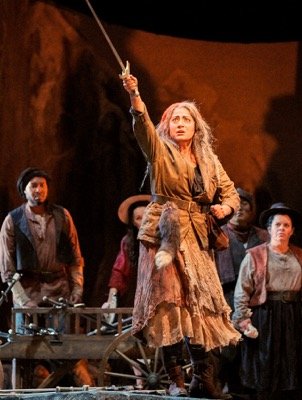 The Seattle Opera’s production of Verdi’s “Il Trovatore” casts two artists for the principal roles, each singing four of the eight scheduled performances, while other cast members perform their role eight times. This report is of Sunday matinee, which was the Seattle Opera debut for each of the opera’s four principal artists – Angela Meade, Martin Muehle, Michael Mayes and Nora Sourouzian – who are scheduled also to sing the performances of January 19, 23 and 26, 2019.

My review of the previous evening’s performance [Review: Crocetto, Rawls, Lynch and Gabouri Lead Seattle Opera’s Vocally Solid, Rethought “Trovatore” – January 12, 2019] contains both my general comments on the production and for all of the performers except for the four artists discussed below.

Meade has established herself internationally as a performer of the first rank in the bel canto repertory [See Osborn, Meade and Jenis in Graham Vick’s Mounting of “Guglielmo Tell” – Teatro Regio Torino, May 7, 2014and Legend Making at the Kennedy Center: Angela Meade’s First Norma – Washington National Opera, March 9, 2013].

[Angela Meade as Leonora; edited image, based on a Jacob Lucas photograph, courtesy of the Seattle Opera.]

A particularly striking moment in Meade’s superb performance was the “convent scene” in which two opposing armies arrive to prevent Leonora from taking vows. In the concertato that ends the scene, Meade’s voice soared beautifully and with elegance in one of Verdi’s most iconic passages for the soprano voice.

German spinto tenor Martin Muehle was a convincing actor and effective in both the lyrical and dramatic vocal passages that make Manrico one of most challenging of Verdi’s heroic tenor roles.

[Martin Muehle as Manrico; edited image, based on a Jacob Lucas photograph, courtesy of the Seattle Opera.]

Manrico, through Verdi’s often intense musical line, is expected to display a range of emotions throughout the performance, notably in his relationships with the courtly Leonora and with Azucena, who has raised him as his mother. Muehle proved without question to be an excellent Manrico.

[Michael Mayes as the Count di Luna; edited image, based on a Philip Newton photograph, courtesy of the Seattle Opera.]

A forceful presence both vocally and dramatically, Mayes effectively conveyed the ferocity that is at the heart of the Count di Luna’s persona, while showing sensitivity to the sentiment of di Luna’s aria Il balen.

Especially noteworthy is the furious display of sword fighting by Mayes as di Luna and Muehle as Manrico.

Canadian mezzo-soprano Nora Sourouzian brought a power mezzo voice and dramatic presence to the role of Azucena, in a production whose emphases departed from custom.

Instead of Azucena being portrayed as a crazed gypsy, Director Dan Miller cast her as a key figure in a rebel movement of long duration. Sourouzian fulfilled Miller’s vision of Azucena as a strong-willed, strategically motivated woman.

[Nora Sourouzian as Azucena; edited image, based on a Jacob Lucas photograph, courtesy of the Seattle Opera.]

Director Dan Miller presents the events of “Trovatore” as the violence of two military and social forces engaged in warfare lasting more than a generation. Their excesses require that the sons and daughters of the both sides dedicate their lives to vengeance.

Miller’s presentation of the symbols of savagery (bodies are piled in the di Luna courtyard; the ashes of the infant di Luna are carried around in a silver urn and are even used ritualistically).

Much of the story that “Il Trovatore” is concerned with has taken place before the opening curtain. The preceding events that we must know about are narrated in arias sung by Ferrando and by Azucena (the arrest and execution of Azucena’s mother; the kidnapping and disappearance of an infant di Luna; the accidental death by fire of Azucena’s infant son) or by Leonora (the arrival of a mysterious knight who wins a tournament and whom she has crowned victor; and that knight’s subsequent night-time appearances to serenade her).

Director Miller has created effective flashbacks to the grisly deaths of Azucena’s mother and infant son through means of prominent silhouetted pantomimes that take place on a scrim at the back part of the stage. Azucena and her dying mother both cry out for vengeance.

In “Trovatore” the vengeance motive transcends the love motive. Manrico, an effective warrior for the rebel side, and Leonora, a woman of importance in the enemy sovereign’s court, have fallen in love. Instead of their romance helping bring peace between the combattants, their deaths exact the vengeance to which Azucena has devoted her life, and the cycle of violence surely continues.

I recommend the opera, production and the casts both to the veteran opera goer and the person new to opera.