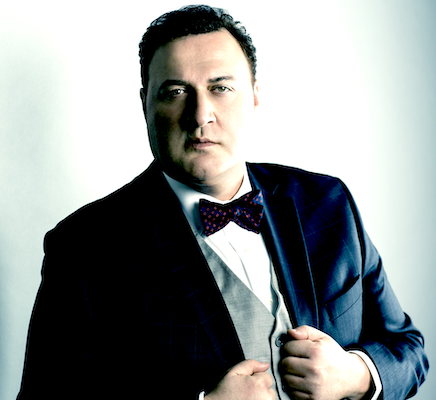 The following conversation follows up on my 2016 in-person interview with George Gagnidze, when he was preparing for a performance of Amonasro with the San Francisco Opera in a new Francesca Zambello production of “Aida”.

Gagnidze returned to California in May 2022 to perform the role of Amonasro at the Los Angeles Opera, in their mounting of the Zambello production, conducted by Maestro James Conlon.

Wm: George, I interviewed you six years ago in San Francisco when you were in rehearsals for the Zambello production’s premiere [Verdi and Verismo: An Interview with Baritone George Gagnidze]. Since that conversation in 2016, the world has experienced some shocks, a long-lasting pandemic and the invasion of a neighboring European country by a great power.

How has the pandemic affected you and your career?

GG: Of course the pandemic was a huge shock for all of us, and especially for everyone working in the business. I was very fortunate to be able to reprise singing after a few months in September 2020, but still I lost a lot of work: two productions at the Met, where I was rehearsing “Tosca” in February and March 2020 at the beginning of the outbreak and the following year “Nabucco”, including a Live in HD transmission, “Rigoletto” in San Francisco, “Otello” in Dallas, and I could go on… But on the other hand I enjoyed having so much time with my family in Georgia, where usually I am only spending a few weeks in the year. Now I had a very, very busy last couple of months, and I wasn’t home since February.

Wm: You were a child in the 1970s when the Republic of Georgia was breaking ties with the old Soviet Union, ultimately declaring independence. This had to have an impact on you. As a child, were you part of a musical family?

GG: Very much so. My father, who was a college professor, sang Georgian folk music for a hobby. My sisters and I sang as children, and we were involved in Georgian folk dancing.

Wm: I was struck particularly by an observation that you made in our 2016 interview: “I think about Amonasro and his people’s relationship to the great power, Egypt, and my own homeland, Georgia, which also is located near a great power. I find the story of the opera very interesting, with Amonasro’s emotional attachment to his daughter and his love for his country.”

Your operatic repertory has a strong association with the works of Giuseppe Verdi, many of whom have relevance to the nationalistic Italian risorgimento against imperial forces that regarded Italy as “belonging” to them.

GG: Yes, and for me it’s unavoidable not to think about what is happening at the moment in Ukraine, and what happened to my country Georgia in 2008. Since Russia attacked Georgia back then, 20% of the country has been occupied by the Russians. We all feel so much with our brothers and sisters in Ukraine, since we have been in a very similar situation. We were just fortunate that the Russians stopped and didn’t try to occupy the whole country.

But in Georgia, we are all terrorized watching what Vladimir Putin is doing in Ukraine. There is a great fear that Georgia might be next. It is more important than ever for all countries living Western values to stand united, and it is so important that the West’s response to Russia’s aggression is very strong and that Ukraine will win this war. 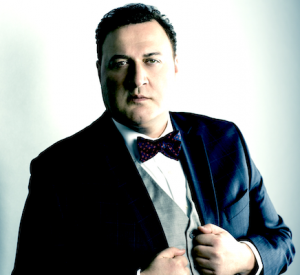 Wm: You were the first prize winner at the 2005 Busseto Verdi competition (Concorso Voci Verdiani), whose jury was tenor Jose Carreras and soprano Katia Ricciarelli. You performed Rigoletto’s very demanding aria Cortigiani under the baton of Maestro Lorin Maazel. What are your thoughts on that competition?

GG: This was the beginning of my international career. It led to my debut at La Scala in 2007 as Germont in “La Traviata”. I worked with Maestro Maazel after the Busseto competition in a world tour of “La Traviata”.

[Below: George Gagnidze as Rigoletto in the 2010 Los Angeles Opera production of Verdi’s “Rigoletto”; edited image, based on a production photograph, courtesy of georgegagnidze.com.] 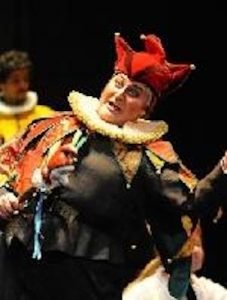 GG:  I find the role of Rigoletto to be the most challenging of the Verdi baritone roles, both dramatically and vocally. You cannot approach the role unless you are fully committed to it as an actor. At the same time, the role’s vocal demands, especially the breath control needed for its long passages of legato mean you cn never be inattentive to how you are singing. In my opinion, the amalgamation of vocal and acting demands on an artist performing Rigoletto match those of the role of the Baron Scarpia in Puccini’s “Tosca”.

Wm: How do you prepare for a role whose acting requirements – regardless of which production is being performed – are as demanding as those of Rigoletto or Scarpia?

Wm: Congratulations are in order for your impressive Orfeo CD recording of operatic arias, which displays your range of operatic styles.

[Below: the cover of the Orfeo CD of George Gagnidze arias.] 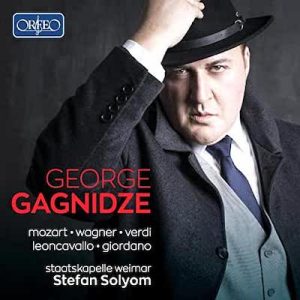 GG: Many thanks! I am very happy about the positive response for this album. Through this album I wanted to show as many aspects as possible of a baritone voice and I wanted to show a bit my development as an artist, recording arias from Mozart which I sang at the beginning of my career, to Verdi and Verismo which are at the core of my current repertoire, to Wagner, who is a composer I might tackle in the future. 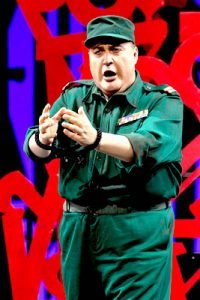 Wm: I have seen two separate Francesca Zambello productions of “Aida”, one from the 2012 Glimmerglass Festival [Review: Role Debuts All Around in Intimate “Aida” – Glimmerglass Festival, July 23, 2012] and the other the San Francisco Opera production that is being revived in Los Angeles [Review: Zambello’s Spectacular “Aida”, San Francisco Opera, November 5, 2016]. In the latter production you performed the the role of Amonasro which you are performing again for the Los Angeles Opera. I’ve found that Zambello’s insights into “Aida” are illuminating.

[Below: Aida (Latonia Moore, left, in green dress) is careful not to reveal that her father Amonasro (George Gagnidze, right) is the leader of the conquered Ethiopians; edited image, based on a Cory Weaver photograph, courtesy of the Los Angeles Opera.] 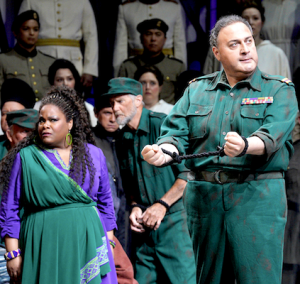 What are your thoughts on working on Francesca Zambello’s production again?

GG: I was so happy to return to perform in this beautiful and so well-made and thought-through production. It is always a huge pleasure to work with Francesca Zambello. She knows the piece and text like few other people and is able to combine in a unique way two important elements of this Verdi opera – its grandeur, with stunning images and gorgeous colors, and its very intimate side. 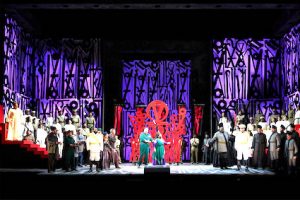 In this staging, the inner conflicts and the conflicts between the protagonists are worked out so well and Francesca has a great sensibility of how to work with us singers in a way that we all bring out the best of us acting wise. It’s an awesome production and it’s fantastic to be back to perform in this staging.

Wm: What are you most looking forward to in the next few years?

GG: I am very excited for this coming season. My schedule is filled with so many wonderful roles in theatres and festivals I love. After this Aida, I’ll head to Madrid for another Verdi part, Nabucco at the Teatro Real. This will be followed by a short trip to London for a concert performance of Puccini’s “Il tabarro” as Michele. Then I will be back in the US, making my house debut at the Dallas Opera as Rigoletto and I’ll end the year performing-wise at the Metropolitan Opera, where I’ll be Amonasro again.

In 2023 I’ll return to Barcelona for a new production of “Tosca” at the Gran Teatre del Liceu, followed by a very exciting debut as High Priest in “Samson et Dalila” at the Berlin Staatsper conducted by Daniel Barenboim. It has been a while since I have sung a French opera, I think the last one was Rossini’s “Guillaume Tell” when I was in the ensemble of the Weimar Opera House in Germany 15 years ago, so I’m really excited about that. Then I will sing Rigoletto in Hamburg and will complete my season at the Met with more performances of “Aida”. With this run I will have sung more than 25 performances as Amonasro just at the Met, where I made my role debut in 2015, and I’m very proud of that.

Wm: Thank you once again.