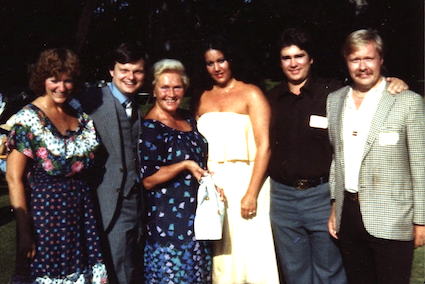 In observance of the hundredth season of the San Francisco Opera, whose performances I have attended since my middle and high school years, I am conducting a series of conversations with artists associated with the company. The first of these conversations is with American bass Kevin Langan, who participated in the company’s Merola young artists Program in 1979 and 1980 and made his company debut in the 1980-81 season. 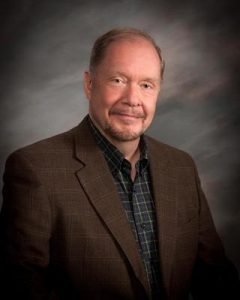 Wm: I ask all my interviewees about their earliest recollections of music, and of opera. What were yours?

KL: My love of music goes back to February 9, 1964 when I was eight years old and saw The Beatles on “The Ed Sullivan Show”.  I was transfixed by them and became a lifelong fan of their music and music in general. I am an avid collector of their memorabilia. I own one of only two existing copies of John Lennon’s book “In His Own Write”. It is a first edition copy from 1964 and contains autographs of all four members of the band signed during their first American Tour in 1964 to a Disc Jockey in Dallas Texas when they played there. 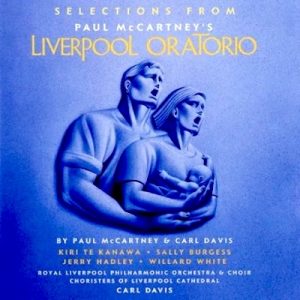 I personally met Paul McCartney in 1991 in the auditorium of Carnegie Hall during the final dress rehearsal of his first classical piece, “The Liverpool Oratorio”. I was a guest of Jerry Hadley, who was the tenor soloist. Jerry arranged for me to meet Paul during the rehearsal break. I told Paul that The Beatles were the reason I embraced music and eventually went into a career in opera. Paul told me I was the first person he had ever met that The Beatles had inspired to go into opera!  It was Karma, I replied.  I was born in Greenwich Village in New York City into a Catholic family, and the priest who baptized me was named Father John Lennon.

Wm: What events in your life led to your decision to pursue vocal performance academically and as a career?

KL: I always wanted from junior high school on to perform onstage in musicals, and did so in numerous school musicals and in summer stock shows on the New Jersey Shore where I grew up. A trip to Europe in my junior year of high school to tour in an All-County Choir introduced me to the world of classical music. We visited and sang in Salzburg and Vienna among other cities. I came home and decided to take voice lessons and go to college to study classical voice.  My local voice teacher in New Jersey put together a production of Gounod’s “Faust” in which I sang the role of Wagner and fell in love with opera. I had never seen an opera before this experience, but I was bitten and knew what I wanted to do.

I spent my first two years in college at The New England Conservatory of Music (NEC) in Boston, but had a bad voice teacher who left me singing worse in two years than when I first got there.  I did however attend the final concert tour Maria Callas gave with Giuseppe Di Stefano in Boston in February, 1974. After the concert I went backstage and met Callas one-on-one in the Green Room at Symphony Hall in Boston. 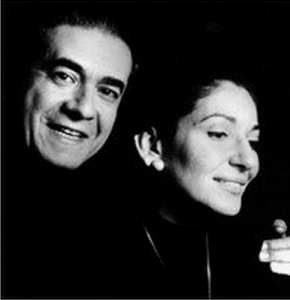 I told her I was 18 years old and wanted a career in opera, and asked if she have any advice for me. She said; “You are a very handsome young man. Everyone will tell you what to do; sing louder, sing softer, sing this faster, this slower.” She put her hand on my heart and said; “Always remain true to this whenever you sing.  This is what is most important.  Remember this always. I wish you luck young man.”  I carried that moment throughout my whole career as a singer.

I knew I needed a better teacher than NEC could provide. My college roommate said the best teacher of voice he knew of was the famous dramatic soprano Margaret Harshaw who taught at Indiana University (IU) and the Curtis Institute in Philadelphia. So I auditioned for Harshaw at IU and she accepted me into her studio in 1975 as an undergraduate transfer Junior. 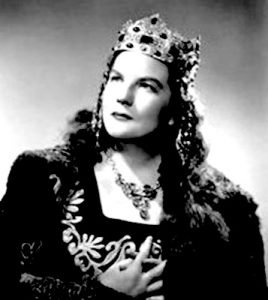 Wm: I had become interested in opera when Margaret Harshaw was still performing. Although I never saw Harshaw in an operatic performance, I did attend her performances singing Wagnerian opera in concert with the San Diego Symphony at the open-air Balboa Bowl.

What did you learn from Harshaw, vocally and from the standpoint of operatic performance?

KL: I studied with Harshaw for five years at IU, two as an undergraduate and three as a graduate student.  She understood the voice and how to sing regardless of one’s gender.  She taught the Garcia Method of Singing which she had learned from her teacher Anna Schoen-Rene at Juilliard from 1936 to 1942. Harshaw had won The Metropolitan Auditions of The Air, and then had a 22-year career singing at The Met, before going to IU in 1962 to begin a 32-year career teaching voice.

Schoen-Rene, her teacher, had been a student of Pauline Garcia-Viardot, so the Garcia Method had been passed down directly to Harshaw in that fashion. Hundreds of singers in the 19th and 20th century worked with teachers who were direct descendants and disciples of the Garcias and their technique, perfected by Manuel Garcia, Senior. The method is a flawless technique, and if learned properly will give the singer the tools for bel canto singing and the longevity to do it for decades.

Harshaw taught over 1,000 singers in her lifetime, dozens of whom had careers in opera worldwide and many who now teach the next generations of singers around the world. The technique she gave me has allowed me to have a career now 44 years in length, to sing healthily, and to maintain the sheen of the voice by remaining in my fach and never pushing beyond my limitations in repertoire.

Wm: It was at Indiana University that you came to the attention of Elisabeth Schwarzkopf, who was an important artist in San Francisco Opera history, singing several roles at the San Francisco Opera at the mid-20th century. I was high school when as first saw her, as my first ever Fiordiligi in Mozart’s “Cosi fan Tutte”. She was also my first Donna Elvira in Mozart’s “Don Giovanni” and my first Marschallin in Richard Strauss’ “Der Rosenkavalier.”

Tell me about your association with her.

KL: In 1978 I sang in a master class in 1978 at Indiana University given by Elisabeth Schwarzkopf and her husband Walter Legge, who ran the classical opera division at EMI for many years and was responsible for many of Callas’ opera recordings.  They heard me, and Mr. Legge offered to sponsor me in a recital at The Wigmore Hall in London, England in 1979. He said he wanted to make me his protégé, and would guide my career as I began the transition to professional singing upon graduating from Indiana University.

[Below: Soprano Elisabeth Schwarzkopf (left) and her husband, EMI’s Walter Legge; edited image, based on a historical photograph from the Regge-Museum, Hohenems, Austria.] 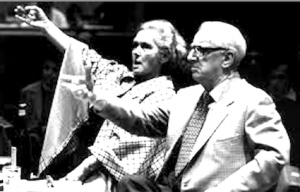 Unfortunately, Legge passed away two months before I did the Wigmore recital. I had prepared a two-hour recital. A week before the recital Schwarzkopf worked with me on repertoire for a week in which I had her all to myself. Then, Schwarzkopf presented me at the recital, and, after the London recital, arranged for me to sing for a number of Intendants in Europe. 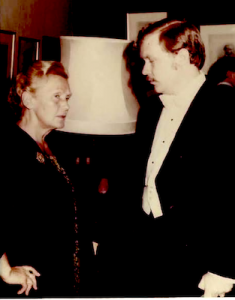 Upon learning I would attend San Francisco Opera’s Merola Program for young artists in the summer of 1979, Schwarkzkopf alerted General Director Kurt Herbert Adler that she felt I would be a valuable asset to his company upon completing my apprenticeship in the Merola Program.  Thus, Adler knew of me through Schwarzkopf a few months before I arrived in San Francisco to start the Merola summer.

Wm: One of the milestones of the San Francisco Opera’s first hundred years took place approximately one third through the first century with the creation of the Merola program in 1957 (the same year as the Santa Fe Opera Apprentices program was created). You took part in the 22nd and 23rd Merola programs. What was the impact of your two Merola summers on your career?

KL: In Summer 1979 we did production of Bizet’s “Carmen” and Weber’s “Der Freischutz” in San Francisco’s Stern Grove. I was in the chorus for “Carmen” and sang the role of the Hermit in “Freischütz” with Maestro Adler conducting. I also sang a role in Wolf-Ferrari’s opera “Le Donne Curiose” at the Paul Masson Winery in Saratoga (Santa Clara, County). In the 1979 Merola finals competition I placed fifth.

Previously, Ms. Schwarzkopf had arranged for me to audition in May 1979 with Sir John Tooley, then General Director of the Royal Opera House Covent Garden in conjunction with my Wigmore concert. Based on that audition I had been offered a Royal Opera House apprentice contract to begin in 1980.

However, upon completing my first summer in Merola in 1979, I was contacted by Bill Mason, then the San Francisco Opera’s Artistic Administrator, to be offered a contract for six roles in the 1980 International Fall Season a year later as well as an offer to return to Merola in 1980 to complete a second season in the Apprentice Program just prior to beginning that Fall Contract. I chose to accept the San Francisco Opera offer over the one from the Royal Opera House. I believe Maestro Adler had been pleased with my work in the 1979 Merola, chiefly due to the role in “Der Freischütz” which Adler had conducted, my participation in his Master Class and the strong recommendations from Ms. Schwarzkopf.

I graduated from Indiana University with my Masters Degree in May, 1980, then sang Sarastro in a production of Mozart’s “Zauberflöte” with Opera Theatre of St. Louis, then proceeded directly to the 1980 Merola program. There, I immediately began rehearsals for my first Fall International Season at San Francisco Opera.

KL: In 1980 we Puccini’s “La Rondine” at Stern Grove and Britten’s “Albert Herring”, in which I sang Superintendent Bud, at the Paul Masson Winery.

[Below: 1980 Merola participants Kevin Langan (left) and Thomas Hampson (right) in a scene from Britten’s “Albert Herring” performed at the Paul Masson winery; edited image, based on an historical photograph, courtesy of Kevin Langan. 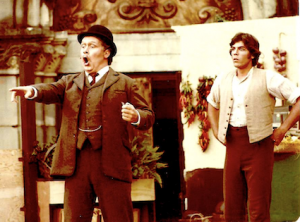 We also had classes with performance coach Wesley Balk on movement, and on our repertoire with tenor James Schwabacher and Kurt Herbert Adler. In both Merola summers Schwarzkopf held Master Classes for Merola participants. Because I had worked with her several weeks earlier, I did not participate in her 1979 class. But in 1980 I did get to follow up working with her again at Merola. 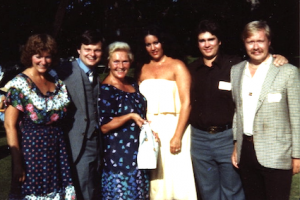 Schwarzkopf’s classes were primarily focused on her forte – interpretation of our repertoire. The classes were extremely valuable to all of us.

At the 1980 Merola program’s finals competition, I placed second behind Merola Apprentice and Ohio native coloratura soprano Sally Wolf, amopther Harshaw student at Indiana, who would go on to a major career in opera – most notable for her portrayal of the Queen of the Night in “Die Zauberflote” in most of the world’s great opera houses (including the San Francisco Opera in 1991) and whom I married in 1983!

[This series of conversations will continue with the Fall 1980 season and Kevin Langan’s San Francisco Opera debut.]