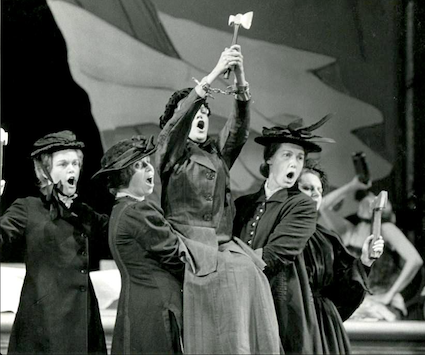 Douglas Moore’s biographical opera “Carry Nation” provided a pyschological portrait of the infamous leader of the American movement for prohibition of alcoholic beverages. Commissioned by the University of Kansas in celebration of its 100th anniversary, “Carry Nation” was first heard in late March, 1966 as a production of the music department of the KU’s campus in Lawrence. Its professional premiere took place at the War Memorial Opera House as the fourth production the San Francisco Spring Opera’s 1966 season.

The opera, whose libretto was written by Pennsylvania author and advertising writer William North Jayme, chronicles the tormented life that drove Carry’s extraordinary career. Her interactions with her mentally unstable mother, her “fire and brimstone” fundamentalist Christian father and her drunken husband Charles all scarred her.

Georgia mezzo-soprano Beverly Wolff assayed the title role, which she had created at Kansas University ten weeks earlier and would repeat two years later at her home company, the New York City Opera, including a recording of the NYCO production.

[Below: Mezzo-soprano Beverly Wolff; edited image of a publicity photograph]

A compelling actress in highly dramatic roles, Wolff portrayed Carry’s personal journey from dutiful daughter to violent social activist. The opera begins well into that journey with a scene in which Carry leads a group of women in the act of “smashing” a saloon.

The opera then moves introspectively, to the impact on Carry’s childhood of her mentally challenged Mother and domineering father. Although her romantic involvement with Charles, a boarder in the family home, brought momentary happiness, his self-destructive alcoholism led Carry to pursue the anti-liquor mission that became her life’s work.

[Below Carry (Beverly Wolff, right) has fallen in love with the boarder Charles (Richard Fredricks, left); edited image, based on a production photograph, courtesy of the San Francisco Opera Archives.]

Bass-baritone Kenneth Smith, appearing in his only role ever with San Francisco Opera, made a strong impression vocally as Carry’s father.

[Below: the Father (Kenneth Smith, right) shows his contempt for his son-in-law Charles (Richard Fredricks, left); edited image, based on a production photograph, courtesy of the San Francisco Opera Archives.]

Appearing as the mentally challenged mother was soprano Ellen Faull, in an insightful characterization – my only opportunity ever to attend one of Faull’s performances.

[Below: Soprano Ellen Faull; edited image of a publicity photograph.]

Faull had been performed in a previous San Francisco Opera main season 13 years prior, in three roles. Among those roles was Donna Anna in Mozart’s “Don Giovanni” in a cast of legends that included Italian basses Nicola Rossi-Lemeni and Italo Tajo respectively as the Don and Leporello and New York tenor Jan Peerce as Don Ottavio, conducted by Italian Maestro Tullio Serafin. The Donna Elvira for those performances was fellow New York Opera soprano Beverly Sills, who was not to return to the San Francisco Opera for 18 seasons.

American director Frank Corsaro staged the work, in a smoothly-flowing series of episodes, utilizing the simple sets attributed to Eldon Eller. Corsaro famously promoted the replacement of “stand and sing” operatic performance with Stanislavsky-influenced “method acting”. Corsaro’s reputation for innovative, style-setting productions was formidable, which several decades later resulted in his being one of the first (2008) class of recipients of the National Endowment for the Arts Opera Honors award.

“Carry Nation” was the only production Corsaro ever staged for the San Francisco Opera., although II was able to see his work performed elsewhere [for example, Lyric Opera Revives Inventive Corsaro-Perdziola “Faust”: Chicago November 3, 2009].

[Below: The sets representing Carry’s childhood home; edited image based on a production photograph, courtesy of the San Francisco Opera Archives.]

The conductor, Maestro Herbert Grossman, was a specialist in contemporary music. He had also introduced Floyd’s “Susannah”, Ward’s “The Crucible” and Britten’s “The Turn of the Screw” to the San Francisco Opera’s Spring Opera Theater, although only “Susannah” has ever been performed by the main company. Although associated with the New York City Opera, he spent the years 1966-68 as music director of San Francisco Opera’s low-budget touring company, the Western Opera Theater.

[Below: Composer Douglas Moore; edited image of a publicity photograph from spotify.com.]

Attending the performance, in the box closest to stage left (just above the orchestra seat in which I was sitting) was the opera’s composer Douglas Moore. “Carry Nation” brought to mind the homespun melodies of American folksongs – at their most interesting in the orchestral passages, but less effective in the conversational vocal writing.

The composer’s best known work – the 1956 opera “The Ballad of Baby Doe” – was later to have its only at the San Francisco Opera in the company’s 2000 main (fall) season.