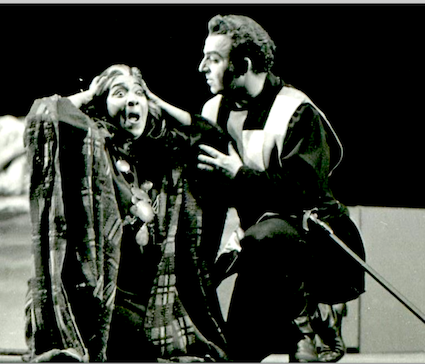 Note from William: This post continues my series of observances of historic performances that I attended at San Francisco Opera during the general directorship of Kurt Herbert Adler. This is the fifth of five such observances of performances from the company’s 1966 Spring Opera Theater season.

California tenor Baldo dal Ponte performed the role of Manrico, the troubadour. He possessed a robust spinto voice of appropriate weight for Verdi’s dramatic tenor roles. Spring Opera Theater’s two “Trovatore” performances were his only appearances with the San Francisco Opera. Although he performed Radames in Verdi’s “Aida” at Seattle Opera a decade later, his career was mostly centered in Europe, and this was my only opportunity everto attend one of his performances.

[Below: Manrico (Baldo dal Ponte, right) attempts to calm Azucena (Betty Allen), the woman who raised him as her son; edited image, based on a production photograph, courtesy of the San Francisco Opera Archives.]

Cast as Azucena was Georgia mezzo-soprano Betty Allen, who gave a powerful performance, both vocally and dramatically. I would see her again five years later in the San Francisco Opera’s main company. She was La Frugola in Puccini’s “Il Tabarro” as part of a stellar cast led by Leontyne Price as Giorgetta and French baritone Gabriel Bacquier as Michele.

[Below: Mezzo-soprano Betty Allen; edited image of a publicity photograph.]

The Leonora was soprano Carol Todd. She was an invaluable comprimario singer in the company’s main seasons for most of the 1960s. General Director cast her in several principal roles in the Spring Opera Theater, which earned her a main season assignment a few months later as Micaela in Bizet’s “Carmen” in a cast that included Grace Bumbry, Jon Vickers and Frank Guarrera.

Boatwright sings the role of the villain Crown in two recordings of Gershwin’s “Porgy and Bess”, the first with Leontyne Price as Bess and WIlliam Warfield as Porgy, the second the complete recording conducted by Maestro Lorin Maazel. Boatwright was a protege of such luminaries as contralto Marian Anderson (and twice the winner of the award named for her) and Composer Leonard Bernstein. Boatwright sang at jazz musician Duke Ellington’s funeral in 1974 (and several years later married Ellington’s sister) and also sang at the inauguration of President Jimmy Carter. For many years Boatwright taught voice at Ohio State University.

After his di Luna, Boatwright never performed again for the San Francisco Opera, although there would be an indirect tie to the San Francisco Opera’s 1967 season. Several weeks after his San Francisco June performances as di Luna, he traveled to the Hamburg where, at the Staatsoper in October 1966, he created the lead role of Carter Jones in Gunther Schuller’s searing opera about violence towards an African-American involved with a white woman, Miss Hampton (Jeannette Scovotti) in a Southern town. The Hamburg cast included Simon Estes as Uncle Albert.

[Below: Baritone McHenry Boatwright; edited image of a publicity photograph.]

California bass-baritone Harold Enns proved to be an authoritative Ferrando. During the six main San Francisco Opera seasons 1954 through 1958, Enns had performed 17 comprimario roles. He returned to the San Francisco Opera in two principal roles for the 1966 Spring Opera Theater season – which also included Raimondo [Historical Performances: San Francisco Spring Opera’s “Lucia di Lammermoor” – May 31, 1966]. He would return again in principal roles the 1967 and 1969 Spring Opera seasons, before concentrating his career on lieder concerts that included a recording of lieder. He later performed during the with the Los Angeles Master Chorale.

[Below: Harold Enns’ photograph on the cover of his album of Schumann and Wolf Lieder; edited image of a vinyl record cover.]

The very wise George Bernard Shaw was quoted as saying that every opera lover should see “Il Trovatore” at least once a year. I saw my first “Trovatore” in 1964 and now my second in 1966. Over the years I’ve discovered locating a yearly “Trovatore” performance in whatever places I happen to be each year is a challenge I’ve not been able to meet, but I have gone out of my way to do as good a job as possible in responding to Shaw’s dictum.