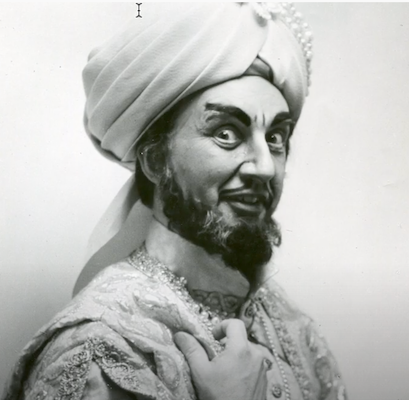 [Below: Mezzo-soprano Helen Vanni; resized image of a publicity photograph.]

Vanni, as had always been my experience, performed stylishly, providing an interpretation that differed markedly from Horne’s by eschewing the broadest of the comedy that Horne brought to the role, while leaving its own strong positive impression.

The Mustafa was bass Herbert Beattie, the only member of the 1966 cast that had participated in the 1964 performances. He again sang Mustafa’s patter skillfully and fully realized the comic possibilities of this iconic buffo role.

[Below: Bass Herbert Beattie, here as Osmin in Mozart’s “The Abduction from the Seraglio”; edited image, based on a YouTube screenshot.]

The Elvira was soprano Karan Armstrong, whose Spring Opera debut was her first role with a major opera company, and took place in the same year as she won the New York Metropolitan National Council Auditions.

Although she returned to Spring Opera Theater three years later in a smaller role in Puccini’s “La Rondine”, she only sang one role in a main San Francisco Opera season – that, the Woman in Poulenc’s “La Voix Humaine” – 20 years after her Spring Opera Theater debut as Elvira.

[Below: Soprano Karan Armstrong in 1974; edited image of an publicity photograph]

Also in the cast was Donna Petersen, who, during her years at the San Francisco Opera was a go-to artist for the many mezzo-soprano comprimario roles.

I was most impressed with the foursome of Vanni, Beattie, Armstrong and Petersen. The remaining cast members were tenor Rafael Sevilla as Lindoro and baritone Gimi Beni as Taddeo.

When “L’Italiana” was performed in 1964, the conductor was Maestro Henry Lewis, at that time Marilyn Horne’s husband. The new cast’s conductor, in his Spring Opera Theater debut, was Maestro Evan Whallon. Six years earlier Whallon had been a winner in Maestro Eugene Ormandy’s competition for young conductors. Long associated with the Chatauqua Opera Festival, Whallon served as that company’s music director. Whallon’s only other San Francisco Opera assignment was two years later, conducting Mozart’s “Abduction From the Seraglio” with Herbert Beattie performing the role of Osmin.

Traditionally, the compositional styles of three early 19th century Italian composers – Rossini, Donizetti and Bellini – have been associated with the phrase “bel canto”. In my essay “Bel Canto” in the Adler Years at San Francisco Opera, Part I (1954-1957) I spoke of how few performances of works of these three composers took place during the first 30 years of the San Francisco Opera’s existence.

In 1954 Austrian emigre Kurt Herbert Adler was named San Francisco Opera’s General Director. A significant enlargement of the operas in the company’s performance repertory took place, with vigorous attention to the “bel canto” operas. The company’s first four decades had favored Donizetti with performances in multiple seasons of the dramatic “Lucia di Lammermoor” and all three of Donizetti’s most famous comedies – “L’Elisir d’Amore”, “Don Pasquale” and “La Fille du Regiment”. Bellini, as mentioned in the essay hyperlinked above, had only a single performance of “Norma” in 1938, but no other performance of any of his operas.

Rossini fared better in that his most famous comedy “Barber of Seville” was performed in several seasons spanning the three decades during which Adler’s predecessor, Gaetano Merola, the company’s founder, served as the company’s General Director. In the first nine seasons of the Adler general directorship, “Barber” was never performed at the War Memorial Opera House and only a single performance on the company’s tour to Los Angeles occurred during this period.

“Barber’s” first War Memorial appearance in the Adler era was as a vehicle for Marilyn Horne’s Rosina (joined by Herbert Beattie’s Doctor Bartolo) at the 1962 Spring Opera Theater), one of six Rossini roles Horne would perform for the San Francisco Opera between 1962 and 1992

For communications, please use the e-mail site [email protected]