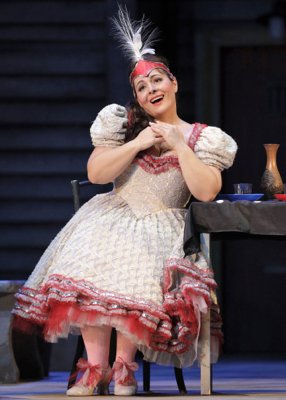 Cura’s production moved the locale of both operas into an imaginary rural village, whose culture is inspired by the Italian emigrant La Boca neighborhood of Buenos Aires, Argentina. In Cura’s conceptualization, the action of both operas takes place within a day or two of each other and characters from each opera appear in the other.

The main characters in “I Pagliacci” are Canio, Nedda, Tonio, Silvio and Beppe.

For the part of the jealous and violence-prone actor Canio, the San Francisco Opera welcomed back Italian spinto tenor Marco Berti. He portrays a man who regards Nedda, a woman whom he rescued from poverty as a young girl, as a possession who must be forever subservient to him.

[Below: Canio (Marco Berti) sings of his dismay at having to amuse the public when he is in such personal distress; edited image, based on a Cory Weaver photograph, courtesy of the San Francisco Opera.] 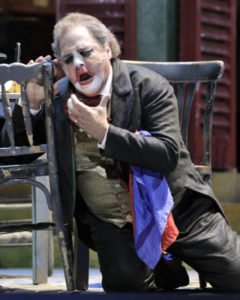 This is the eighth Marco Berti role over the past dozen years of performances I’ve reviewed. I have appreciated his warm, full tenor, so appropriate to the vocally heavier roles of the later Verdi, Puccini and the composers of late 19th century Italian verismo operas [See, for example, my review of his Radames in An Admirable “Aida”: Hui He, Berti, Smirnova, Kelsey Are Impressive – Lyric Opera of Chicago, March 15, 2012.]

Berti received an ovation for his powerful and nuanced Vesti la giubba (sung at table in Mamma Lucia’s tavern), an aria that, recorded a dozen year’s after the opera’s world premiere by opera tenor Enrico Caruso, became the first phonograph record in history to sell a million records.

Armenian Lianna Haroutounian has delighted San Francisco Opera audiences (including, of course, myself) with her displays of the vocal expressiveness, power and stamina required for performances of Tosca and Madama Butterfly, the iconic title roles of two of Puccini’s most often performed operas [See Review: A Transcendent “Madama Butterfly”, San Francisco Opera, November 6, 2016.]

The role of Nedda does not require all of the vocal weight of her previous roles heard in the large but acoustically friendly War Memorial Opera House, but it does require vocal agility for the escapist “bird song” Stridono lassu and a lyrical sweetness for the melodies of her “make up” duet with her lover Silvio. Haroutounian’s success in meeting the requisites for Nedda’s role showed how wide-ranging her vocal talents are.

[Below: Lianna Haroutounian as Nedda playing the com media dell’arte character Colombina; edited image, based on a Cory Weaver photograph, courtesy of the San Francisco Opera.] 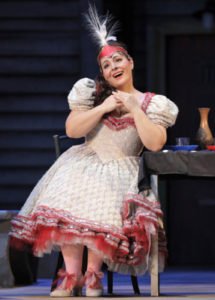 Platanias gave a gripping portrait of the sinister Tonio, whose reaction when Nedda rejects his unwanted advances was to alert the dangerously jealous Canio to Nedda’s infidelity. Platanias proved convincing as one of true villains in the traditional repertory of dramatic baritones.

[Below: Dimitri Platanias as Tonio; edited image, based on a Cory Weaver photograph, courtesy of the San Francisco Opera.] 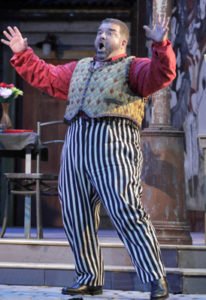 The role of Silvio is a treasure for a lyric baritone, whose relatively brief role part includes E allor perche, di’ tu m’hai stregato, one of the sweetest melodies in all of opera. Texas baritone David Pershall was charming in the role, with a voice that blended beautifully with Haroutounian’s in the music of their magical duet. (Because in this production Pershall was onstage during most of “Cavalleria” and the early parts of “Pagliacci”,  he didn’t have the luxury of time to warm up that most Silvios are afforded.)

Pershall was a convincing actor as well, first confronting Nedda for seemingly ignoring him, then obviously melting emotionally as he consoles her and plans their escape from Canio later that evening. 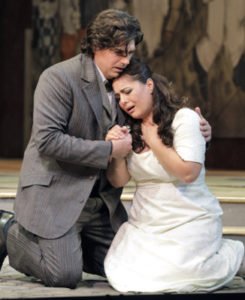 Rounding out the “Pagliacci” principal roles is the pagliaccio Beppe, who has to play the adult trying to quell the ultimately fatal conflicts between Canio, Nedda and Tonio, intending for the show to go on. New Zealander Adler Fellow Amitai Pati performed the role with distinction.

[Below: Amitai Pati as Beppe; edited image, based on a Cory Weaver photograph, courtesy of the San Francisco Opera.] 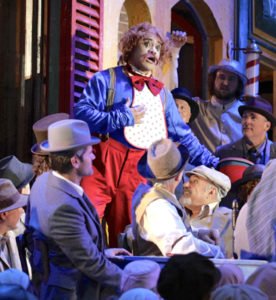 Other performers included Sebastian Vera Cuevas as a Paperboy, William O’Neill as a Citizen and Chester Pidduck as the Mayor. The San Francisco Opera Chorus, directed by Ian Robertson, filled the stage with individualized portraits of each of the villages men and women.

Although the program lists “Cavalleria Rusticana” as taking place on Easter Sunday and “Pagliacci” on the Feast of Assumption (August 15), the staging has the two operas taking place consecutively within a short space of time. As “Pagliacci” opens, the casket containing the body of Turiddu, who was killed at the end of “Cavalleria”, is carried from the Church. The pagliacci, who were seen in “Cavalleria” have invited the villagers to a late afternoon performance in the square outside Mamma Lucia’s tavern (where Silvio works).

Maestro Daniel Callegari, whose elegant conducting of “Cavalleria Rusticana” had highlighted both that opera’s melodic beauty and dramatic tension, was equally attentive to the lyricism and theatrical power of “Pagliacci”. Callegari’s intentions were effectively communicated by the always excellent, world class, San Francisco Opera Orchestra.

I enthusiastically recommend both operas and casts of the double bill, both for the veteran opera-goer and persons new to opera.