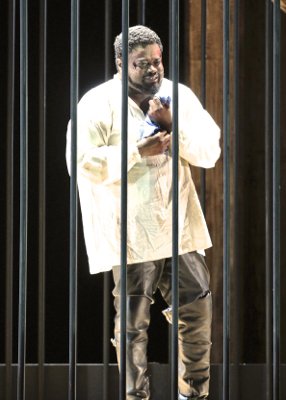 The San Francisco Opera mounted Donizetti’s “Roberto Devereux” with a cast, conductor and production that would rival any performance of the opera in the 18 decades since its premiere.

Illinois soprano Sondra Radvanovsky displayed mastery of one of Italian opera’s most challenging soprano roles. Radvanovsky’s Elizabeth is the center of several of the opera’s scenes, and whenever onstage, she is engaged in stressful encounters with her disgraced lover, the Earl of Essex, or with his opponents (Cecil) or advocates (the Nottinghams). Those encounters typically take the form of double arias (see my discussion towards the end of this review) which pair melodic legato passages with fiery cabalettas.

[Below: Sondra Radvanovsky as Queen Elizabeth I; edited image, based on a Cory Weaver photograph, courtesy of the San Francisco Opera.] 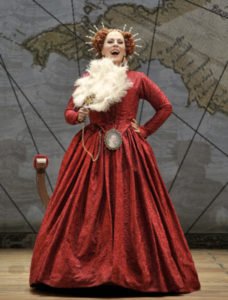 The most memorable, dramatic and most poignant cabaletta is the final aria of the opera, Elisabeth’s Quel sangue versato. In this affecting aria the Queen, in her bedclothes and without her famous red-haired wig, sings of her despair in having signed Roberto’s death warrant. At the aria’s end she agrees to James I assuming the English throne. (One should always avoid trying to learn your English history from Italian opera libretti.)

I have praised Radvanovsky’s vocal prowess and extraordinary acting ability in operas of Bellini, Verdi and Puccini. It is “Roberto Devereux’s” Elizabeth that gives one the best accounting of the full compass of Radvanovsky’s vocal and dramatic powers. Those who have seen her performance (in the Lawless production) as the heartbroken, elderly Elizabeth who sings Quel sang versato understand what an extraordinary singing actress Radvanovsky is, and how effectively she unlocks the dramatic power of Donizetti’s composition.

Georgia tenor Russell Thomas was memorable in the role of the Earl of Essex, Roberto Devereux. In one of Donizetti’s masterstrokes, Thomas’ Devereux and Radvanovsky’s Elizabeth engage in a furious cabaletta duet, each with their own melodic theme (Elizabeth’s Un lampo orribile and Devereux’ Nascondi frena i palpiti) that then merge into a spectacular shared melodic line. The audience’s applause for Thomas and Radvanovsky performance of this tour de force was explosive.

A highlight of any “Roberto Devereux” performance is Roberto’s solo scene in which he is imprisoned for execution. Thomas beautifully sang the double aria’s cavatina Come uno spirto angelico and then won a sustained ovation for performing its famous cabaletta (a principal theme of the opera’s overture), Bagnato il sen di lagrime

[Below: Russell Thomas as the condemned Robert Devereux, Earl of Essex; edited image, based on a Cory Weaver photograph, courtesy of the San Francisco Opera.] 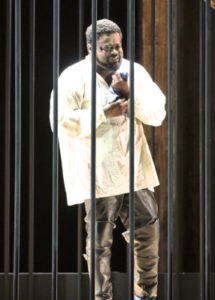 Thomas’ tenor voice has achieved such weight and power that opera company managements have invited him to prepare the title roles of Wagner’s “Tannhäuser” and “Parsifal” for seasons not yet announced [See Rising Stars: An Interview with Russell Thomas.]

A frequent colleague of both Radvanovsky’s and Thomas’ is Georgia mezzo-soprano Jamie Barton, who plays Sara, Duchess of Nottingham. Barton’s rich, warm, expressive mezzo has graced every role I have seen her assay and her Sara was beautifully performed and acted.

[Below: Sara, Duchess of Nottingham (Jamie Barton, left) is too late bringing the ring that would have prevented an execution to Queen Elizabeth (Sondra Radvanovsky, right); edited image, based on a Cory Weaver photograph, courtesy of the San Francisco Opera.] 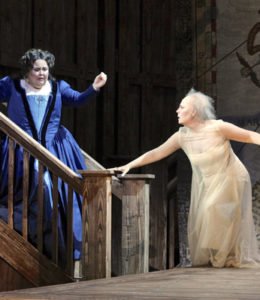 Andrea G. Manea as the Duke of Nottingham

Michigan Adler Fellow Andrea G. Manea was a late addition to the cast, when the originally announced baritone was injured in a traffic accident. Manea exhibited vocal technique, poise and confidence, holding his own in the company of the stellar trio of principals.

[Below: Andrea G. Manea as the Duke of Nottingham; edited image, based on a Cory Weaver photograph, courtesy of the San Francisco Opera.] 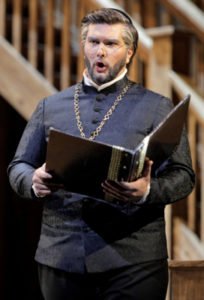 His attractive lyric baritone and insightful acting were especially effective in his scene confronting his wife Sara, after he has learned of her seeimgly illicit involvement with Roberto Devereux.

[Below: Amitai Pati as Lord Cecil; edited image, based on a Cory Weaver photograph, courtesy of the San Francisco Opera.] 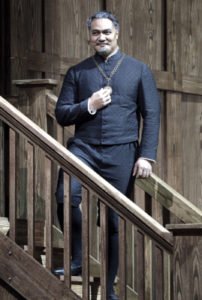 Donizetti and the Double Aria

Donizetti’s portraits of the Virgin Queen, the Earl of Essex, and the Duke and Duchess of Nottingham emerge through the convention of formulaic double arias, each of which ends with a dramatic flourish.

It is instructive to consider how these double arias work. A typical double aria begins with an ornamented slower melody, then ends in the artist performing two brilliantly scored verses of a rousing, fast-paced cabaletta. The cabaletta’s two verses are separated by the hustle and bustle  of a stretta in which further action, usually involving the chorus, takes place.

That structure follows the operatic conventions in place in the 1830s. Later in the 19th century, under the influence of Wagner and of the late 19th century French romantic opera composers, double arias fell into disfavor. Even with the mid-20th century revival of interest in the operas of Rossini, Donizetti and Bellini, often the strettas and cabaletta repeats were excised.

In recent years, however, interest has grown among artists and conductors in presenting the double arias without cuts. Some stage directors have discovered the inherent dramatic power that can be found in the best of them. In “Roberto Devereux” Donizetti obviously pushed the envelope on the double arias, and the cumulative dramatic effect is extraordinary.

The conductor is Italian Maestro Riccardo Frizza, whose interest and expertise in Donizetti’s operas has led to his appointment as the first director of a new annual international Donizetti Festival. That festival, which begins this coming Fall, is to be based in the composer’s home town of Bergamo, Italy.

Maestro Frizza’s rapport with the artists and with the San Francisco Opera Orchestra was obvious, and resulted in a truly satisfying musical performance. The excellent San Francisco Opera chorus, under the direction of Ian Robertson, had much to do, especially in the “council scenes” and other scenes in which the English crown’s affairs of state were a principal concern.

The physical production chosen was that of Director Stephen Lawless, as part of a three-opera Tudor series that includes Donizetti’s “Anna Bolena” and “Maria Stuarda”. [For my reviews of the three Lawless productions, see the 2012 “Anna Bolena” and 2014 “Roberto Devereux” reviews, listed above, and also The Donizetti Revival, Second Stage: Stephen Lawless’ “Maria Stuarda” in Toronto – May 4, 2010].

Director Lawless has been a consistent champion of Donizetti’s operas [See Opera as Drama: An Interview with Director Stephen Lawless].

The basic sets (created by the late Belgian designer Benoit Dugardyn) for the three operas suggest three levels of the “Wooden O” that was London’s Globe Theater. In “Roberto Devereux” staircases can be moved into place to suggest the Queen Elizabeth’s council room or the home of the Duke and Duchess of Nottingham or can moved apart to create the space in which the condemned Roberto Devereux is imprisoned. 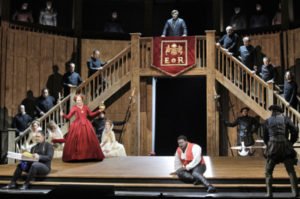 I enthusiastically recommend the opera, cast and production, both for the veteran opera-goer and for persons new to opera.

For serious opera-goers who might be able to get to San Francisco Opera for any of the remaining performances, I recommend making a special effort to see it.