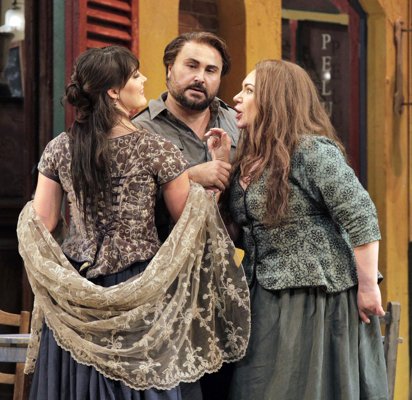 The most durable “double-bill” in opera is the linking of Mascagni’s “Cavalleria Rusticana” and Leoncavallo’s “I Pagliacci”, each performed separately with an intermission between them. Their similar tales of the lethal consequences of infidelity in small towns encouraged the Argentine singer, conductor, designer, director Jose Cura to create an imaginative production in which characters from each opera appear in the other.

The small village he envisioned was to be a rural microcosm of the urban neighborhood of La Boca, in the extreme Southeastern corner of Buenos Aires. Closely associated with the tango and gaily colored buildings, La Boca is populated by Southern Italian emigree families, whose exodus from Italy began in the decades after the two operas of the double bill premiered.

[Below: the village conceived by Jose Cura, in which all of the events in “Cavalleria Rusticana” and “I Pagliacci” take place; edited image, based on a Cory Weaver photograph, courtesy of the San Francisco Opera.] 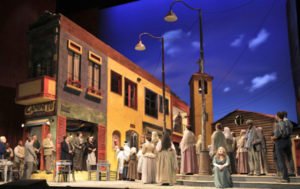 My review of the evening, the San Francisco Opera 2018-19 season opening night, will be divided into two parts, each posted separately, and each concentrating on the vocal (and acting) performances of each cast.

I also am scheduled to review the third of the six scheduled performances, and I will take that opportunity to delve more deeply into some of the startling ideas conceived by Cura. This will include a discussion of a seductive tango dance to the music of the “Cavalleria’s” famous orchestral Intermezzo.

Unlike the highborn women (Princess Amneris in “Aida” and Duchess Federica in Verdi’s “Luisa Miller”) whom Semenchuk has played in her previous San Francisco Opera appearances, Santuzza is a peasant woman. She has been excommunicated because she was used and impregnated by a man seeking to make another woman – who was the lover he desired – jealous.

[Below: Ekaterian Semenchuk as Santuzza; edited image, based on a Cory Weaver photograph, courtesy of the San Francisco Opera.] 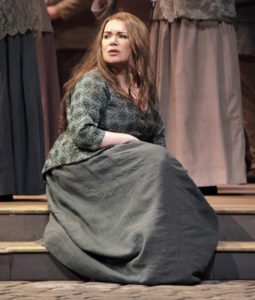 The vocal highlight of “Cavalleria Rusticana” is Santuzza’s plaintive Voi lo sapete explaining to Mamma Lucia how her son Turiddu’s reckless behavior has left her in a situation she doesn’t deserve.

Italian tenor Roberto Aronica in his role debut as Turiddu was both dramatically and vocally effective. Aronica’s lyric tenor voice was resplendent in his offstage O Lola, bianca come fior di spino that begins the opera, and  in his furious challenge Bada, Santuzza, schiavo non sono defending his infidelity.

[Below: Santuzza (Ekaterina Semenchuk, right) expresses her outrage to Lola (Laura Krumm, left) that she, a married woman, is having an affair with her man, Turiddu (Roberto Aronica, center); edited image, based on a Cory Weaver photograph, courtesy of the San Francisco Opera.] 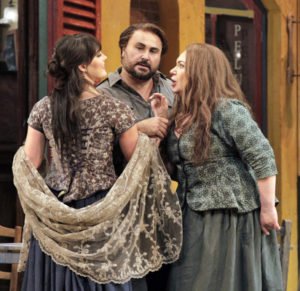 Absent from the San Francisco Opera for 23 years, Aronica portrayed a character who has won the affection of the woman he desires. In his duets with first Alfio, then Mamma Lucia in the latter’s taverns, Aronica sensitively conveyed Turiddu’s inner turmoil as he recognizes the consequences of his transgressions.

Iowa mezzo-soprano Laura Krumm was an insouciantly haughty Lola, the character’s disdain for her rival Santuzza communicated unambiguously. Although a smaller role in a relatively short opera, it is Turiddu’s pursuit of the married Lola’s affections that is the cause of all the opera’s dramatic action.

Greek baritone Dimitri Platanias (San Francisco Opera debut) has three assignments in the night’s double bill. In “Cavalleria” he sings the role of Lola’s cuckolded husband, Alfio. Platanias also sings the “Pagliacci” prologue in the guise of that opera’s composer, Leoncavallo, and then becomes the vindictive pagliaccio Tonio.

As “Cavalleria’s” Alfio, Platanias delivered what is required of the role – a strong baritone voice that, in a few phrases, makes clear the inner outrage the character feels at the insult to his honor in a community in which one’s honor is crucial to his persona.

[Below: Dimitri Platanias (front, center) as Alfio; edited image, based on a Cory Weaver photograph, courtesy of the San Francisco Opera.] 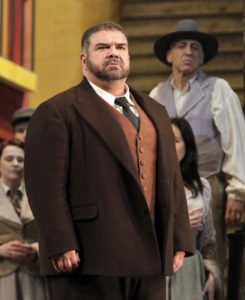 The role of Mamma Lucia was entrusted to mezzo-soprano Jill Grove, who has emerged as one of the most sought after of contemporary character actors.

[Below: Turiddu (Roberto Aronica, right) tells Mamma Lucia (Jill Groves, left, seated) what he would like her to do if something should happen to him; edited image, based on a Cory Weaver photograph, courtesy of the San Francisco Opera.] 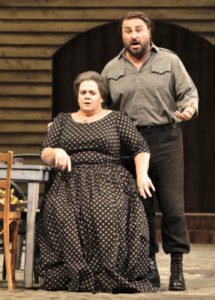 The character of Mamma Lucia and of the tavern she owns and operates have an increased importance in Cura’s staging of the double bill. Lucia’s tavern is the central meeting place of the characters in both operas and she gets a critically important line in “Pagliacci”.

Even Mamma Lucia’s waiter, who busily sets up and wipes off the tavern’s tables at the opening of “Cavalleria”, turns out to be “Pagliacci’s” Silvio (played by Texas baritone David Pershall). Silvio’s lover, “Pagliacci’s” Nedda (played by Armenian soprano Lianna Haroutounian), silently checks on Silvio’s whereabouts in “Cavalleria” as her troupe of players passes through the town. It’s not just Mamma Lucia’s son Turiddu who is killed in this double bill, it is her faithful employee Silvio as well.

Jose Cura’s unceasingly inventive production was created for Belgium’s Opéra Royal de Wallonie-Liège. I have argued in past reviews that often a non-traditional production that transfers a well-known operatic story to another time and place can bring new insights into the original work. I found Cura’s conceptualization of the double bill to be extraordinary and intensely dramatic and Cura’s warmly colored sets to be eye-catching.

Whether faithful to each detail from the original production’s staging, or adding new features, one expects any performance directed by Condemi to be stylish and faithful to the operatic composer’s intent. Particularly noteworthy in the “Cavalleria” is the effective use of the chorus as villagers moving about the village’s spaces, including the apartments and other upper floor spaces adjoining Mamma Lucia’s tavern.

I will be reporting on “Pagliacci” and on the second performance of both double bill operas in separate reviews, with more to say on Cura’s production.

I enthusiatically recommend the cast and production of San Francisco Opera’s double bill of “Cavalleria Rusticana” and “I Pagliacci”, both for the veteran opera-goer and the person new to opera.