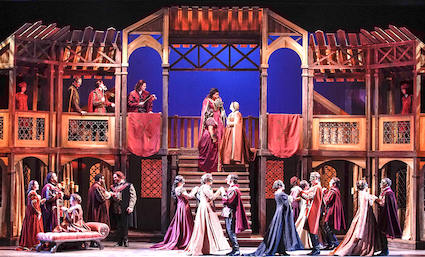 In the decades after Gounod composed the opera, Juliette’s later aria Amour ranime courage was traditionally cut. The aria was considered too heavy for the light lyric coloratura sopranos who were chosen to sing the role. In the 21st century one expects to hear the aria sung. It is not only an exciting musical passage when sung well, it is a dramatic high point of the opera. It was Brammer’s performance of Amour ranime courage that transformed her character of Juliette into a decisive heroine. In that aria, Juliette decides to follow through on Frére Laurent’s strategy to consume a potion that induces a sleep that resembles death.

[Below: Juliette (Hanna Brammer) commits herself to a potion that induces sleep resembling death; edited image, based on a Rod Millington photograph, courtesy of the Sarasota Opera.]

Brammer’s performance of the demanding aria displayed both the musical and dramatic power of the aria. A highlight of the evening, Brammer’s aria was greeted by an audience ovation.

[Below: Roméo (Andrew Surrena) stands in the garden below his lover’s balcony; edited image, based on a Rod Millington photograph, courtesy of the Sarasota Opera.]

As beautiful as the solo arias for each of the lovers are, it is the half dozen duets that Gounod (and his librettists, Jules Barbier and Michel Carre, famous for the creation of the text of Gounod’s most famous opera “Faust”) that make the score of “Roméo et Juliette” so unique.

I have written about the eroticism of the “sweet melody” infused in Gounod’s arias and duets [see Sweet Melody: Gounod’s “Faust”, “Roméo and Juliet” and the Théâtre Lyrique]. Surrena and Brammer sang each of their duets with palpable passion.

Puerto Rican bass Ricardo Lugo was a sonorous Frére Laurent, a cleric determined to use the bond between Roméo and Juliette, as a means of promoting peace between the feuding families

Lugo’s aria describing the potion which creates a sleep that resembles death is one of Gounod’s most arresting melodies, which Lugo performed beautifully.

[Below: Frére Laurent (Ricardo Lugo, center) presides over the marriage of Juliet (Hanna Brammer, left) and Roméo (Andrew Surrena, right); edited image, based on a Rod Millington photograph, courtesy of the Sarasota Opera.]

Matthew Hanscom as Mercutio and Samuel Schlievert as Tybalt

[Below: the violent feud between two Verona families continues as Mercutio of the Montagues (Matthew Hanscom, right) enters into a fatal sword fight with Tybalt of the Capulets (Samuel Schlievert, left); edited image, based on a Rod Millington photograph, courtesy of the Sarasota Opera.]

Adelmo Guidarelli as Capulet and Joseph Buetel as Paris

Connecticut baritone Adelmo Guidarelli, was the leader of the Capulet clan, dispatched Capulet’s several arias exuding the authority of a clan chieftain.

Yvonne Trobe as Stephano and Other Cast Members

New York soprano (and Sarasota Opera Studio Artist) Yvonne Trobe sang the role of the page Stephano (the only character in Gounod’s opera who does not appear in Shakespeare’s play).

In Gounod’s version, the role has dramatic significance. Stephano not only has a poetic aria (nicely performed by Trobe), but because he is a member of the Montague clan found on Capulet property his presence there leads to the swordfights in which both Mercutio and Tybalt die.

[Below: Yvonne Trobe as the page Stephano; edited image, based on a Rod Millington photograph, courtesy of the Sarasota Opera.]

The other cast members who are Sarasota Opera Studio Artists are Indiana tenor Gansom Salmon as Benvolio, Connecticut baritone Michael Gracco as Gregorio and Australian bass Christopher Nazarian as the Duke of Verona.

Maestro Anthony Barrese and the Sarasota Opera Orchestra and Chorus

[Below: Martha Collins’ staging of the Capulet’s Ball, using Peter Dean Beck’s sets; edited image, based on a Rod Millington photograph, courtesy of the Sarasota Opera.]

I enthusiastically recommended the Sarasota Opera’s cast, musical performance and production of “Romeo et Juliette”, both for the veteran opera goer and the newcomer to opera.

Regrettably, although I reviewed the sixth of nine scheduled performances, the last two scheduled p[erformances were cancelled as a result of the national state of emergency declaration created by the coronovirus pandemic.