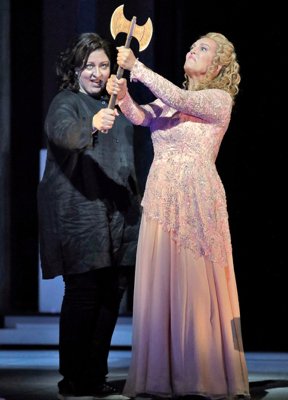 Since my junior high school years, I have been attending performances of the San Francisco Opera.

Beginning with calendar year 2006, I have given letter grades to each of San Francisco Opera’s productions during that calendar year. These are my grades for the 12th year.

Based on these criteria, these are the ratings for 2017.

For the 50th anniversary of San Francisco’s “Summer of Love”, the San Francisco Opera mounted Verdi’s “Rigoletto”, whose title role lies high in the baritone range and requires a highly dramatic style of singing.

San Francisco Opera has been one of the world opera companies that has promoted the rising career of Hawai’ian baritone Quinn Kelsey, for whom Rigoletto is a signature role. Kelsey’s masterful performance was supported by an beautifully sung Gilda by the Republic of Georgia soprano Nino Machaidze. “Rigoletto” was also the occasion for the impressive role debut as the Duke of Mantua of Kelsey’s fellow Pacific Islander, New Zealander Pene Pati.

[Below: a scene from Michael Yeargan’s production of Verdi’s “Rigoletto”; edited image, based on a Cory Weaver photograph, courtesy of the San Francisco Opera.] 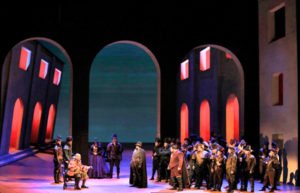 Previously, I had to travel to Europe or other U. S. cities to see Ildebrando d’Arcangelo and Erwin Schrott perform, but June’s revival of a reworked “Don Giovanni” production brought together Italian bass-baritone d’Arcangelo in the title role and Uruguayan bass-baritone Schrott as the Don’s beleaguered companion, Leporello. The two artists, who have alternated the roles at other opera companies, were masterful performers, both dramatically and vocally.

[Below: Don Giovanni (Ildebrando d’Arcangelo, on steps, left) instructs his servant Leporello (Erwin Schrott, right) to invite the Commendatore’s stone effigy (Andrea Silvestrelli, seated as a statue, above) to dinner; edited image, based on a Cory Weaver photograph, courtesy of the San Francisco Opera.] 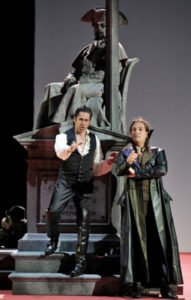 Three artists who performed their roles together in Robert Falls’ updated 2014 Lyric Opera of Chicago production, repeated them in San Francisco: Ana Maria Martinez was a tempestuous Donna Elvira,  Italian-born American bass Andrea Silvestrelli was an imposing Commendatore, and Michael Sumuel showed the comic potentialities of the role of Masetto in the hands of a talented artist.

Director Jacopo Spirei fidgeted with Gabriele Lavia’s 2011 production, including introducing some outsized projections by German videographer Tommi Brem, yet the quality of the singing and acting overwhelmed my reservations about the production’s idiosyncrasies.

For the summer’s final two performances, including a community simulcast between the War Memorial Opera House and an assembled audience at AT&T Stadium, American bass-baritone Erik Anstine took on the role of Leporello.

[Below: Rodolfo (Arturo Chacon-Cruz (left) and Marcello (Auden Iversen, right) discuss the women in their lives; edited image, based on a Cory Weaver photograph, courtesy of the San Francisco Opera.] 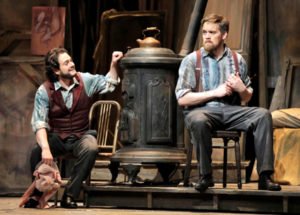 As winsome as the vocal performances, were the fascinating transformations of the Bohemian’s garret into a the Cafe Momus scene and the transformation of the Parisian barrier scene back into the garret, thanks to the skillful set designs of David Farley.

Esteemed British painter/artist David Hockney turned 80 in 2017, inviting retrospectives of his accomplishments by art museums. The San Francisco Opera celebrated his birthday by reviving his spectacular production of Puccini’s “Turandot”, with 12 performances divided between September and November/December.

I have described Hockney’s “Turandot” (with Ian Falconer’s superbly conceived costumes) as a “world treasure” – performance art that can best be enjoyed in the visual and acoustic surroundings of the War Memorial Opera House.

[Below: Prince Calaf (Brian Jagde, below) shows a remarkable facility for solving riddles proposed by the Princess Turandot (Nina Stemme above, in headdress and second from left); edited image, based on a Cory Weaver photograph, courtesy of the San Francisco Opera.]

The September performances were the occasion for the role debut as Calaf of New York spinto tenor Brian Jagde and the return of Austrian soprano Martina Serafin to the War Memorial Opera House as the Princess Turandot.  Pennsylvania soprano Toni Marie Palmertree was Liu (role debut) and Ohio bass Raymond Aceto was Timur.

San Francisco Opera audiences were introduced to the company’s imaginative co-production (with the Czech National Opera in Prague where it debuted) of Richard Strauss’ “Elektra”, created by English director Keith Warner.

The extraordinary vocal performances, led by the Elektra of New York dramatic soprano Christine Goerke and the Chrysothemis of Canadian soprano Adrianne Pieczonka, were presided over brilliantly by the debuting Hungarian Henrik Nánási, leading an augmented San Francisco Opera Orchestra (the largest in company history) 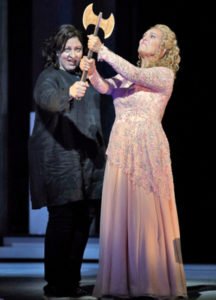 The production’s central theme – of a character who has hidden in a museum at closing time, after which the museum exhibits come alive – has been seen in American comic movies (Shawn Levy’s “Night at the Museum”) and British television (Stephen Moffatt’s “Doctor Who”). Applying the concept to the adventures of a character hidden in a museum (Elektra) to Strauss’ operatic adaptation of Sophocles’ play proved to be stunningly effective.

Of all the productions new to me that I reviewed in San Francisco or elsewhere, I found Warner’s “Elektra” to be the most engrossing.

The revival of John Copley’s magnificent “La Traviata” production was the final opera conducted by Maestro Nicola Luisotti in his position as Music Director of the San Francisco Opera. It proved to be a glorious evening musically as he led the San Francisco Opera orchestra in an affectionate performance of Verdi’s most-beloved opera. 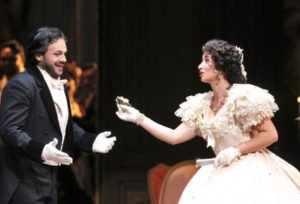 Florian’s Violetta was an elegant Violetta, whose moving death scene was especially memorable.

Superb singing by the two romantic leads was complemented by the authoritative Comte des Grieux of James Creswell, the wily Lescaut of David Pershall and the licentious Giullot of Robert Brubaker. The San Francisco Opera Orchestra was conducted by Massenet specialist Maestro Patrick Fournillier.

[Below: Manon (Ellie Dehn), distressed about the idea of entering a nunnery, is quite prepared to consider any suggested alternatives; edited image, based on a Cory Weaver photograph, courtesy of the San Francisco Opera.] 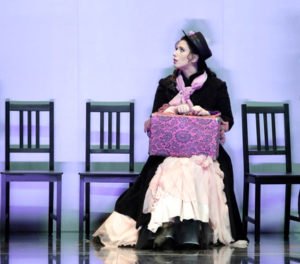 The second Boussard production to be mounted by San Francisco Opera (after Bellini’s “The Capulets and Montagues”) in 2012, it featured Boussard’s idea of mixing costumes from various time periods to highlight the universality of “Manon’s” story of a young woman who attempts to pursue both love and riches at whatever cost – the cost being her life.

Each of “Manon’s” six scenes were effectively staged, with the Saint Sulpice scene in which des Grieux’ commitment to a monastic life is undone by the unexpected appearance of Manon was particularly memorable.

Girls of the Golden West (Adams)

The legacies of these two world premieres and of San Francisco’s urban beginnings in the aftermath of 1849’s discovery of Gold, made it a natural choice for the premiere of Adams’ latest opera, “Girls of the Golden West”, to take place at the San Francisco Opera.

Adams and librettist Peter Sellars proposed a different viewpoint on California’s Gold Rush from the similarly titled works of playwright David Belasco and composer Giacomo Puccini, creating an idea-filled opera about the intertwined lives of three women and four men in a Northern Sierra mining community. 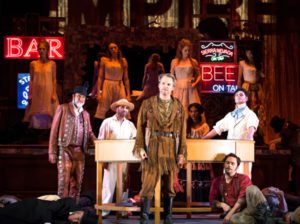 Neither critical reviewers nor audience members agreed (although many reviewers and audience members expressed strong opinions for or against the work) on how successful Adams’ and Sellars’ efforts were, but it is beyond dispute that San Francisco Opera offered the new work as dramatically and vocally effective a cast as could be imagined for its send-off.

For previous year-end summaries in this series, see: