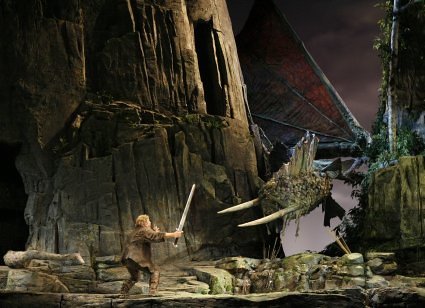 With a fairy tale storyline (which has always seemed to me to be the exposition of Prince Charming’s adventures on the way to awaken Sleeping Beauty), Siegfried overcomes the intrigues of evil dwarves, battles and kills a fierce dragon, gains the power to converse with birds,  wins a fight with the king of the gods (unbeknownst to him, his grandfather), and crosses through a massive fence of fire to find and awaken his bride.

For the opera goer, the opera abounds in delights, and each act contains a group of stories.

Performance Notes on Act I

Robert Spano, conductor of the Santa Fe Opera Orchestra, is already in place for the opening scene, which begins silently with the dwarf Mime staring in puzzlement at the shards of the sword Nothung.

Soon the deep sonorities of the brass instruments are heard, and we learn of Mime’s distress at not being able to forge together these shards, which Sieglinde, succumbing at Siegfried’s birth, had requested Mime (Dennis Petersen) to keep for the hero.

We recognize the set as a redressing of the one we saw in “Rheingold’s” second and fourth scenes, although there is a massive log straddling the grassy clearing of its former permutation and there is a forge and anvil and other primitive equipment for making steel weapons.

Since 1985 I have seen Petersen in 25 roles at San Francisco Opera, where his career was advanced by the Merola Opera program for young artists, and to which company he occasionally returns.

Now, he has emerged as one of the handful of superb character tenors, and his portrayal of the Siegfried Mime (the largest part in “Siegfried” other than the hero himself) was masterful.

Petersen now possesses a large, attractive voice that one imagines could be employed in tenor lead roles in the French and early 19th century Italian repertories, although his repertory is concentrated in a handful of juicy tenor comprimario assignments.

He also proved to be a skilled percussionist, hammering rhythmically on Mime’s anvil.

[Below: Mime (Dennis Petersen) frets over how to reforge the broken pieces of the sword Nothung; edited image, based on a Chris Bennion photograph, courtesy of the Seattle Opera.] 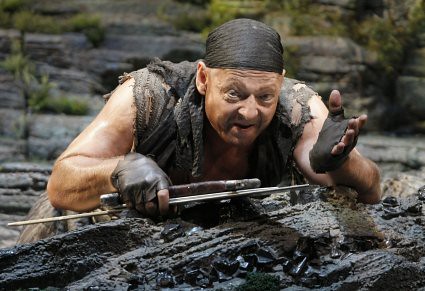 Prior to the performance Seattle Opera General Director Speight Jenkins announced that the Siegfried, Stig Andersen, had battled a viral infection all week and was performing despite some residual effects of his illness.

Such announcements gain both sympathy for a performer and engender intermission debates about whether the individual performance has been diminished by his malady. My own opinion is that, even if we were hearing a sub-optimal Andersen (I had not heard him previously) that we were hearing a very lyrical, nicely sung Siegfried.

If one examines the work’s title role, much of it is softly melodious, filled with passages in which Siegfried is talking with himself. (Remember, Siegfried never meets another person who was born human until well into “Goetterdaemmerung”.)

There are, of course, bravura passages in the first act’s scene in which he restores Nothung to its original form, and some soaring passages over full orchestra in the final duet with Bruennhilde, that lead people to classify this role as one of the heavier heldentenor roles. But this is a role that can and should be sung beautifully, and Andersen’s approach to it coincided with my tastes.

However, in a six day “Ring”, it is quite a feat to sing the Siegfried roles in “Siegfried” and “Goetterdaemmerung” with only a day’s rest in between. Anyone attempting this is engaged in a marathon activity, and it is unrealistic to expect any tenor not to pace himself.

My own view, is that even without giving him some slack for a lingering indisposition, Andersen performed the role admirably.

It’a a rough and tumble first Act. Siegfried lures a bear (performed in a realistic costume by JC Casiano) to Mime’s encampment, where it frightens Mime into hiding.

As Mime scolds Siegfried with an oft-told repetition of his years of sacrifice raising him,  Siegfried (certainly an ungrateful foster child) mouths Mime’s words insolently. On the other hand, Siegfried and Mime do seem at times (at least up to now) to have grudging affection for each other, such as when they rest their heads on each others’ shoulders.

[Below: Siegfried (Stig Andersen, left) and Mime (Dennis Petersen) with some of Mime’s equipment for making steel; edited image, based on a Chris Bennion photograph, courtesy of the Santa Fe Opera.] 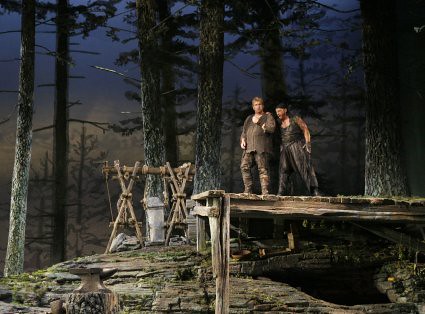 When Mime brings out Nothung’s shards, we see they are wrapped in the cloak that Siegfried’s mother Sieglinde wore in “Die Walkuere” after she and his father Siegmund escaped from Hunding’s house.

Since Siegfried has broken every sword that Mime has made for him, he is anxious for Mime to forge a new sword out of Nothung’s pieces. Then, tiring of Mime, he runs off.

Wotan appears as the Wanderer (Greer Grimsley) and he and Mime engage in a contest of spot quizzes, that Mime, to his terror, loses. (The question that defeats him, who has the power to forge the sword pieces?)

He learns that only a person without fear can forge Nothung and that he will forfeit his head to such a person. This causes Mime, after a vivid – almost hallucinatory – scene,  to accelerate his plan to introduce Siegfried to the dragon, Fafner.

In the great final scene of the first act, Siegfried figures that forging Nothung is a great “do it yourself” project. Utilizing all of Mime’s primitive technology he melts the shards, remoulds the sword, tempers the steel and proves its mettle by splitting Mime’s anvil in half with the newly reborn Nothung.

Act II’s setting is a redressing of the scene of Bruennhilde’s appearance before Siegmund to announce his death in “Walkuere” Act II Scene II. Here it becomes the Neidhoele, the cave in which Fafner guards his hoard. The act begins with Alberich staring at Fafner’s cave, as you imagine he has for the half century or so that it has taken first Siegmund and Sieglinde, and then Siegfried to grow into adulthood.

Soon Alberich is startled by an intruder. It is only the second encounter in history between the two powerful adversaries  Dark Alberich (Richard Paul Fink) and Light Alberich, aka Wotan (Greer Grimsley).

(The first encounter was the fateful one that began with the journey of Loge and Wotan to the Nibelheim in the third scene of “Rheingold”, and their “catch and release” of Alberich that ended with his curse in Rheingold’s fourth scene.)

A person who appreciates the many subtleties in Wagner’s great work will find this encounter between Fink and Grimsley, two great singing actors, to be especially rewarding.

It is followed by the light-hearted episode in which an introspective Siegfried attempts to figure out his place in the Great Chain of Being, and fashions a reed pipe to imitate the songs of the forest birds.

[Below: Siegfried (Stig Andersen) watches the forest birds; edited image, based on a Chris Bennion photograph, courtesy of the Seattle Opera.] 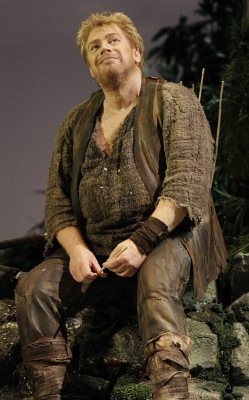 When Siegfried switches from his reed pipe to his hunting horn, he awakens the dragon, which leads to a new adventure.

[Below: Siegfried (Stig Andersen) uses the sword Nothung to slay the dragon Fafner (sung by Daniel Sumegi); edited image, based on a Chris Bennion photograph, courtesy of the Seattle Opera.] 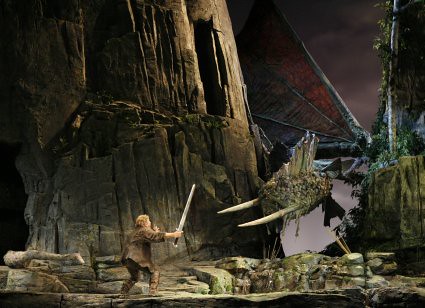 The two dwarf siblings Albertich and Mime fight among themselves as who has the right to deprive Siegfried of the Ring, tarnhelm and Rheingold. “Fight” is the operative word with Fink’s Alberich at a vantage point high on one cliff and Petersen’s Mime at a lower level, throwing rocks at one another.

[Below: Alberich (Richard Paul Fink, upper left) and his brother, Mime (Dennis Petersen, right) fight over the spoils of Siegfried’s slaying of Fafner; edited image, based on a Chris Bennion photograph, courtesy of Seattle Opera.] 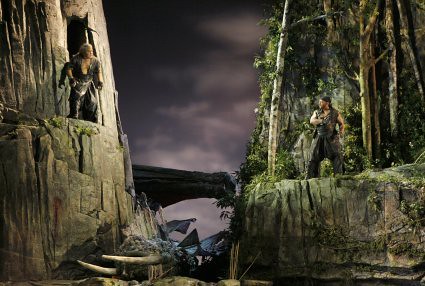 When Siegfried follows the Forest Bird’s advice and takes the Ring and Tarnhelm, Mime attempts to murder him, but is outwitted and slain. Siegfried leaves for Bruennhilde’s rock.

The first scene of Act III is a rock-face that ascends to great heights that we have not seen before in the “Ring”. Grimsley’s Wotan awakens the all-knowing goddess Erda (Maria Streijffert) from her eternal sleep to obtain further information on the coming end of the gods.

[Below: Wotan (Greer Grimsley) reunites with the goddess Erda (Maria Steijffert); edited image, based on a Chris Bennion photograph, courtesy of the Seattle Opera.] 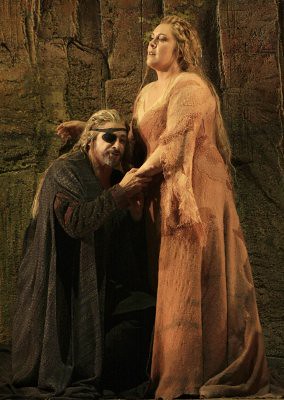 Then Andersen’s Siegfried, following the forest bird, encounters Grimsley’s Wotan, who tries to bar his way. Proving himself the hero independent of Wotan’s, he shatters Wotan’s spear, the act that is the beginning of the gods’ end.

Siegfried climbs to Bruennhilde’s rock, and, in the line that invariably brings hearty laughter, discovers, on loosening her breastplate that the sleeping warrior is no man. The music of Bruennhilde’s awakening, sung by Janice Baird, is glorious.

[Below: Bruennhilde (Janice Baird) greets the sun (and Siegmund and Sieglinde’s son) upon being awakened from her sleep; edited image, based on a Chris Bennion photograph, courtesy of the Santa Fe Opera.] 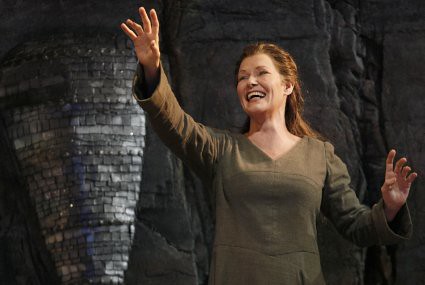 This being the fourth day of a six day “Ring”, we all will return in 43 hours for the opening chords of  “Goetterdaemmerung”.