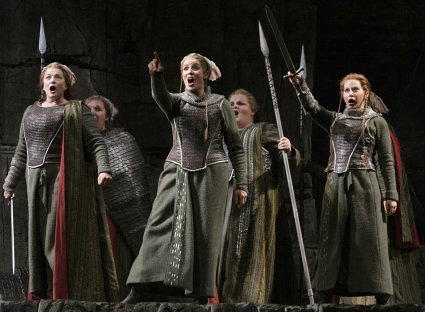 “Die Walküre”, the second opera in the Seattle production of Wagner’s “Ring of the Nibelungs” by Stephen Wadsworth and Thomas Lynch, returns with a cast that combines veterans of the work’s 2005 Seattle performances with newcomers in key roles.

Returning are Greer Grimsley as Wotan and Stephanie Blythe as his Wotan’s wife, Fricka, in towering performances that dominated the second act of Wagner’s most popular opera. Another member of the 2005 cast is the current Sieglinde, Margaret Jane Wray.

The other three cast members in the major roles are new to this production.  Stuart Skelton proved to be a heldentenor of the first rank, with a lyrical style that suggests that when 68-year old Placido Domingo finally surrenders this role (likely sometime in the next couple of decades), that there will be excellent tenors to fill the vacancy.

Siegmund’s nemesis, his brother-in-law Hunding, was played by newcomer Andrea Silvestrelli, the Fasolt of the previous night’s “Rheingold”. A young basso profondo who brings credit to his generation, Silvestrelli fought through vocal discomfort surely related to the tolls of unexpected long distance travel and emotion (he had just returned from a sudden trip to Italy for a family emergency) to produce a searing portrait of Siegmund’s dangerous foe.

The Brünnhilde was Janice Baird, attracting world attention as a diminuitive warrior with a large power voice. Early in a performance her voice has a distinctive, somewhat nasally vibrato which, as the evening progresses, ultimately emerges as a focussed, brilliant sound. Baird’s third act performance was triumphant.

Lynch created three memorable “Walküre” sets (one for Act I that returns for the first scene of Act II.)

[Below: The sets for Act I and Act II Scene I of “Die Walküre”, in which Hunding’s Hut is in a thick forest inhabited by gods and valkyries; edited image, based on a Chris Bennion photograph, courtesy of the Seattle Opera.]

A second set is for the Act II Scene II Todesverkündig, shown below; and a third, for the Valkyries’ Rock that becomes the place for the sleeping Brünnhilde to await awakening by the hero, Siegfried).

[Below: Brünnhilde (Janice Baird, above) appears to Siegmund (Stuart Skelton, left) to announce his death in the next morning’s battle, while Sieglinde (Margaret Jane Wray, bottom right) sleeps; edited image, based on a Chris Bennion photograph, courtesy of Seattle Opera.] 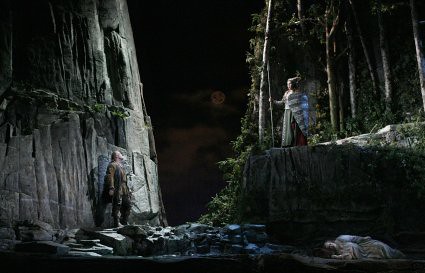 Perfomance Notes on Act I

In a performance in which Wadsworth is stage director, one expects attention to the smallest details. Since Skelton’s Siegmund speaks of being pursued through a thick forest and finding Hunding’s house, the image we see is a stage half of which is a primeval forest of massive trees and the other half is a cutaway revealing the hut’s interior.

Since rules of hospitality regulate the treatment of guests, Siegmund himself observes manners. He knocks loudly on the door, and repeats this courtesy, before finally opening it to see if the place is inhabited.

[Below: Siegmund (Stuart Skelton) finds shelter in Hunding’s house; edited image, based on a Chris Bennion photograph, courtesy of the Seattle Opera.] 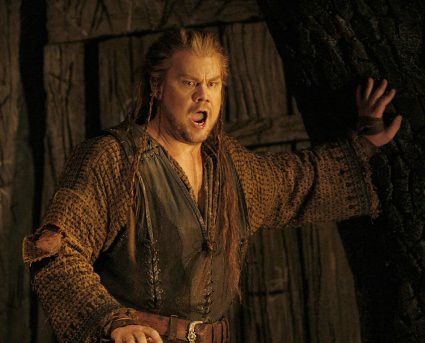 In a scene in which Hunding warns Siegmund that for one night’s hospitality that he wants his hearth to be respected, we see a burning fire in his hearth. But Hunding’s hospitality, required by strictly observed custom even to this subversive presence, is offered with the iron-fisted sincerity of a house arrest.

When Wray’s Sieglinde disappears to prepare a drugged draught for Hunding, Skelton’s Siegmund wanders around the cabin like a caged animal, checking out the small knives and other potential weapons, trying to discern what his father meant when he said that a weapon would be provided to him in his hour of need.

Soon Skelton and Wray’s characters share  each one’s earliest memories, and come to understand that they are brother and sister separated in early childhood. Then Sieglinde, who is now willing to conspire to kill her own husband Hunding, points to the sword buried in the tree.

In their ecstatic ode to the reunification of the Waelsung twins, Winterstuerme wichen dem wonnenmond, Wray and Skelton run outdoors into the forest that surrounds Hunding’s house. Skelton’s Siegmund lies on his back on a grassy path under the bough of a giant tree, with Wray’s Sieglinde lying next to him.

[Below: Margaret Jane Wray is Sieglinde; edited image, based on a Chris Bennion photograph, courtesy of the Seattle Opera.] 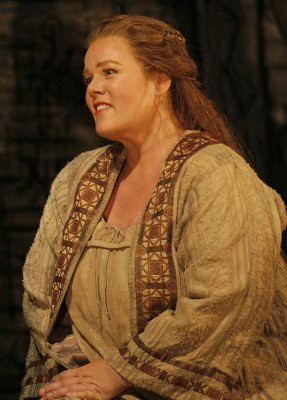 Siegmund  repeats the melody of Alberich’s renunciation of love theme from the first scene of “Das Rheingold” (as will Wotan in the third act during his farewell to Brünnhilde). As Siegmund extracts the sword Nothung, the sword motive rings out in the orchestra, and the hearth flames flare up magically.

[Below: Siegmund (Stuart Skelton) pulls the sword Nothung out of the ash tree as instructed by his sister, Sieglinde (Margaret Jane Wray); edited image, based on a Chris Bennion photograph, courtesy of the Seattle Opera.] 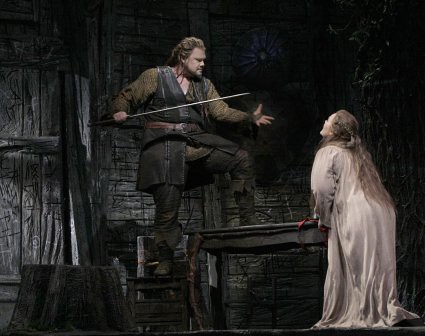 Wray’s Sieglinde grabs her cloak (which will reappear in “Siegfried”) and brushes domestic items off of Hunding’s table onto the hut’s floor. Soon they make their escape and the act ends.(Before long, they will conceive Siegfried.)

The first scene of the second act takes place in the realm of the gods. In a departure from tradition, Wadsworth and Lynch use the same set for Act I and Act II Scene I. This change (or decision not to make a change) proves meaningful.

Brünnhilde meets Wotan on the narrow path between the thick forest and Hunding’s hut (also to be used by several of her Valkyrie sisters later in the scene), then disappears from sight when Fricka arrives.

[Below:  A joyous Brünnhilde (Janice Baird) searches for Wotan in the forests next to Hunding’s hut; edited image, based on a Chris Bennion photograph, courtesy of the Seattle Opera.]

As Fricka goes through the bill of particulars against Siegmund and Sieglinde and the schemes of Wotan’s that she believes are extra-legal, they move in and out of Hunding’s house. Fricka, with symbolic attention to domestic details, gathers up the items that Sieglinde has strewn on the floor.

After an exemplary first act, heralding promising careers for Skelton and Silvestrelli and exhibiting the experienced performance of Wray, the second act encounter between Blythe and Grimsley, proved even more extraordinary.

Blythe’s rich mezzo voice and insightful acting is a wonder. Grimsley, whose voice now has grown to a robust, full sound, played off of the devastating logic of Blythe’s Fricka, that was carefully balanced with just the right touch of emotional blackmail.

Once Wotan crumbles before She Who Must Be Obeyed, Blythe’s Fricka, meaningfully touches Brünnhilde’s chin and leaves.

[Below: Fricka (Stephanie Blythe) extracts from Wotan (Greer Grimsley) his agreement to allow Hunding to win the next day’s battle with Siegmund; edited image, based on a Chris Bennion photograph, courtesy of the Seattle Opera.] 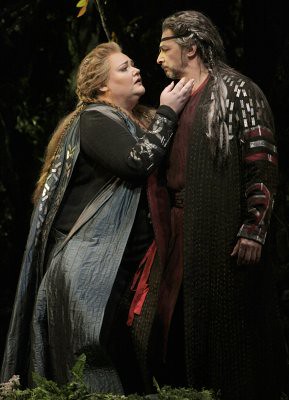 A dejected Wotan explains to Brünnhilde the reasons behind the strategies he has been forced to abandon, and revises her orders. In the act’s second scene (pictured at the top), she tries to carry out Wotan’s instructions, but is persuaded by Siegmund to change his fate.

In the ensuing fight between Skelton’s Siegmund and Silvestrelli’s Hunding, the latter comes out swinging savagely with two swords. When Brünnhilde tries to protect Siegmund, both Wotan and Fricka appear and Wotan shatters Siegmund’s sword.

In another striking Wadsworth image, after Wotan sorrowfully holds the head of the dying Siegmund and angrily strikes down Hunding (“kneel before Fricka, slave, die”), the latter staggers to Fricka, who caresses Hunding with the same sorrowful gestures as Wotan did Siegmund.

In the rousing first part of Act III, the individual valkyries matter of factly carry out their grisly duties. One carries a gunny sack of body parts, including a decapitated head, another an entire cadaver. 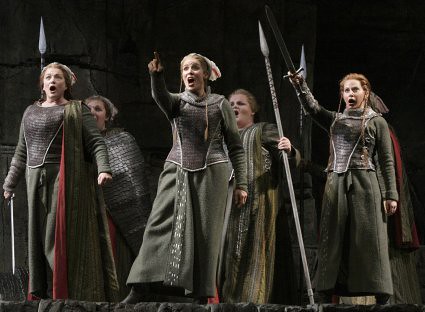 When Brünnhilde arrives with a disheveled and heartsick Sieglinde, the latter is dressed in a cloak that will itself appear in the next opera. Even though she will not receive any direct assistance  from the Valkyries, they do provide her with critical information on what path that she should follow to escape Wotan’s reach.

[Below: Sieglinde (Margaret Jane Wray), learning of the Highest Wonder in her womb, clutches the sword pieces which she will wrap in the cloak she is wearing for her unborn son; edited image, based on a Chris Bennion photograph, courtesy of the Seattle Opera.] 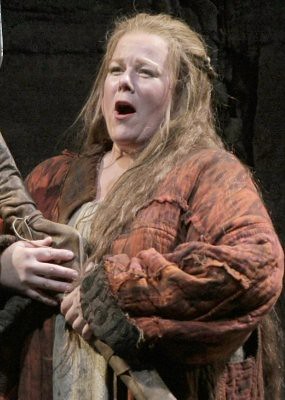 After Wotan scatters the Valkyries with the threat of anyone aiding her sharing Brünnhilde’s fate, in Wadsworth’s staging they, rather tentatively but with emotion, each give her a final embrace or other gesture of farewell.

In the conversations between Wotan and Brünnhilde, she presents a justification for her disobedience, sufficiently convincing that Wotan mitigates her punishment. In this lyrical section, one got a true measure of the focus and power of Janice Baird’s voice, now fully calibrated to its surroundings.

[Below: Wotan (Greer Grimsley) bids his daughter Brünnhilde (Janice Baird) a final farewell; edited image, based on a Chris Bennion photograph, courtesy of the Seattle Opera.] 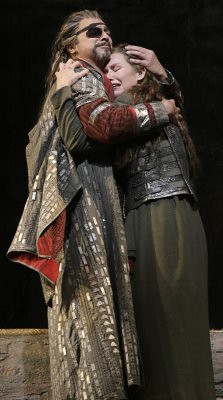 The finale of “Die Walküre” provides the opportunity for the set designer and opera houses technical staff to achieve a coup de theatre. Lynch and Wadsworth convert the valkyries’ meeting place, a pathway perched high on the rockface of a craggy cliff, into the inaccessible, flaming mountainside that can be entered only by a particular fearless hero of impressive lineage.

[Below: Wotan (Greer Grimsley) conjures up a magic power to protect the sleeping Bruennhilde from everyone but the fearless hero Siegfried; edited image, based on a Chris Bennion photograph, courtesy of the Seattle Opera.] 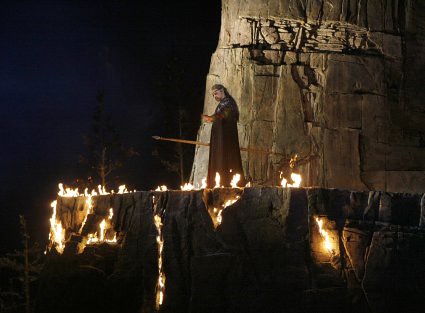 This being the second day of a six day “Ring”, we all will return in 43 and a half hours for the opening chords of  “Siegfried” in Mime’s lair.

As noted in the preceding “Rheingold” review, the physical production of the “Ring” is itself an extraordinary experience. The incredible sets are complemented by stage direction that finds meaning in every word of text.

The Seattle Opera orchestra and conductor, Robert Spano, bring credit to this summer festival. The casts are chosen with care, and exhibit a high overall standard of what may be called bel canto Wagnerian singing.

Such a combination of physical production and artistic talent make the Seattle “Walküre” and the “Ring” as a whole, a memorable experience.