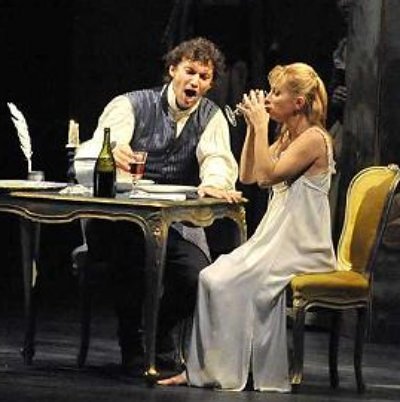 Lyric Opera’s 2008-09 season commenced with Massenet’s “Manon” in the fascinating David McVicar production, originally designed for English National Opera in London and subsequently shown in Barcelona, Auckland, Liege, Houston and Dallas. McVicar, who sticks to the story and time period of most operas he assays, famously delves into the sexual conduct at least implied by each opera’s libretto.

Massenet’s most popular opera is a tale of instantaneous sexual attraction between adolescents, acted on impulsively, with disastrous results, against a society in which family honor and social conventions are constantly countervailing forces. That much of that social order is itself decadent and corrupt is fully evident from the opera’s libretto and score, whether or not a McVicar is there to accentuate the negative.

[Below: Manon (Natalie Dessay) and Chevalier des Grieux (Jonas Kaufmann) impulsively decide to run away and live together; edited image, based on Robert Kusel photograph, courtesy of Lyric Opera of Chicago.] 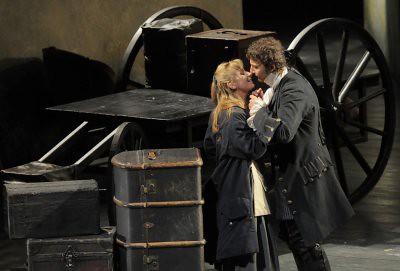 Readers of this website know of the high regard I have for the opera, for productions that display the opera’s abundant drama and passion (such productions including Vincent Paterson’s for Los Angeles Opera), and for operatic stars who excel in singing the luxuriously beautiful melodies Massenet composed and who present the drama convincingly.

Much of this review will concentrate on McVicar’s production, which emphasized a unit set, the active involvement of the ballet troupe, and, to a somewhat lesser but still impressive extent, the chorus, in stage business throughout the opera.

The unit set is basically a slice of the circumference of a circular arena, with four tiers in which spectators can stand, the action taking place on the piece of the arena’s adjoining floor. When the Lyric Opera audience enters the theater, the McVicar sets are in full display. They include small round tables and long monastery style dining tables.

Several minutes before the house lights dim and conductor Emmanuelle Villaume takes his place at the podium, characters in 18th century dress (whom we soon will realize are the 12 members of the opera ballet) begin to walk about the stage sets, peering at the audience, and constantly fanning themselves.  Occasionally one or more will walk on top of the long tables, or climb up a ladder leaning against the spectator tiers.

When Villaume does arrive and begins conducting a spirited performance, each of the 12 fall into a choreographed ballet pantomime. In a McVicar production, each ballet member and chorister is an individual character going about his or her business. The choristers who, unlike the ballet members, never move together in choreographed motions as a single unit, distribute themselves among the four arena spectator tiers.

But, beyond McVicar’s enchanting conceptualization, the quality of the singing arguably set new standards for performing Massenet. We become engrossed in the conversation of two of opera’s most notable “dirty old men” Guillot de Morfontaine (excellently sung and played by David Cangelosi) and the Marquis De Bretigny (Jake Gardner). 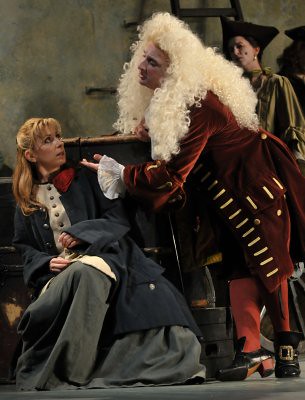 Most opera companies will cast major character actors in the Guillot and De Bretigny roles, but we know we are in a special performance when we hear the quality of singing for the smaller comprimario roles in the bustling first scene at the Amiens coach stop. Each role is played by a member of the Lyric Opera’s Ryan Opera Center Young Artists Program – the Innkeeper (Sam Handley) and the chattering trio of camp followers, Poussette (Andriana Churchman), Javotte (Kathryn Leemhuis) and Rosette (Katherine Lerner).

Christopher Feigum plays Manon’s cousin, Lescaut. His light baritone was interesting in the first scene, and proved expansive and affecting for the more substantive music Lescaut gets to sing in the opera’s later scenes.

The heart of this opera are the lovers – Manon, who appears in all six scenes and Des Grieux, who appears in five. The team of French soprano Natalie Dessay and German tenor Jonas Kaufmann raised the performance bar to a new level – unmatched by even the legendary duo of Beverly Sills and Nicolai Gedda (whom I saw together at San Francisco Opera, 1971), nor by a memorable pairing directed by John Copley with Ruth Ann Swenson and Jerry Hadley (San Francisco Opera, 1998).  Nor was this pair exceeded by the enchanting performances of Anna Netrebko and Rolando Villazon (Los Angeles Opera, 2006). For a review of the latter, see: “Thriller”: Paterson Links with Netrebko, Villazon and Domingo in L. A. “Manon” – October 5, 2006.

[Below: Manon (Natalie Dessay) and des Grieux (Jonas Kaufmann) dine at their little table in their Rue Vivienne apartment; edited image, based on Robert Kusel photograph, courtesy of Lyric Opera of Chicago.] 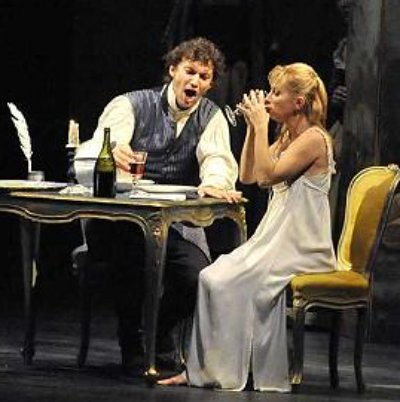 Chicago is the first city to hear Kaufmann in this role. The German tenor, now in his late 30s, possesses a lustrous voice with brilliance at the top of the tenor range, a beautiful legato, superb vocal control and the ability to move (seemingly) effortlessly between a projected pianissimo (as if he were a tenor Tebaldi) and an open voice at full volume.

[Below: Jonas Kaufmann, appearing in a concert in Montpellier, France; edited image, based on a photograph of an unidentified photographer.] 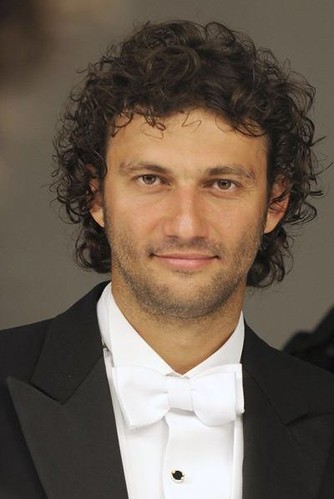 Massenet provides the music for a great tenor to show his stuff. Kaufmann sang des Grieux’ great showpieces En fermant les yeux and Ah! fuyez, douce image with such beauty, intensity of feeling, elegance of execution and technical skill that it must have occurred to others than myself that this man from Munich is defining what present day excellence in the French tenor repertory sounds like.

Kaufmann sings both the Berlioz and Gounod Fausts, and soon will have a role debut as Romeo in Gounod’s “Romeo et Juliette” at Opera National de Paris. But lest he be “pigeon-holed” simply as the emerging contemporary champion of French opera, he is simultaneously working on a rather different group of tenor roles – Walther in Wagner’s “Die Meistersinger” and the title role of Wagner’s “Parsifal” (he has already performed both roles at the Zurich Opera), as well as the title role of Wagner’s “Lohengrin”, that he is scheduled to sing at Munich’s Bayerische Staatsoper.

Natalie Dessay’s small stature and school-girl looks make her a natural for playing a giddy adolescent. But her dainty appearance belies as large a voice and as accomplished a coloratura technique as one finds in Manon or similar roles on the opera stages today. She is also a savvy actress who performs well under McVicar’s intensely detailed stage direction. For a review of her recent Lucia at San Francisco Opera, see: Dessay’s Lucia di Lammermoor Delights in San Francisco – June 29, 2008.

McVicar’s ideas constantly impress. At the Amiens coach stop, Dessay’s Manon sits on her stack of luggage.  When she catches the eye of Kaufmann’s des Grieux, he stumbles into the stack of luggage, almost knocking her off of it.

In the apartment on the Rue Vivienne, the ballet characters spy on the lovers, continuously peeping from behind furnishings, even when Manon steps out of her clothes to take her bath.  The Rue Vivienne quartet when Manon conspires with Bretigny, and Lescaut deceives des Grieux, was effectively presented.

[Below: Manon (Natalie Dessay) at the Cours La Reine with the Marquis de Bretigny (Jake Gardiner); edited image, based on Robert Kusel photograph, courtesy of Lyric Opera of Chicago.] 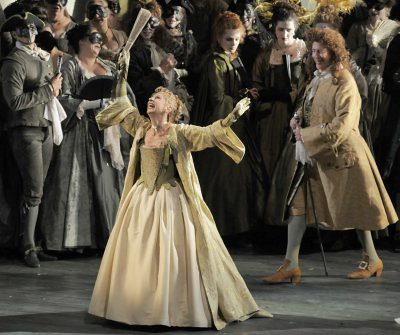 The father, Comte des Grieux, was wonderfully realized by Raymond Aceto, whose appearances in French roles are as impressive as his commanding presence of the Verdian repertory. The Comte’s relatively short appearances in his three different scenes of the opera become the center of attention whenever he is onstage.  The encounter with Dessay’s Manon was beautifully and elegantly done.

[Below: Manon (Natalie Dessay) converses with the Comte des Grieux (Raymond Aceto); edited image, based on a Dan Rest photograph, courtesy of the Lyric Opera of Chicago.] 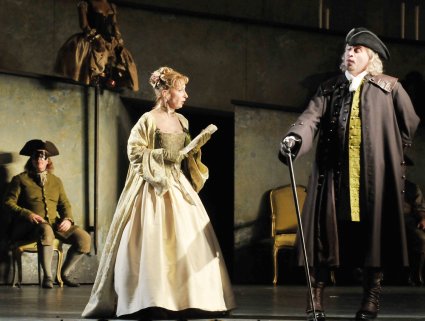 No part of a McVicar production escapes the attention of the master.  The ballet itself was a fascinating presentation, with a fantastic plot involving an archer-hunter and his prey. The irony, of course, is that this lavishly imaginative creation is barely noticed by the person for whom it was intended.

[Below: A distracted Manon (Natalie Dessay, front right) thinks about Chevalier des Grieux’ upcoming ordination into the priesthood, rather than the ballet that Guillot has spent a fortune to have performed for her; edited image, based on Robert Kusel photograph, courtesy of Lyric Opera of Chicago.] 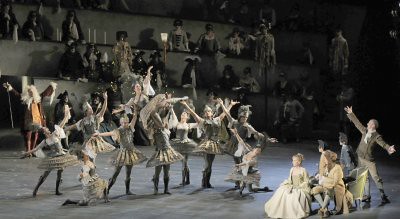 This being La Belle Epoque French opera, Massenet pulls out all the stops for an archetypal Saint Sulpice scene of religious sanctity giving way to sexual abandon.  After an affecting scene between the Comte and the Chevalier, in which the former pitches the idea of marriage and fatherhood for the Chevalier, and after Kaufmann’s Chevalier sings (Ah! fuyez) his determination to overcome his memories of Manon, she shows up to wreck his willpower.

Few modern stage directors, certainly not McVicar, can resist the juxtaposition of Des Grieux’ line Ne parle pas d’amour ici, c’est un blaspheme (It’s blasphemy to speak of love in this place – Des Grieux clasping his hands in prayer in McVicar’s concept) with the two falling entwined in each others’ arms onto the floor of the sanctuary.

The scene that takes place in the Casino at the Hotel de Transylvanie is vintage McVicar. The croupier, in a deliciously decadent portrayal by tenor Rodell Rosel, is surrounded by persons of great wealth and profound depravity. In what seems to be perfectly natural behavior, virtually all of the characters of the opera – Guillot, the Chevalier and Manon, Lescaut, Pousette, Rosette and Javotte, even the Comte des Grieux – appear to frequent this very edgy place.

Everyone is gambling, and everyone seems intoxicated.  One handsome young man loses everything except his underwear.  But he snuggles next to some men who find his nakedness interesting enough to provide him with some additional paper money to stuff in his underwear as they delicately stroke his legs. 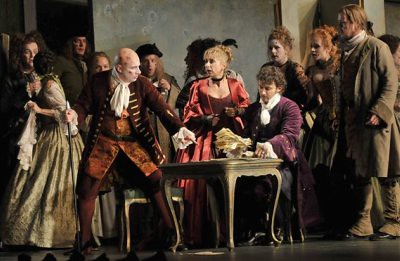 The moral of “Manon” may well be that it’s not in the interest of persons of limited means to go out of their way to cross and humiliate persons of wealth and power. The story ends badly for the lovers, especially for Manon, although the audience, particularly with this cast, can revel in the glorious music of the final scene.

Many were involved in this meritorious production, but special mention should be made of the Set and Costume Designer, Tanya McCallin, who was a true collaborator on such McVicar ideas as the voyeurism and the concept of the arena. A special note is the exclusive use of cloth for the costumes of a kind that existed in the 18th century (no synthetics). Thus, almost all of the production’s costumes are made of silk.

The McVicar production of this opera with the current cast is enthusiastically recommended.