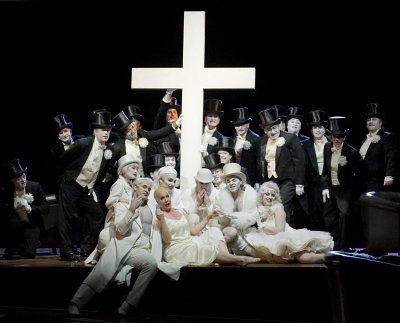 Conductor Donald Runnicles again showed that the San Francisco Opera has the ability to produce challenging repertory, leading the effort to bring the 2004 co-production (from the Salzburg and Vienna opera companies) of Korngold’s “Die Tote Stadt” to the Bay Area. It proved to be unambiguosly a personal triumph for Runnicles, who leaves his post as San Francisco Opera Musical Director at the end of the 2008-09 season.

Even though one could take issue with certain of the “Budd” images, that production may be considered conservative by Decker standards, whose work often highlights the mysterious images of dreams. “Tote Stadt”, whose long dream sequences are the core of the opera, seemed the perfect choice for seeing a Decker effort for an opera with a libretto that is consonant with the Decker style.

Decker is attracted to operatic characters crippled by obsessions, and the claustrophobic world in which Paul has lived in the years since his young wife’s death is obvious subject matter for him.

Furthermore, Korngold, who grew up in Freud’s Vienna, and was co-librettist of “Tote Stadt” with his father, was fully conscious of the current psychiatric theories about the interpretation of dreams. Sexuality, seduction and violence in Paul’s dreamworld is not there by accident, nor is the message that the activities in the dreamworld might somehow bring resolution to Paul’s psychological problems in the land of consciousness.

[Below: A grieving Paul (Torsten Kerl) with the image of his deceased wife; edited image, based on Terrence McCarthy photograph, courtesy of San Francisco Opera.] 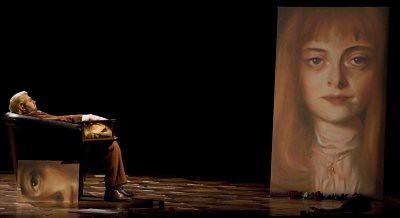 I attended the last of a six performance run. Although the opera is relatively short (two hours and 35 minutes, including its intermission, it requires a large opera orchestra – one with the skills to excel with the big German works like Wagner’s “Tristan und Isolde” or “Goetterdaemmerung” or Richard Strauss’ “Die Frau Ohne Schatten”.

The two lead parts, Paul and Marie/Marietta clearly are written for big voices – those with the weight and stamina to sing the roles of Tristan and Isolde, or Siegfried and Bruennhilde, or the Emperor and Empress. Kerl repeated his role from Salzburg and elsewhere (and from Runnicles’ CD recording of the opera.) Magee, a product of the Lyric Opera of Chicago apprentice programs, also has considerable experience with this production, having performed the role in Vienna. 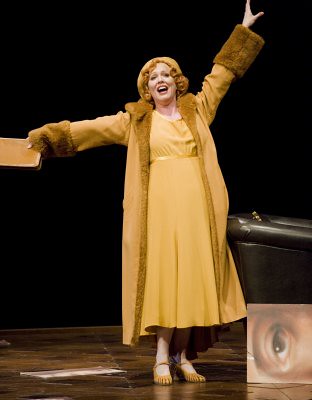 Kerl has begun to assay the heldentenor roles and Magee has added the “Frau” Kaiserin to her repertory. Both showed stamina, although both seemed challenged by the sheer size of the War Memorial Opera House, and the amount of time each had to sing over the large orchestra performing in an open pit at full volume.

The third most important role in the Decker production is the dual role of Frank, who appears in the scenes of “wakefulness” and Fritz, who sings one of the opera’s two famous arias and who appears as a harlequin in the dream sequences. One other role is basically associated with the times Paul is awake – his housekeeper Brigitta, played by Adler Fellow Katharine Tier.

Lucas Meachem demonstrated what an extraordinary opportunity the singer playing Frank/Fritz has to engage the audience, through his high spirits in the wild scenes with Marietta’s troupe, and, in a more subdued persona playing the sad clown of French folklore, Pierrot. It is as the latter that he sings the celebrated ballad Mein Sehnen, mein waehnen, displaying the lyricism, sensitivity and taste that is absolutely required for this famous piece.

[Below: Lucas Meachem appears as Frank, and, in the opera’s dream sequences also as Fritz and Pierrot the harlequin; edited image, based on Terrence McCarthy photograph, courtesy of San Francisco Opera.] 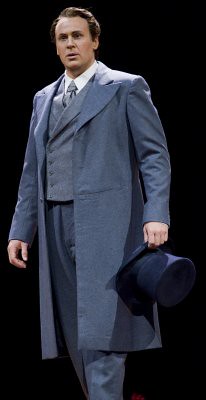 To describe the dream sequences, one must first give a sense of the setting of the “conscious” parts of the opera, which take place in a room that Paul has made into a shrine for his long-dead wife, her portrait dominating the scene. A glass box, that in the dream sequence we will associate with a saint’s reliquary, contains a plait of her hair. There is considerable writing on the wall (in German), but the most important phrase is that sung by Marie that translates “Our love was, is, and will be” catches the eye.

Decker’s sets are minimalist, consisting of a ceiling in the classical style with medallion, the outsized portrait, and an entrance to the room consiting of tall, interior wooden doors. Fresh roses are spread around the floor, and we suspect this is a ritual that has taken place many times since his wife’s death.

As Paul falls into sleep, the ceiling, which had been horizontal and at the top of the stage, now moves to a diagonal position, askew across the stage. The wooden double doors move from their upright position to a rakish tilt. Three small blue houses appear towards the middle of the stage (the back wall of the “conscious room”), rotate in fanciful patterns, then disappear.

In a stunning example of Decker’s imagination, the scrim that is the back wall of the “conscious” room gives way to a second room where everything in the foreground (Paul slumped asleep in his chair, the tilted ceiling and doors) appears in the distance as a second room. Paul’s double (played by tenor Ben Bongers) slumps in the dream room’s chair in exactly the same posture.

[Below: Torsten Kerl as Paul, dreaming about himself (his dream self played by Ben Bongers); edited image, based on Terrence McCarthy photograph, courtesy of San Francisco Opera.] 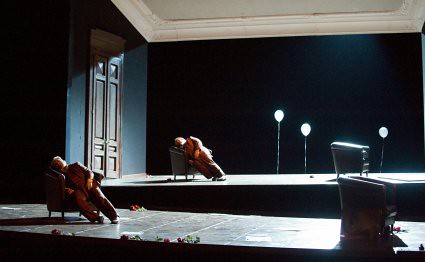 In the conscious world we learn that Marietta is a dancer who is part of a production of Meyerbeer’s “Robert le Diable”.

Her associates, whom we only hear about in the conscious world, become a troupe of performers in the dreamworld. The are Juliette (Adler Fellow Ji Young Yang), Lucienne (Adler Fellow Daniela Mack in her San Francisco Opera debut), Victorin (Alek Shrader, also an Adler fellow and debuting artist), Count Albert (Adler Fellow Andrew Bidlack) and Gaston (Bryan Ketron, a mime). 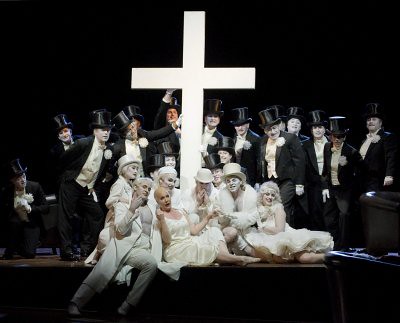 [Below: At left, Marietta (Emily Magee), mid-center Paul (Torsten Kerl), back center, a vision of an Archbishop (Lucas Meachem) during the troupe’s enactment of the resurrection of the nuns from Meyerbeer’s “Robert le Diable”; edited image, based on Terrence McCarthy photograph, courtesy of San Francisco Opera.] 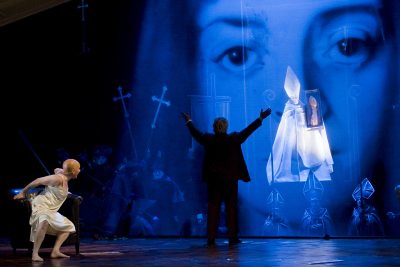 The stage director for the Decker revival in San Francisco was Meisje Barbara Hummel, who had previously directed the production in Amsterdam and Barcelona. The production designer was Wolfgang Gussman, who collaborates with Decker in most of his productions, including the “Billy Budd” seen in San Francisco in 2004.

There clearly is revived interest in the music of Erich Wolfgang Korngold, the famous Viennese child prodigy. Less than a decade after the phenomenol success of “Tote Stadt” at its simultaneous premieres (1920) in Hamburg and Cologne, Hollywood films added sound, and with sound, orchestral scores. Korngold’s cinema scores created an entirely new art form.

That distraction, the Anchluss between Austria and Hitler’s Germany, and the reality of the Holocaust, came to mean that Korngold (whose family’s Jewish heritage confirmed that Los Angeles, rather than Vienna, should be their homeland) never built upon the opera’s success.

This website has spent some time in noting the operas that survive in the repertory whose composers were 25 or under. There are presently planned reviews of three such operas in a two week period – the other two being Bizet’s “Pearl Fishers” at Lyric Opera of Chicago and Mozart’s “Idomeneo”, also at San Francisco Opera. (The most famous twenty-something and the only one that can be said to have created an “operatic warhorse” by age 25 is Gioacchino Rossini, and his operatic work under age 25 arguably has had a greater influence on the history of opera than the “25 and under” products of even Mozart, much less Bizet or Korngold – but that’s another article.)

Korngold’s fascinating opera, with its expansive melodies and synthesis of Wagnerian operatic ideas, likely never will achieve the popularity that its successful co-premieres in Hamburg and Cologne suggested it would have. It provides us with another of the great “ifs” in operatic history. What would our operatic repertory be like if Mozart and Bizet had lived and been productive up to their 80s, like Verdi? What would Korngold have achieved if he remained in opera (or returned to it after the experience of his cinematic successes)?

The Decker production and the important endorsement of Korngold’s opera by Runnicles has secured 21st century interest in Korngold, his major opera, and, increasingly, his scores for the great swashbuckling films of the 1930s (e.g., “Robin Hood” and “Sea Hawk”). San Francisco Opera and its Musical Director Donald Runnicles have advanced Korngold’s legacy.