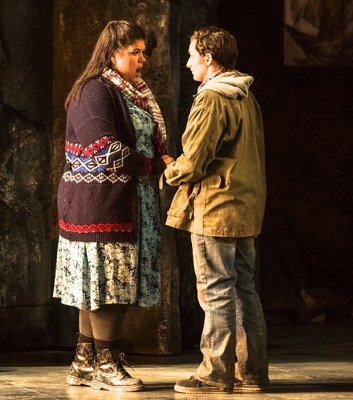 The popularity of the operas of Gaetano Donizetti and Vincenzo Bellini, both of whom tragically died young, continue to increase, and the dramatic possibilities of their operas from the early 19th century continue to be explored.

I will be reporting on productions at the Washington National Opera, The Dallas Opera, the Santa Fe Opera and the Glimmerglass Festival.

Lisette Oropesa is Marie and Lawrence Brownlee is Tonio for five of eight scheduled performances of the best-known of Donizetti’s French operas (November 12, 14, 16, 18 and 20). Andriana Churchman and Andrew Stenson sing the roles on November 13, 17 and 19. Kevin Burdette and Deborah Nansteel are, respectively, Sergeant Sulpice and the Marquise of Birkenfeld for all performances.

[Below: Lawrence Brownlee will be Tonio and Lisette Oropesa will be Marie in Donizetti’s “La Fille du Regiment”; edited image, based on a publicity photograph from kennedy-center.org.] 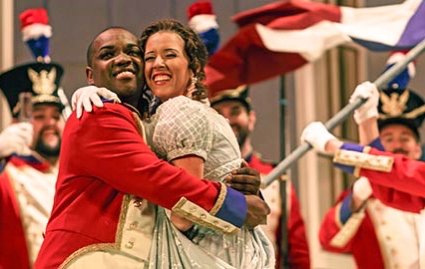 On the opening night performance (November 12), U. S. Supreme Court Justice Ruth Bader Ginsburg appears in the non-singing role of the Duchess of Krakenthorp. Cindy Gold plays Krakenthorp in the other seven performances. TImothy J. Bruno, Hunter Enoch and Randy Snight round out the cast. Robert Longbottom directs. The sets are by James Noone, the costumes by Zack Brown. Christopher Allen conducts. 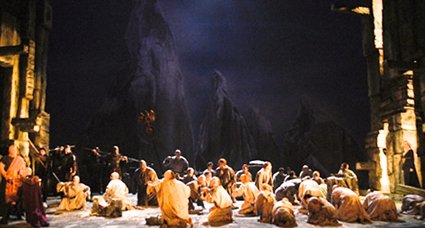 [Below: Brenda Rae as Lucia in the “mad scene” of a Ron Daniels production of Donizetti’s “Lucia di Lammermoor”; edited image, based on a Ken Howard photograph, courtesy of the Santa Fe Opera.] 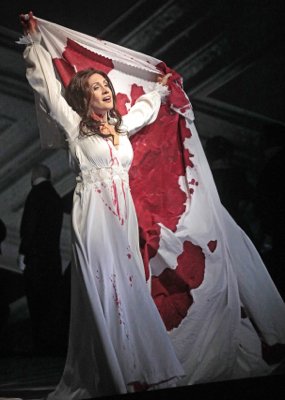 The story of Donizetti’s worthy but rarely performed “Siege of Calais” centers on acts of heroism in the Hundred Years’ War between France and England.

The historical event, Donizetti’s opera and the perceived relevance of Calais’ events to contemporary times has inspired Glimmerglass Festival’s General Director Francesca Zambello to stage a new production of the work

[Below: Eleonora (Leah Crocetto, left) and her husband Aurelio (Aleks Romano, right) discuss their fate in the Francesco Zambello production of Donizetti’s “L’Assedio di Calais [The Siege of Calais]”; edited image, based on a Karli Cadel photograph for the Glimmerglass Festival] 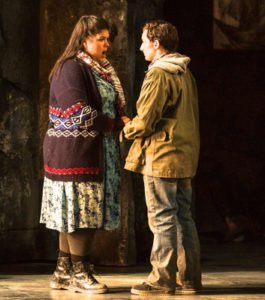 Aleksandra Romano is Aurelio, Leah Crocetto is Eleonora. The sets are by James Noone, the costumes by Jessica Jahn. Joseph Colaneri conducts.

Janacek’s “The Makropulos Case” at the San Francisco Opera. [See In Quest of Operatic Masterpieces from the German and Czech Repertories – April- November, 2016.]

Gounod’s “Faust” at the Houston Grand Opera, Tchaikovsky’s “Eugene Onegin” at The Dallas Opera, Weber’s “Der Freischütz” at the Virginia Opera and Montemezzi’s “L’Amore dei Tre Re” at the Sarasota Opera [See In Quest of Intriguing Operas, Casts and Productions – October 2016-March 2017.]

Berlioz’ “Les Troyens” at the Lyric Opera of Chicago, Janacek’s “Katya Kabanova” at the Seattle Opera, Offenbach’s “Tales of Hoffmann” at the Los Angeles Opera and Wagner’s Götterdämmerung at the Houston Grand Opera [See In Quest of Less-Often Performed Core Repertory Operas – November 2016 -May 2017.]