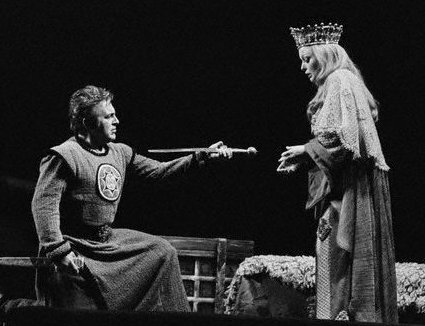 A few articles back I was trumpeting the good marksmanship of SFO boss Kurt Herbert Adler in hiring strong, interesting conductors. Surely none of his finds was better than Niksa Bareza, a Croatian with excellent credentials (Scala, Bolshoi, Vienna etc.) who studied with the great Hermann Scherchen, pillar of Westminster Records’ wonderful catalog in the busy dawn of the Vinyl era 60 years ago.

[Below: Conductor Niksa Bareza, resized image, based on a photograph from www.teatroverdi-trieste.com.] 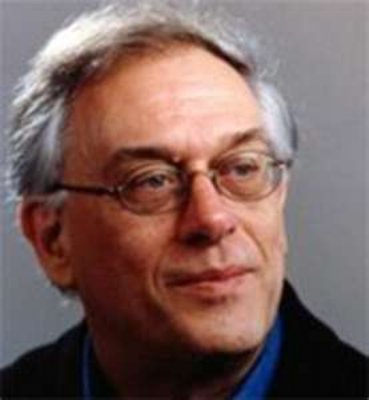 In the comfort food of Mascagni’s Cavalleria Rusticana and Leoncavallo’s I Pagliacci (we used to call these Ham and Eggs) Bareza certainly delivered the goods during his 1980 visit, we experienced from his canny baton elegant, unrushed musicmaking that breathed well and spoke to its audience. Case in point: the utter despair of the horns in the dolorosamente passage a short way into the orchestral introduction of Pagliacci.

Now those sly curlicues of the orchestra as Tonio peeks from behind the curtain a bit further on in Pagliacci were so deftly ironical I thought perhaps Bareza had added his own nuancic contribution to Leoncavallo’s score, but no, this effect is absolutely written into the printed page, especially with that long rest between the flute-oboe roulade and its answer in clarinet. But a few measures earlier Leoncavallo micro-manages to the point of writing in at least one italicized “suggestion” – a request for incalzando, heating up – which is generally ignored by conductors because the rhythmic context of the music makes it superfluous. The orchestral oven is already at 400 degrees of DRAMA.

But you want to hear about the singing. James King with his sweet and stentorian tenor was riveting as Canio, crowning his Vesti la giubba (“the show must go on”) with intermittent weeps attended by the bass viols observing his suffering from their nether sonic region.

Then in Jean-Pierre Ponnelle’s highly creative but unfussy production the curtain would remain up so the innocent orchestral intermezzo could run in counterpoint with the visual of stagehands preparing the stage for the play-within-a-play while the very unhappy Canio applies his makeup. Hearing this show again via a Time Machine broadcast tape, the combination of plaintive orchestra and determined hammering, not to speak of Canio’s audible angst made for a 10-out-of-10 work-of-art experience.

Ten years later my beloved Nello Santi had, alas, the temerity to insist on the curtain being dropped for Leoncavallo’s intermezzo and while his conducting was fine that haunting traffic jam of inner and outer worlds, suffering and duty, craziness and carpentry, went out the window.

Among the singers on the double bill there was Olivia Stapp, the Santuzza, singing with heroic bite in the frequently visited upper reaches of this part; Mikhail Svetlov, an earthy Turiddu with a precision vocal ping to his credit; and Benito di Bella (Alfio and Tonio), possessor of a ringing verismo baritone issuing from a mouth ready, it seemed, to devour ten T-bone steaks. Emily Rawlins was a sprightly Nedda who could soar in the Ballatella and do the chesty thing in her testy exchanges with the ineffectively lecherous Tonio.

Incidentally, in a recent dvd from the Zurich Opera, the conductor Stefano Ranzani steps up Leoncavallo’s adagio for Vesti la giubba to a very angry andante quasi allegretto. Interesting. And valid enough – here the soulful adagio of despair is replaced by the real-world implacability of we-must-get-on-with-it. The moral here for critics professional and armchair alike is: it’s generally very useful to ask why a conductor takes a surprising tempo!

Also in 1980 the great god Adler  emerged from his administrative command post – actually he was usually everywhere – to conduct Wagner’s Tristan und Isolde, for, I believe, the only time in his career. The naysayers will, of course, return to their eternal contempt for Adler the Maestro, but I’d risk 30 days in the clink to say that this Tristan heard blindfolded, without knowledge of who’s on the podium, would confound some of those doubters into thinking the music director of a major German house were in the saddle. A luminous, urgent interpretation KHA gave us, very melodic, with a warm string sound: I can’t remember a Tristan more oriented in the pit toward the sound of cellos.

Spas Wenkoff the Bulgarian tenor, 52 at the time, and with a law degree yet, was an extremely strong Tristan, his voice attractive, jumbo-sized and – sound the trumpets here! – steady. He was very moving too. Another credit, Ruza Baldani’s warm, cozy Brangaene. Gwyneth Jones, convincingly angry and intimate by turns as Isolde – she sounded more a real person than some of her illustrious predecessors singing originally at 78 revolutions per minute from their Olympian pedestals – was quite memorable indeed.

[Below: Tristan (Spas Wenkoff, left) offers his dagger to Queen Isolde (Gwyneth Jones); edited image, based on an Ira Nowinski photograph for the San Francisco Opera.] 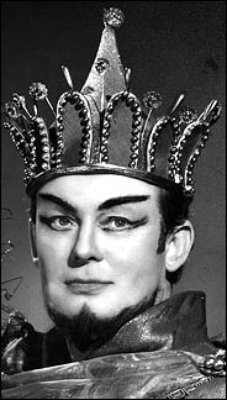 (I shook Schoeffler’s hand once, so this puts me only two shakes away from Strauss himself. But then as a cub reporter I shook Pierre Monteux’ hand and he’d met Brahms as a young man. Heavens!)

Anyway, Berislav Klobucar with a clear view of Strauss’ orchestral bulls’-eyes was back in the pit for Frau while his colleague Wolfgang Rennert presided over the company’s first Arabella, his conducting a trifle lowkey at times but he unleashed enough sweet shimmering sounds to entice us satisfactorily. Certainly he caught the exhilarating mix of despair and zaniness in the moto perpetuo third act prelude.

Kiri Te Kanawa’s 1980 Arabella remains close to ideal – as a friend recently astutely observed, this character is a tad lofty but when she’s persuasively enacted we all fall in love with her anyway. Ingvar Wixell’s Mandryka satisfied with its bluff but not too bluff machismo and it was sung in an attractive lyric baritone suggesting a Nordic, crisper version of Herbert Janssen, just about your best bet for the Evening Star aria in Tannhaeuser during what we ancients used to call the inter-war years, that’s to say the 1920s and 30s.

1980 in San Francisco also brought a memorable revival of Verdi’s Simon Boccanegra with the late Margaret Price an enchanting, velvety Amelia, Renato Bruson picking up more or less where Tito Gobbi left off in the title role, and Cesare Siepi returning with his cashmere basso, a matinee idol commodity, as Fiesco.

But the most interesting of all was the Adorno, Giorgio Casellato Lamberti, the only tenor I know whose sweet, vibrant, agreeably nasal voice could almost be mistaken for that of the great Giovanni Martinelli who was active at the Met and San Francisco in the 20s and 30s and still visible one night at the Old Met in 1963 when my wife and I spotted him standing like a proud maitre d’ in the lobby, pocket handkerchief nicely mounted in breast pocket.

Anne used to say his almost boyish voice seemed to be squeezed out of a tube of recalcitrant tooth paste, but that was part of the magic, the exquisite tension in his singing. And his attention to the text! Nobody has duplicated Martinelli’s Radames when he’s caught giving away a state secret. “Sogno,” he sings, “delirio . . . ehhh QU-esto.”

And speaking of Lamberti, jump on line and order the cd of a 1966 Rome Aida with this charmer opposite a fabulous Leontyne Price singing the most gracefully articulated O Patria Mia I recall.

Raiding my shelf of broadcast tapes from 1980 I’ve also come across Donizetti’s Don Pasquale with Geraint Evans sounding like a Welsh version of Salvatore Baccaloni, the ubiquitous and darling buffo of the Met and SFO mid-20th century. Ruth Welting was an appropriately cute and cunning Norina, David Rendall’s lyric tenor soared like a pretty bird of those pre-Florez days as Ernesto, and Timothy Nolen offered a Malatesta attractively soft-textured in sound: listening to him was rather like turning on a 75-watt light bulb when you don’t need a 100. Uwe Mund’s conducting was all right and would have scored higher points if you weren’t familiar with the sly interpretive winks of a Santi, Papi or Previtali.

The Final Adler Seasons at the San Francisco Opera with Arthur Bloomfield – The Spirit of ’78, Part 2, and also

Arthur Bloomfield – Dropping in On the Final Adler Years at the San Francisco Opera: The Spirit of ’78.

Please join Arthur Bloomfield in celebrating  the first anniversary of his new e-book, More Than The Notes, The Conducting of Toscanini, Furtwaengler, Stokowski and Friends, available at morethanthenotes dot com.