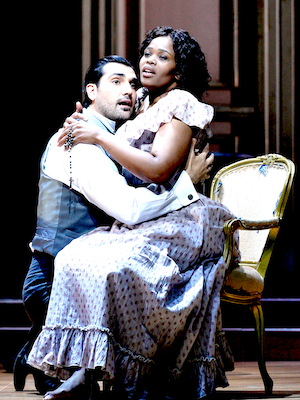 As Violetta, South African soprano Pretty Yende displayed a lustrous lyric coloratura voice with a charming vibrato, a perfect instrument for the role’s showpiece arias. She skillfully dispatched the famous double aria at the end of the first act – the introspective Ah, fors’ è lui followed by its fast-paced cabaletta, Sempre libera, the rousing anthem to a carefree life.

[iBelow: Violetta (Pretty Yende) contemplates the state of her health as she separates herself from her party guests; edited image, based on a Cory Weaver photograph, courtesy of the San Francicso Opera.] 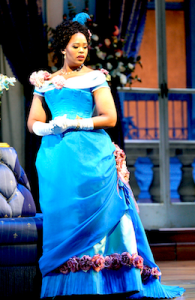 In the opera’s final scene, in which Violetta nears death from tuberculosis, Yende’s performance of the plaintive aria Addio del passato showed the vocal expressiveness and emtional power that are prerequisite to success in this role.

Throughout the evening, Yende proved to be an engaging actress, conveying the role’s varied moods of apprehensiveness, elation, love, self-sacrifice, and resignation to death that make Violetta one of opera’s premiere soprano roles.

This was my third opportunity to see Yende perform iconic operatic roles, following Los Angeles Opera appearances as Micaela [Review: Domingo at Helm for a Stellar “Carmen” – Los Angeles Opera, September 21, 2013] and Susanna [Review: New Faces for “Marriage of Figaro” – Los Angeles Opera, March 21, 2015. Her Violetta was further confirmation that Yende deserves her recognition as a member of the first rank of contemporary operatic artists.

[Below: Pretty Yende as Violetta in Flora’s salon; edited image, based on a Cory Weaver photographm courtesy of the San Francisco Opera.] 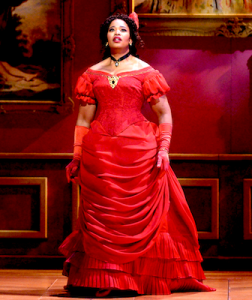 Pennsylvania lyric tenor Jonathan Tetelman made a strking impression as Alfredo in an opera house where many of great tenors of the past 90 years have performed. His voice soared in his first act duets with Yende’s Violetta – the brindisi Libiamo, libiamo and Un di, felice, eterea – two of the most beloved musical passages in Italian opera.

[Below: Alfredo (Jonathan Tetelman) pursues his love to Flora’s apartment; edited image, based on a Cory Weaver photograph, courtesy of the San Francisco Opera.] 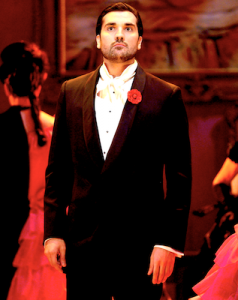 Tenors performing Alfredo have their opportunity to show off their voice in the solo arias that begin the second act. First, in De’ miei bollenti spiriti, Alfredo reflects on his love for VIoletta and their idyllic existence in her country home. Then in the following cabaletta, O mio rimorso, having learned that Violetta is selling possessions to finance their love, he determines to set things straight.

Tetelman sang these arias of contrasting emotions persuasively, displaying vocal power and emotional expressiveness. Tetelman showed more sides of Alfredo in the second half of the opera, a jealous rage directed at Violetta at Flora’s party and deep regret and atonement in Alfredo’s final duet with the dying Violetta.

[Below: Alfredo (Jonathan Tetelman, left), realizing that Violetta (Pretty Yende, right) is near death, tries to lift up her spirits; edited image based on a Cory Weaver photograph, courtesy of the San Francisco Opera.] 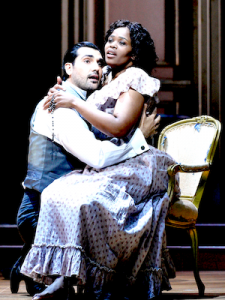 Many of the most popular Italian and French operas contain roles for the lyric tenor voice. I would be pleased to see Tetelman perform any of these lyric roles.

Italian dramatic baritone Simone Piazzola gave a sturdy performance as Alfredo’s father Giorgio, the Elder Germont. Piazzola possesses a warm, rich baritone voice he enlisted for the duet with Violetta, Pura siccome un angelo. In that duet Germont must convince Violetta to abandon Alfredo, so that Alfredo’s sister’s marriage is not destroyed by provincial prejudices against her brother’s liaison with a Parisian courtesan.

[Below: Simone Piazzola as the Elder Germont; edited image based on a Cory Weaver photograph, courtesy of the San Francisco Opera.] 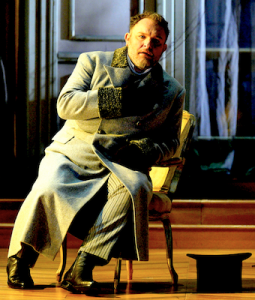 As Germont, a baritone should convincingly convey his role’s transformation from an unsympathetic position (breaking up his son’s love affair) to one that recognizes and seeks to atone for the damage he has caused to Alfredo’s and VIoletta’s lives.

Piazzola delivered Germont’s great aria Di provenza al mar, il suol and the cabaletta that follows it beautifully. Piazzola was imposing in his appearance at Flora’s party, defending Violetta against his son’s jealous rage. He proved to be a sympathetic character in the final scene at Violetta’s death bed.

[Below: the Elder Germont (Simone Piazzola, left) attempts to console his son, Alfredo (Jonathan Tetelman, right); edited image, based on a Cory Weaver photograph, courtesy of the San Francisco Opera.] 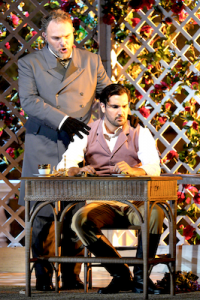 No character in “Traviata” has benefited more from the removal of the “traditional cuts” previous generations imposed upon the opera than the Elder Germont. Just a few decades past, no one would have expected the baritone to sing the cabaletta No, non udrai rimproveri – that follows Di provenza il mar – nor begin the quintet Finche avra il ciglio lagrime lo piangero at opera’s end. Piazzola’s impactful performance was further confirmation that no such cuts should be made in Verdi’s opera.

Verdi’s “Traviata” has several comprimario roles, especially in the two party scenes in, first, Violetta’s, and then her friend Flora’s, apartments. The role of Baron Douphol, Alfredo’s rival, was performed, with striking effectiveness, by Florida bass-baritone Philip Skinner.

[Below: a confrontation between Alfredo (Jonathan Tetelman, right) and Baron Douphol (Philip Skinner, left) ends in a duel challenge; edited image, based on a Cory Weaver photograph.] 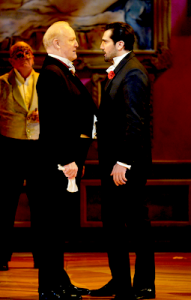 North Carolina mezzo-soprano Taylor Raven was an engaging Flora, a character who, like Violetta, was renown in Paris for parties. 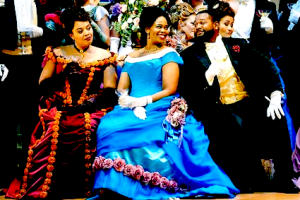 Maryland tenor Edward Graves, who is a current Adler Fellow, sang the role of the party-goer Viscount Gastone, his most visible San Francisco Opera role to date.

[Below: Adam Lau as Doctor Grenvil; edited image, based on a photograph from Facebook/Adam Lau.] 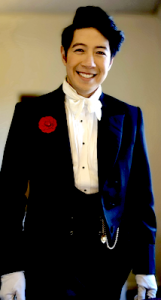 Wisconsin baritone Timothy Murray, who had created the role of Paul in a new Jake Heggie opera [World Premiere Review: Jake Heggie’s Faustian Fantasy “If I Were You” – Merola Opera Program, San Francisco, August 1, 2019] was the Marquis d’Obigny. His character’s tuxedo accessorised with a pink skirt, Murray successfully portrayed a party-goer carried away by the wild goings-on.

[Below: The Marquis d’Obigny (Timothy Murray, front right) attracts the attention of several of party’s female guests; edited image, based on a Cory Weaver photograph, courtesy of the San Francisco Opera.] 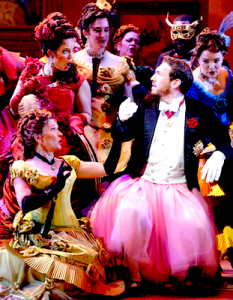 Appearing in the second and final acts, California soprano and Adler Fellow Elisa Sunshine performed the role of Annina, Violetta’s maid and confidante (rather more like an all-purpose assistant). Annina, whose presence advances the plot, and who participates in the final quintet, was sympathetically portrayed by Sunshine.

As an Adler Fellow, Sunshine has impressed in her several assignments, including the Shepherd Boy in “Tosca” and Sister Anne in “Dialogues of the Carmelites”. (She like her Adler colleague, Timothy Murray, took part in the world premiere of Heggie’s “If I Were You”.) 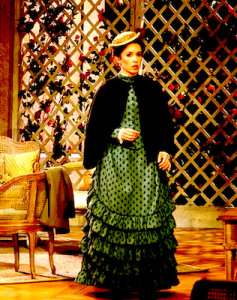 Others in the cast were Pennsylania tenor Michael Jankofsky as the servant Giuseppe, Minnesota baritone William Lee Bryan as a Messenger and California baritone Andrew Pardini as Flora’s servant.

Maestra Aun Sun Kim presided over a passionate presentation of one of the core operas of the performance repertory. The San Francisco Opera Orchestra, whose members have long experience with this work, responded magnificently. 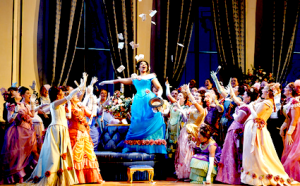 In addition to these activities, Lucey has assumed the general directorship of the San Jose Opera.

Hopkins producton designs included elegant interiors for the dwellings of Violetta and Flora. 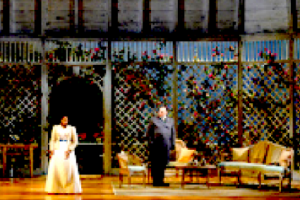 [Below: Robert Innes Hopkins’ sets for Violetta’s apartment, shown here with the dying Violetta (Pretty Yende) edited image, based on a Cory Weaver photograph, courtesy of the San Francisco Opera.] 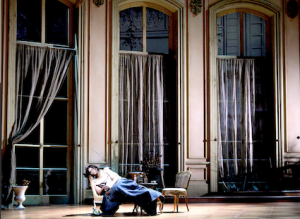 Alaska choreographer John Heginbotham guided the lively dance routines in the party scenes in VIoletta’s and Flora’s apartments. In this production, Flora’s party has replaced the traditional dances based on gypsy and bullfighting scenes with a group of prancing dancers who represent half-male, half-female characters.

Lucey’s and Hopkins’ new production of “La Traviata” boasts an outstanding vocal cast, superb orchestral playing under Maestra Kim, and praiseworthy performances by the the San Francisco Opera Chorus and Dancers. I recommend it for both the veteran opera-goer and person new to opera.