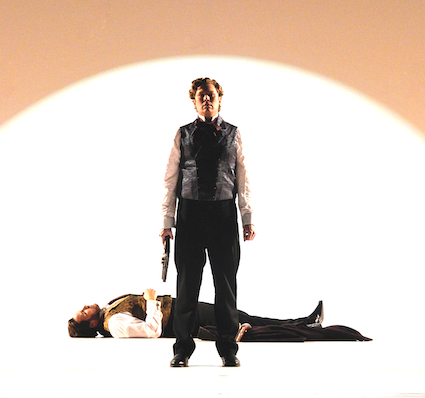 This review is an account of the fifth of seven scheduled San Francisco Opera performances of Tchaikovsky’s “Eugene Onegin”, the company enlisting the beautifully conceived Robert Carsen production of the opera.

Canadian lyric beritone Gordon Bittner proved dramatically effective in portraying a self-centered youth of the Russian elite (at opera’s end Onegin is only 26 years old). Bittner was vocally persuasive in his major aria Kogda bi zhizn domashnim krugom, in which he responds condescendently to the teen-age Tatyana’s letter of love.

Bittner was also effective in demonstrating Onegin’s pique at Lensky, with whom he has obviously argued, for bringing him to the Larina ball where he is the subject of gossip. In spite, Onegin aggressively pursues Lensky’s fiancé Olga, until the distraught Lensky challenges him to a fatal duel.

[Below: Gordon Bittner as Eugene Onegin; edited image, based on a Cory Weaver photograph, courtesy of the San Francisco Opera.] 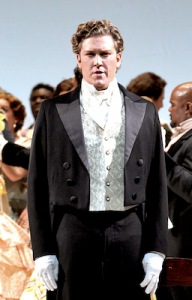 In the opera’s final scene, Bittner impressively sang Onegin’s emotional arioso Uzhel ta saja Tatyana. At opera’s end, it is Onegin who is overtaken by impulsiveness, writing his own love-letter to the girl he rejected previously (and who – now the wife of Onegin’s politically well-connected cousin – is unattainable).

Russian soprano Evgenia Muraveva beautifully portrayed the adolescent Tatyana. Her character drawn to romantic stories, Muraveva excelled in the Letter Scene – the most lushly melodious passages for soprano in Russian opera. In this enchantingly sung extended aria, Muraveva’s Tatyana composes a letter to Onegin, a man she had just met, impetuously confessing she is physically attracted to him.

[Below: Evgeniaa Muraveva as Tatyana; edited image, based on a Cory Weaver photograph, courtesy of the San Francisco Opera.] 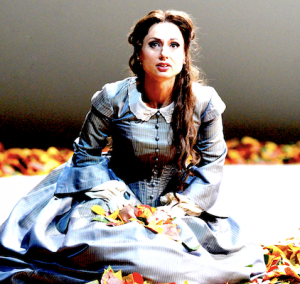 Tatyana’s subsequent moods of apprehension and regret at having sent the letter prove justified when Onegin delivers his soul-crushing response. Muraveva sympathetically portrayed the hurt Tatyana felt at Onegin’s rejection.

For her final scene, Muraveva poignantly portrays Tatyana’s response (as the Princess Gremin) to Onegin’s newly discovered love for her, listing all the reasons why her current status and power should make her wary of Onegin’s entreaties. In response to Onegin’s question “Do you only see cunning in my pleading?”, the Princess expresses that she still loves him, but they can never meet again. Muraveva proved to be wholly convincing in displaying each of the facets of Tatyana’s emotional relationship with Onegin from their first act meeting to their final moment together.

[Below: Now the Princess Gremin, Tatyana (Evgenia Muraveva) reacts to a disturbing letter; edited image, based on a Cory Weaver photograph.] 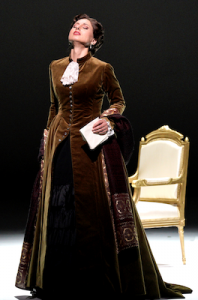 Minnesota tenor Evan LeRoy Johnson brought an elegant lyric tenor and convincing acting skills to the role of the poet Vladimir Lensky, Onegin’s ill-fated friend. Lensky is enamored of his childhood friend, Tatyana’s sister Olga, who has become his fiancé.

[Below: Evan LeRoy Johnson as Vladimir Lenin; edited image, based on a Cory Weaver photograph, courtesy of the San Francisco Opera.] 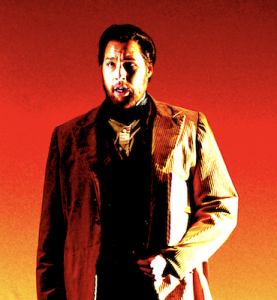 Carsen’s production makes obvious that tension grips the interactions between Onegin, Lensky, and Lensky’s fiancé Olga at the first act ball. Onegin arrives at the ball angry that Lensky has insisted they come, and that anger leads to Onegin taunting Lensky by monopolizing a series of dances with Olga. Properly acted, as happens with Bittner’s and Johnson’s performances, Lensky’s astonishing challenge of Onegin to a duel and Onegin’s acceptance seem dramatically plausible.

[Below Onegin (Gordon Bittner, left) makes it clear to Lensky (Evan LeRoy Johnson, right) that he holds Lensky responsible for his having to attend the Larina ball; edited image, based on a Cory Weaver photograph, courtesy of the San Francisco Opera.] 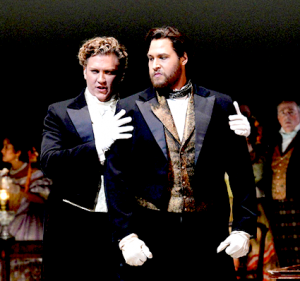 The highlight of the duel scene, musically one of Tchaikovsky’s operatic masterpieces, is Lensky’s plaintive aria Kuda, kuda v’i udalilis, the most beloved tenor aria in Russian opera. Johnson’s delivery of the iconic piece was impressively performed, receiving an ovation at aria’s end and enthusiastic applause for Johnson at the end of opera curtain calls, presaging an important career ahead for him.

As Olga, Bashkir mezzo-soprano Aigul Akhmetshina displayed a vibrant personality and an attractive voice that had the requisite vocal security for the lower part of Olga’s range.

[Below: Aigul Akhmetshina as Olga; edited image, based on a Cory Weaver photograph, courtesy of the San Francisco Opera.] 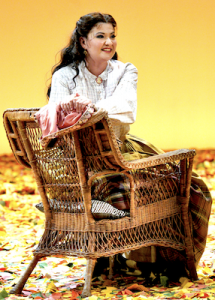 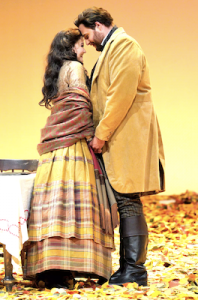 The role of Prince Gremin provided another opportunity for San Francisco Opera audience to hear Italian bass Ferruccio Furlanetto, one of the most esteemed operatic basses of the past half-century. Furlanetto performed the heartwarming aria Lyubvi fse vozrati pokorni, another of Tchaikovsky’s masterful creations, in a deeply emotional performance.

[Below: Ferruccio Furlanetto as Prince Gremin; edited image, based on a Cory Weaver photograph, courtesy of the San Francisco Opera.] 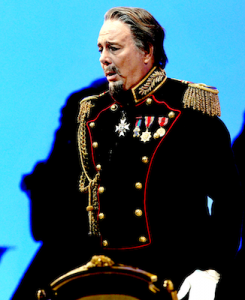 Both provided strong characterizations of rural elder women. Miller gave an affecting portrait of her youth, when, as a 13 year-old, she was marched to church for an arranged wedding, never seeing her family again. Nansteel’s Madame Larina was a nicely sung portrait of a rural woman wtih head of household respsonsibilities.

Larina’s question of Lensky after his duel challenge – Why have you done this in our house? – began one of Tchaikovsky’s most endearing ensembles, a quintet in which Nansteel’s Larina sings with Tatyana, Olga, Lensky and Onegin, one of the performance’s many highlights.

[Below: The nurse Filipyevna (Ronnita Miller, left) and Madame Larina (Deborah Nansteel, right) are engaged in preparations for dinner; edited image, based on a Cory Weaver photograph, courtesy of the San Francisco Opera.] 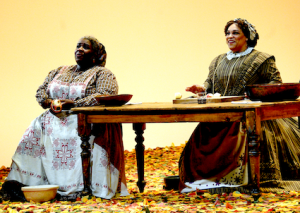 Greek Maestro Vassilis Christopoulos conducted the San Francisco Opera Orchestra in a beautifully lyrical reading of Tchaikovsky’s melodious score, to which the opera orchestra responded with distinction. The augmented Chorus, under the leadership of Pennsylvania Chorus Master John Keene, sang (and often danced) in a sprited performance.

[Maestro Vassilis Christopoulos; edited image, based on a publicity photograph from the Greek National Opera. ] 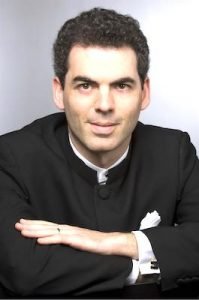 In a previous review of Canadian director Robert Carsen’s beautifully conceived production [Review: A Praiseworthy “Eugene Onegin” in Robert Carsen’s “World Treasure” Production – Houston Grand Opera, November 1, 2015], I expressed my belief that this is one of the most brilliant opera.productions currently being performed.

Levine’s sets are ultra-minimalist, consisting of a white stage floor and walls. In Act I the floor is covered by autumnal leaves (representing the rustic location of the Madame Larina’s household) that are a defining image of the production. In Acts II and III the leaves are gone, but lines of chairs form an enclosure (representing the conformity that Russian society imposes on its upper classes). That enclosure provides the space for the waltz at Madame Larina’s ball and the mazurka and polonaise dances at Prince Gremin’s festivities.

Tchaikovsky’s “Eugene Onegin” is an opera whose plot is built upon the consequences of impulsive actions of four young Russians. Different observers have discerned sub-surface motivations for the characters, especially the two men – Onegin and Lensky – inspiring opera productions that depart markedly from the what the opera’s composer and librettist have written.

I never discourage seeking new insights into familiar works, and have applauded such concepts as Jean-Claude Auvray’s [Review: A Fascinating “Eugene Onegin” at The Dallas Opera, October 30, 2016]. When controversy exists as to what an opera “means” (for example, the Munich Bayerische Staatsoper’s Krzysztof Warlikowski’s 2014 Brokeback Mountain, Wyoming resetting of “Eugene Onegin”), it is useful to have a production as a reference point that adheres to the spirit of the text as conceived by composer and librettist.

[Below: Director Robert Carsen; edited image from a youtube.com video. 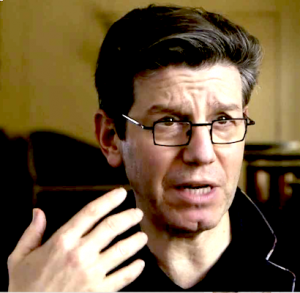 Carsen’s production – with its piles of leaves and rectangles of chair rows – adheres to the opera’s text. Every gesture of each character illuminates the plot. Inexperienced young adults can act impulsively, and sometimes those impulses – writing a letter to a near stranger revealing one’s secret thoughts or challenging a friend to a duel to the death because that friend has been deliberately inciting his jealousy – can have life-changing results.

A strking feature of Carsen’s “Onegin” is the color palette of the lighting. Originally created by French lighting designer Jean Kalman and recreated by Illinois designer Christine Binder, it tends toward sunny yellows in the leafy, early rural scenes and blues later in the opera.

The lighting design is most striking for the duel scene. The stage is first bathed in dark blue, representing the limited pre-dawn visitibity. The fatal results of Lensky’s impulsive challenge becomes evident with the rising sun.

[Below: the sun rises on the death of Lensky (Evan LeRoy Johnson, laying on ground) at the hands of Eugene Onegin (Gordon Bittner, standing); edited image, based on a Cory Weaver photograph, courtesy of the San Francisco Opera.] 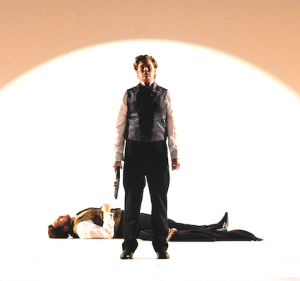 For an opera into which Tchaikovsky incorporated some of his most striking dance music, including the Larina Ball’s waltz and Gremin Ball’s mazurka and polonaise, Irish Dance Master Colm Seery oversaw the production’s brilliant and lively choreography. The four solo dancers – California’s Jamielyn Duggan, Florida’s Blanche Hampton, Indiana’s Brett Conway and Colombia’s Jekyns Pelaez – excelled in the energetic and entertaining dance routines. The chorus, as well, was fully engaged in the dancing.

The revival was entrusted to the District of Columbia Director Peter McClintock, whose early career was centered at the San Francisco Opera. Although I have seen McClintock’s work elsewhere [Review: Renée Fleming’s Reverential “Capriccio” at Lyric Opera – Chicago, October 28, 2014], McClintock’s revival of Carsen’s “Eugene Onegin” production was his first work at San Francisco Opera in the past 25 seasons.

[Below: Director Peter McClintock; edited image, based on a publicity photograph from the Lyric Opera of Chicago.] 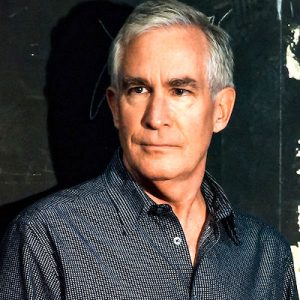 The moving San Francisco Opera performance of Carsen’s production of “Eugene Onegin” reaffirms my earlier characterization of that production as a “world treasure”.