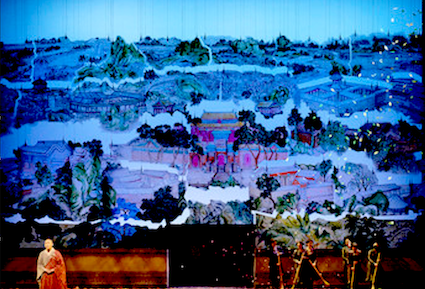 The following is a list of operas, each composed in the second or third decade of the 21st century, performances of which I am scheduled to review at the San Francisco and Santa Fe Operas.

Bright Sheng’s “The Dream of the Red Chamber”, based on episodes from the 18th century classical work of that name, returns to the San Francisco Opera a half-decade after its world premiere at the War Memorial Opera House. 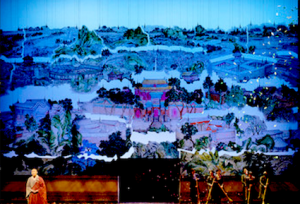 [For my performance review, see: Review: A Pleasing Revival of “Dream of the Red Chamber” at San Francisco Opera, June 14, 2022.]

[For my 2016 review of the world premiere performance, see: World Premiere Review: “The Dream of the Red Chamber” Transforms into a Fascinating Opera – San Francisco Opera, September 10, 2016.]

The Santa Fe Opera commissioned Huang Ro, whose opera “Doctor Sun-Yat Sen” had its world premiere in Santa Fe’s 2014 season, to compose the music for an operatic version of David Henry Hwang’s play M. Butterfly. Hwang will be Ro’s librettist.

[Below: Amina Edris as Cleopatra; edited image, based on a Cory Weaver photograph, courtesy of the San Francisco Opera.] 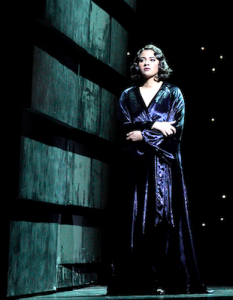 San Francisco Opera’s centennial season (2022-2023) is scheduled to open with the world premiere of a new Adams work. Unlike his four previous works that deal with mid-20th century (and late 19th century) subject matter, Adams will tackle a classical historical subject based on Shakespeare’s interpretation of the relationships between the Egyptian queen Cleopatra and the Romans Mark Antony and Julius Caesar.

The subject matter of the new Spanish language opera – “The Ultimate Dream of Frida and Diego” – is the communication on 1957’s “Day of the Dead” between the elderly artist Diego Rivera and his departed lover Frida Kahlo. Observing the strict rules that govern encounters between the living and the dead, Frida agrees to join Diego for a few hours to remember their tumultuous relationship.

The work is a co-commission with the San Diego Opera (which hosts the opera’s world premiere in October, 2022), the Fort Worth Opera and the DePauw University School of Music. 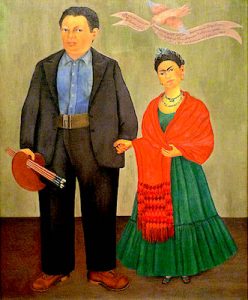 Mezzo-soprano Daniela Mack is Frida and baritone Alfredo Daza is Diego. Soprano Yaritza Véliz and counter-tenor Jacob Ingbar round out the cast. Maestro Roberto Kalb conducts. Lorena Maza directs. The sets are by Jorge Ballina, the costumes by Eloise Kazan.

This list is supplementary to previous lists in this “Quests and Anticipations” series of selected operas being performed through August, 2022:

Mozart’s and da Ponte’s “Don Giovanni” and Tchaikovsky’s and Shilovsky’s “Eugene Onegin” at the San Francisco Opera. [See In Quest of 2021 and 2022 Opera Performances in California and Arizona].