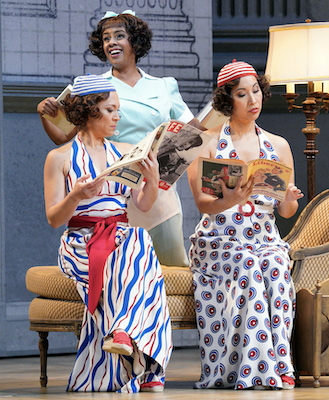 Since the year 2006, I have reviewed each of the opera productions mounted by the San Francisco Opera in the War Memorial Opera House, providing each with a letter grade.

As a consequence of the Covid-19 pandemics, all of the War Memorial Opera House performances scheduled in 2020 and in the first seven months of 2021 had to be canceled. Performances resumed in late August, 2021, under comprehensive public health protocols, that included proof of vaccination against Covid-19 and mask-wearing during the performances.

Puccini’s “Tosca” has deep historical links with the San Francisco Opera’s War Memorial Opera House, being the opera chosen for the 1932 opening of the opera house, and for its re-opening after two disasters, the 1989 Loma Prieta Earthquake and the 2020-21 Covid-19 pandemic, forced its closure over lengthy periods.

I reviewed the fifth and final performance, which included a surprise event during final curtain calls when the bass-baritone performing the Angelotti (Soloman Howard) proposed marriage to the Tosca (Ailyn Pérez) who accepted the proposal with the entire San Francisco Opera audience as witnesses. 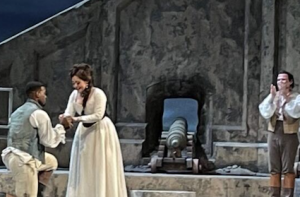 South African soprano Elza van den Heever returned to the San Francisco Opera for the first time in 14 seasons, to take on the lead role in a new Michael Ozawa production of Beethoven’s “Fidelio”. Massive sets were created for the production by Andrew Nichols to give the appearance of a contemporary prison.

[Below: the Andrew Nichols set for the prison where Fidelio (Elza van den Heever, halfway up of bottom staircase) and Marzelline (Anne-Marie Mackintosh) top level, right, in blue dress) work; edited image, based on a Cory Weaver photograph, courtesy of the San Francisco Opera.] 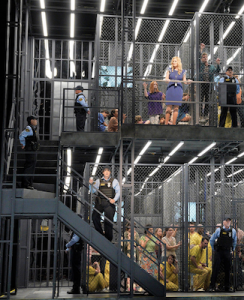 Each of the three productions (which include “Don Giovanni”, scheduled for June 2022) take place in a American Colonial-era mansion – “Figaro” around the American Revolution and “Cosi” in the 1930s when the house has been repurposed as a country club. The “Don Giovanni” will take place in the future.

[Below: Despina (Nicole Heaston, standing) is determined to prove that the sisters Dorabella (Irene Roberts, seated left) and Fiordiligi (Nicole Cabell, seated right) will succumb to the seductions of their new suitors; edited image, based on a Cory Weaver photograph, courtesy of the San Francisco Opera.] 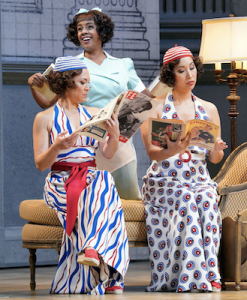 The “Cosi fan Tutte” sisters Fiordiligi and Dorabella were sung respectively by Nicole Cabell and Irene Roberts, their suitors Ferrando and Guglielmo by Ben Bliss and John Brancy. The schemers determined to unsettle the romantic relationships that existed at the opera’s beginning were Ferruccio Furlanetto’s Don Alfonso and Nicole Heaston’s Despina.

These are the operas performed (and my grades) in the San Francisco Opera seasons of calendar years 2006 through 2019: