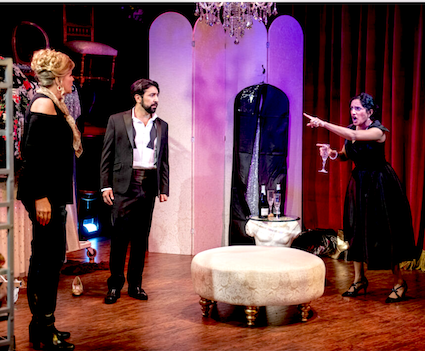 Opera San Jose filmed this performance of “Three Decembers’ on December 3, 2020. It subsequently made it available to the streaming service of the Houston Grand Opera in December 2021. This review was based on a December 2021 stream from HGO Digital, where it may be accessed through January 9, 2022.

In the decade between Jake Heggie’s successful first opera “Dead Man Walking” (2000) and “Moby Dick” (2010), Heggie’s most ambitious operatic work, is the 2008 chamber opera “Three Decembers”. The opera is based on an unpublished play “Some Christmas Letters” by Terrence McNally, a Houston Grand Opera commission. McNally was Heggie’s librettist for both “Dead Man Walking” and his 2015 opera, “Great Scott”.

“Some Christmas Letters” deals with conflicts in the interrelationships between a Broadway actress and her two adult children. McNally encouraged Heggie and librettist Gene Scheer, to augment McNally’s original play with plot points based on issues that had impacted the lives of McNally (the devastating social impact of AIDS in the 1980s) and Heggie (a father’s suicide).

Opera San Jose, the Covid-19 Pandemic and the Digital Recording of “Three Septembers”

“Three Decembers” has relatively modest requirements for an operatic performance. The opera does not present the complex challenges of traditional operatic works – large casts, choruses, full orchestras and large scenic productions – challenges that have often proved insurmountable during the Covid-19 pandemic. The opera’s cast of three singers can be accompanied by a small chamber orchestra or, as is the case at Opera San Jose, by a pair of pianos.

State and local public health authorities, reacting to the pandemic before approved anti-Covid vaccines became available, required the Opera San Jose to cancel its live operatic performances scheduled for 2020 (as happened to opera companies throughout the world).

Opera San Jose’s general director, Khari Destoor (who in the next year would become the general director of the Houston Grand Opera), planned the filming of an audience-less performance of “Three Decembers” that met public health protocols. A two-piano version of the opera was developed, eliminating the need for even a chamber orchestra. An elaborate plan that complied with all public health requirements was put into place – periodic testing, masking, sanitation protocols, social distancing, plexiglass barriers between singers, pianists and the conductor, and agreements with artists to self-isolate when not rehearsing or performing.

Two of Opera San Jose’s resident artists (soprano Maya Kherani and baritone Efrain Solis) were cast as Beatrice (Bea) and Charlie, the children of the Broadway actress Madeline. As further insurance for a successful production, to perform the role of Madeline, the services of the celebrated mezzo-soprano Susan Graham, were secured.

Opera San Jose’s version of “Three Decembers” is a one act, 90 minute opera. which was filmed December 3, 2020, for later release. The story begins in December, 1986. Broadway actress Madeline Mitchell is in Barbados. She has written a Christmas letter that proves unsettling to her young adult children, Bea and Charlie, who are both in their 20s. In a telephone call, Bea and Charlie discuss the letter’s contents and their difficult personal relationships with their often absentee actress mother. Charlie is especially resentful of his mother’s expressed attitude towards his seriously ill lover, Burt.

Ten years later (December, 1996), Bea and Charlie join their mother in New York where she has been nominated for a major award. Charlie’s lover Burt has died. Bea and Charlie are disturbed to learn that she has kept from them the fact that their father had committed suicide. Yet, Madeline had developed a better rapport with Burt before his death. Charlie and Bea begin to develop a better understanding of their mother.

Ten years after that (December, 2006), Madeline has died. Bea and Charlie sort through their memories of Madeline and achieve a better understanding of her life.

New Mexico mezzo-soprano Susan Graham played Madeline, the self-absorbed Broadway actress. Madeline believed her acting career required the delegation of childcare duties for her two children, Bea and Charlie, to a succession of nannies. She is a widow who kept her actor husband’s suicide a secret from her children until they were in their 30s.

In the opera’s first scene (December, 1986) Madeline is in the Caribbean. Her kids are having a telephone conversation critiquing passages from Madeline’s Christmas letter. Madeline surreally appears, tropical cocktail in hand, to sing I look in the Mirror, I see me, and both of you. The aria touches on each of the opera’s themes. One is the dissonance between Madeline’s success in stage roles and her difficulty with the role of “mother” to her children. Another is Madeline’s account of a trip to San Francisco with their father and her (invented) account of the circumstances of their father’s death. Importantly, the aria reveals that she was a widow when she was Charlie’s present age (25).

That brilliantly sung aria (at times a trio with Bea amd Charlie) set the tone for the entire performance. It displayed Graham’s vocal confidence and ability to convey emotional connection (even if we are never sure whether an emotional expression is from her heart and exhibits genuine connection or is yet another example of Madeline’s superb acting.)

[Below: Susan Graham as Madeline; edited image of a David Allen photograph for Opera San Jose.] 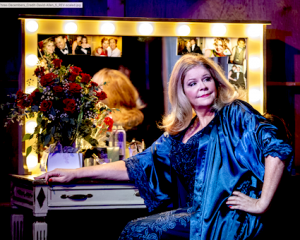 In 1996, Madeline has been nominated for an award and both children, now in their 30s, join her to celebrate. She shocks both Bea and Charlie, who only vaguely, although affectionately remember their father, by unintentionally revealing that she has lied to them about their father’s death when they were young. Instead of his being killed in an automobile accident as she had always told them, he had committed suicide.

Despite Bea and Charlie being disturbed by that revelation, their reconciliation with Madeline begins in this second December. Graham’s Madeline sings a lullaby to Charlie, with the revealing phrase Seeing you through his eyes made me realize that I missed not knowing you as they mourn the death of Charlie’s lover Burt.

In 2006, Madeline has died in her sleep, and Bea and Charlie are together remembering her. Madeline’s spirit joins them in that final December as Bea and Charlie quote Madeline’s conclusion of the Christmas letter she wrote just before her death: “All in all, isn’t life simply grand? I’m so awfully glad I showed up for it.”

[Below: the spirit of Madeline (Susan Graham), stands at the footlights for her final curtain; edited image, based on a David Allen photograph, from Opera San Jose.] 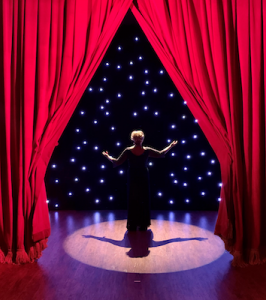 Susan Graham’s artistic association with Heggie and McNally was established two decades prior when she created the role of Sister Helen Prejean in the world premiere of Heggie’s first opera “Dead Man Walking” (whose librettist was McNally). Herself a performer with an extraordinary range, dramatically and vocally, Graham has triumphed in roles as diverse as Gluck’s Iphigénie [Review: Night at the Museum – “Iphigénie en Tauride” Springs to Life at San Francisco Opera – June 17, 2007] and Berlioz’ Queen Dido [Review: Susan Graham, Hymel, Antonacci in a Magnificent “The Trojans” from Sir David McVicar – San Francisco Opera, June 7, 2015 and Review: A World Class Cast for Berlioz’ “Les Troyens” – Lyric Opera, Chicago, November 13, 2016]

California baritone Efrain Solis brought his impressive skill as a singing actor to the role of Charlie. His lyric baritone was vocally secure, expressive, and technically proficient in the rapid-fire conversations that Charlie conducts with his sister reacting to their mother’s 1986 Christmas letter.

Brother and sister each have their personal problems, but Charlie is clearly the most distressed. His lover Burt has contracted HIV and Charlie will be his caregiver over the long years of his eventually fatal illness. Burt has been Charlie’s source of emotional comfort over the past few years. Charlie has received no such comfort from his mother, who has yet to come to terms with her son’s sexuality. She angers Charlie, when, in her letter, she misnames his partner Burt as Curt.

This leads to an extended musical passage, which Solis performed beautifully, affectingly conveying the emotional toll to himself that his mother’s indifference to Burt, whom she has met many times, has caused.

[Below: Efrain Solis as Charlie; edited image, based on a David Allen photograph, from Opera San Jose.] 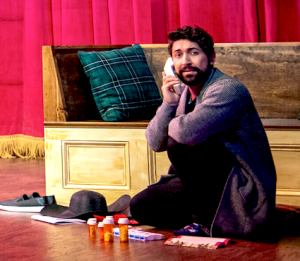 Soprano Maya Kherani gave a bravura performance in the role of Bea. Much of her role lies high in the soprano range, which Kherani sang beautifully with superb vocal control.

[Below: Maya Kherani as Bea, reading passages from a Christmas letter; edited image, based on a David Allen photograph, from Opera San Jose.] 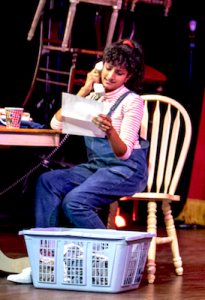 Bea wrestles with alcoholism, whose dependency is deepened by her knowledge of her husband’s infidelities. Kherani’s Bea marvels at the diamond ring her husband Sid has bought her. Unfaithful husbands bring unexpected gifts, she sings.

[Below: Bea (Maya Kherani, right) accuses her mother Madeline (Susan Graham, left) of misleading her brother Charlie (Efrain Solis, center) and herself about their father’s death; edited image, based on a David Allen photograph, from the Opera San Jose.] 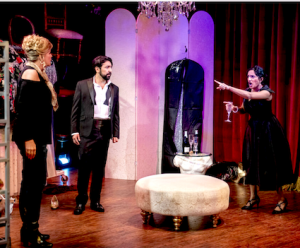 In December 2006, at the opera’s conclusion, Bea and Charlie are reunited after they learn of their mother having died in her sleep after finishing her 2006 Christmas letter. Kherani’s Bea leads the final eulogy; “It wasn’t easy being her children” as she opines that Madeline loved the theater more than she and Charlie. “Not more, just differently” replies Solis’ Charlie. Kherani’s Bea continues “[The theater] gave her a wonderful life. It was her religion. Pretending was her way of forgetting. And perhaps her only way of feeling deeply.” Then Kherani’s eulogy is joined by Solis and Graham (the latter as Madeline’s spirit), in an emotionally sung, satisfying trio.

[Below: Bea (Maya Kherani, left) and Charlie (Efrain Solis, right) toast the memory of their mother; edited image, based on a David Allen photograph, from Opera San Jose.] 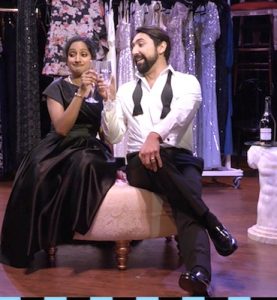 Adhering strictly to the Covid-19 safety protocols during both rehearsals, conductor pianists were separated from each other and the three singers by plexiglass shields, yet the resulting performance was musically and dramatically satisfying. 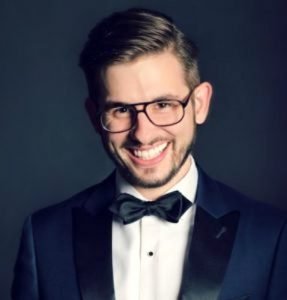 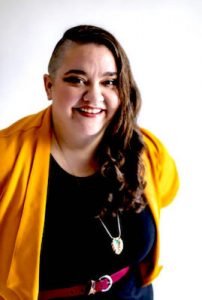 The minimalist sets by designer Steven C. Kemp proved adequate to convey spatial distance for the 1986 scene, in which the three characters are within a few feet of each other, yet we can believe Madeline is in the Caribbean, while Bea is in Hartford and Charlie in San Francisco speaking to each other on the telephone.

[Below: in Tara Branham’s 1986 staging, Madeline (Susan Graham, center) is enjoying a cocktail in the Caribbean, while her children Bea (Maya Kherani left) and Charlie (Efrain Solis right) discuss her correspondence by telephone; edited image, based on a David Allen photograph for the Opera San Jose] 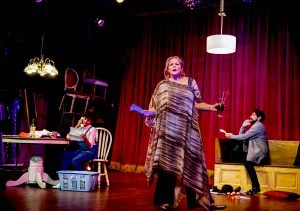 The Opera San Jose production was dedicated to the memory of Terrence McNally, who, ironically, had died of Covid-19 complications ten months earlier. 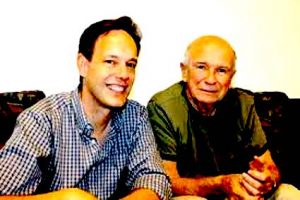 [Below: Jake Heggie with librettist Gene Scheer; edited image, based on a publicity photograph.] 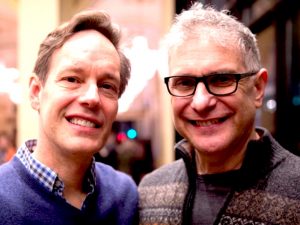 I recommend the Opera San Jose’s digital performance of Heggie’s and Scheer’s sophisticated chamber opera “Three Decembers” both to the veteran opera goer and the person new to opera. For information on the HGO Digital Stream, available through January 9, 2022, contact the Houston Grand Opera.