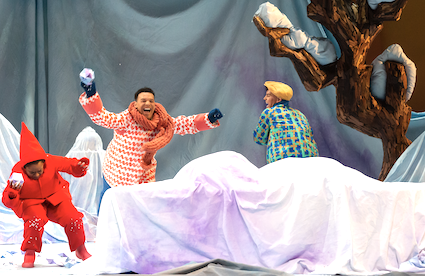 What if you were to take an Caldecott Medal-winning children’s book – one beloved for the past six decades, with the distinction of being the book title that has been checked out of the New York Public Library more than any other in the library’s history – and transform it into an opera? The book, Ezra Jack Keats’ “The Snowy Day” was the source of such an operatic adaptation, commissioned by the Houston Grand Opera.

Although Keats’ “The Snowy Day” is a story about a boy’s first experiences in snow, the book’s characters are sympathetic representations of black children and adults, who were conspicuously absent from most children’s literature up until its 1963 publication.

The opera’s world premere was originally to take place at the Houston Grand Opera in late 2020. Like other operatic projects throughout the world, the Covid-19 pandemic required a year’s postponement of the world premiere. Once the world premiere was rescheduled, the decision was made to stream the performance and make it available without charge to the world audience.

Keats’ sparsely worded book is intended as a bedtime story. To adapt it to an hour long opera, the Houston Grand Opera, in cooperation with the Ezra Jack Keats Foundation, secured the services of children’s author Andrea Davis Pinkney as librettist. Her collaboration with compoer Joel Thompson proved felicitous. The book only briefly references a child experiencing the snow, his mother, some boys throwing snowballs and an unidentified friend. Pinkney’s libretto and Thompson’s music fleshed out vivid portraits of the boy Peter’s family and of the kids in his neighborhood. In their adaptation, they created an affecting portrait of a racially-mixed neighborhood.

Performing the role of the young boy Peter was Maryland soprano Raven McMillon. Dressed in the iconic hooded red snowsuit illustrated in the book, McMillon was convincing and affecting as a child experiencing snow for the first time.

[Below: Raven McMillon as Peter; edited image of a Lynn Lane photograph, courtesy of the Houston Grand Opera.] 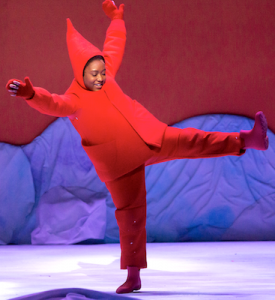 McMillon, in her second year as an HGO Studio Artist, brought a bright-sounding, youthful voice to the role.

Soprano Karen Black was dramatically persuasive and vocally outstanding in the role of Peter’s Mama. Slack’s expressive voice of power was enlisted for a heartfelt performance of Mama’s soliloquy, sung in Peter’s bedroom after he left for his venture alone in the snow.

[Below: Karen Slack (left) as Mama and Nicholas Newton (right) as Daddy; edited image of a Lynn Lane photograph, courtesy of the Houston Grand Opera.] 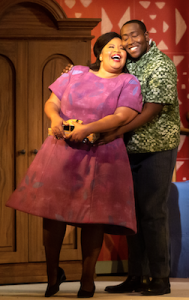 California bass-baritone Nicholas Newton, possessing the cast’s lowest voice, brought vocal authority to the role of Peter’s Daddy. In a cast most of whose members doubled assignments, he also performed the role of the boy, Tim, in an endearing performance.

Cuban-American soprano Elena Villalón, an HGO studio artist, sang the role of Amy, a girl who befriends Peter, in a convincing, beautifully sung, portrayal. “Try being a girl in a world of boys” she complains to Peter, as she builds a snowman for his amusement and shares her sled with him for a downhill ride. She and Peter do snow angels during an appealing orchestral interlude.

Villalón’s character, who does not appear in the book, is one of the charming additions to the opera.

[Below: Amy (Elena Villalón) stands next to the snowman she built; edited image of a Lynn Lane photograph, courtesy of the Houston Grand Opera.] 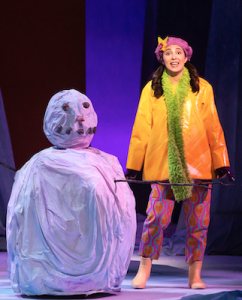 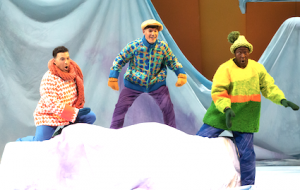 [Below: Maestro Patrick Summers; edited image of a publicity photograph.] 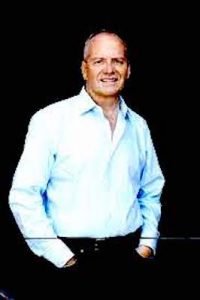 Joel Thompson’s chorale “The Seven Last Words of the Unarmed” is a powerful work of social protest, demonstrating Thompson’s compositional skill in vocal music. For the gentler themes of “The Snowy Day” Thompson created an orchestral palette that is both melodic and evocative of such winter phenomena as dripping icewater and descending snowflakes. 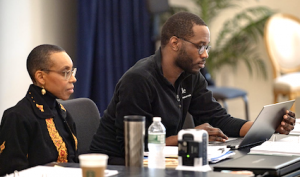 Pinkney’s children’s books, both fiction and nonfiction, include age-appropriate biographical works on black community leaders and on the social protests that resulted in the landmark civil rights acts of the 1960s. For the opera, she successfully created a libretto that maintained the charm and innocence of Keats’ story, augmenting it with an inspirational characterization of Peter and his family residing in a mixed neighborhood.

Ben Seadia’s scenes moved seamlessly between Peter getting dressed with his parents’ help, to kids at play under the (distant) supervision of parents, to Peter’s return indoors.

[Below: Director Omer Ben Seadia; edited image of a publicity photograph for omerbenseadia.com.] 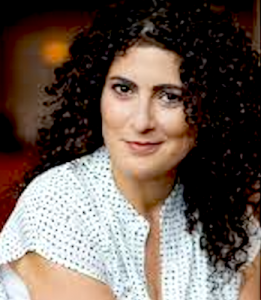 The scenic designs, which were informed by the book’s original illustrations, were the creation of theater desisgner Amy Rubin.

[Below: set designer Amy Rubin; edited image, based on a publicity photograph, courtesy of the Houston Grand Opera.] 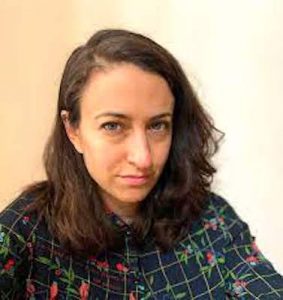 [Below: Peter (Raven McMillon) is back in his bedroom after his adventures in the snow; edited image of a Lynn Lane photograph, courtesy of the Houston Grand Opera.] 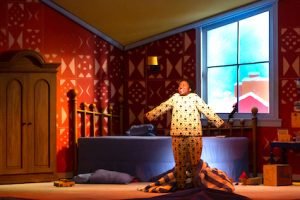 The après-snow scenes included a bubble-bath, which Peter enjoys after his exhausting day of downhill sledding, snowball throwing and making snow angels. 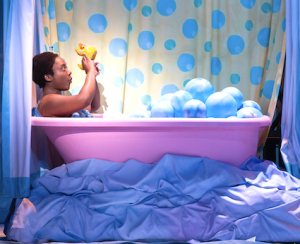 [Below: Peter (Raven McMillon, left) finds himself in proximity to the snowball fight between Billy (Cory McGee, center) and Jasper (Andres Acosta, right); edited image of a Lynn Lane photograph, courtesy of the Houston Grand Opera.] 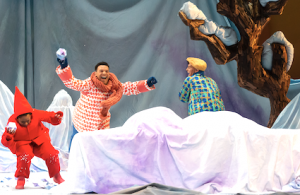 [Below: Costume designer Jessica Jahn; edited image, based on a publicity photograph, courtesy of the Houston Grand Opera.] 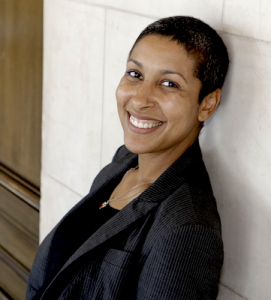 I recommend the Houston Grand Opera world premiere production of Thompson’s and Pinkney’s “The Snowy Day” to all audiences of all ages, whether veteran opera goers or persons new to opera; and consider it to be a child-friendly opera, especially appropriate for the winter holiday season.

For more information on the HGO Digital series of streamed performances, including “The Snowy Day”, see www.houstongrandopera.org.