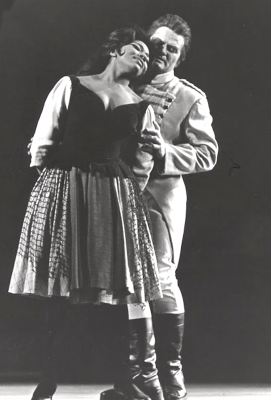 Note from William: This post continues my series of observances of historic performances that I attended at San Francisco Opera during the general directorship of Kurt Herbert Adler. This is the fourteenth of fourteen such observances of performances from the company’s 1966 Fall season.

As a teenager who became interested in (and then obsessed by) grand opera performance, I had managed to see many of the mid-20th century’s most famous opera stars in live performance. These performances took place during my high school years in San Diego during the San Francisco Opera’s post-season tours of Southern California.

When it came tim eto applying to college, my first choice was San Francisco State University, in which I enrolled in 1961. Concurrent with my freshman year enrollment, I became a San Francisco Opera subscriber, going from Orchestra Central Aisle Row V, then to Row J, then Row E. A close friend’s subscription seat was in Row A on the Sunday matinee, and the person sitting next to her sold several of her tickets to me, including the final Sunday matinee. That matinee was Bizet’s “Carmen”.

This was my first opportunity to see American mezzo-soprano Grace Bumbry in performance. Her San Francisco debut as Carmen had taken place 12 days earlier. This performance was her fourth in those 12 days.

Bumbry, 29 years old at the time of 1966 performance was, for me, a revelatory Carmen. Bumbry’s Carmen exuded her power through a vibrant sexuality, which she knows how to use to manipulate men. Every phrase Bumbry sang, every gesture she made, defined the exotic, intoxicating woman with the power to destroy a man’s career and end his life, as she did with Don Jose.

Below: Grace Bumbry as Carmen: edited image based on a Carolyn Mason Jones photograph, courtesy of the San Francisco Opera Archives.] 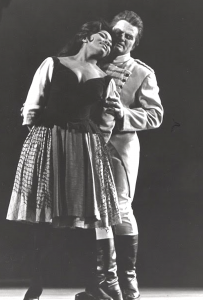 Bumbry was my second Carmen. The first was Regina Resnik in a performance two years earlier [Historical Performances: Bizet’s “Carmen” with Regina Resnik, Jon Vickers and Pilar Lorengar – San Francisco Opera, October 9, 1964]. Resnik, 42 at the time of that 1964, performance, brought carefully honed acting skills to the part, but hers, compared to Bumbry’s had more of matronly feel.

In the post hyperlinked above I wrote “Resnik brought a maturity to Carmen that was at odds with the character’s youthful spontaneity. Carmen exudes power in her own way, but a convincing Amneris, Fricka, Croissy or Pikovaia Dama [four other roles I saw Resnik perform] is not necessarily a convincing Carmen.”

Bumbry returned to San Francisco Opera the next year for the 1967 season, and then 20 years later for the role of Abigaille in Verdi’s “Nabucco”. I was able to see her operatic performances elsewhere. 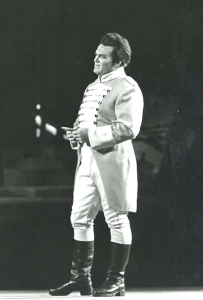 Between Vickers’ 1959 San Francisco Opera debut and this final Don Jose of 1966, Vickers had sung a total of 28 performaness at the War Memorial Opera House (not including three sstudent matinees unavailable to the general public). The 28 performances were of eight roles performed in one or more of the 1959, 1960, 1963, 1964 and 1966 seasons.

[Below: Carmen (Grace Bumbry, left) welcomes the attention bestowed on her by Don Jose (Jon Vickers, right); edited image, based on a Carolyn Mason Jones photograph, courtesy of the San Francisco Opera Archives.]

The seven performances I had attended constituted 25% of all his regular performance appearances at the War Memorial Opera House up to that time. I had seen him perform all of the roles he had performed at that opera house, except for Canio and Radames.

Vickers returned in 1969 for two performances as Radames, replacing an indisposed artist. (His 1969 appearances included a single Radames in Sacramento, which I was able to attend.) Then in 1976 he returned for his final season with the San Francisco Opera, for 11 performances divided between Siegmund and the title role of Britten’s “Peter Grimes”. Ultimately I saw all of Vickers’ San Francisco Opera roles, except for Canio.

The Micaela was 32 year old soprano Carol Todd, who throughout the 1960s had moved from comprimario to principal roles, first in the Spring Opera Theater, later in the main season. In 1964’s “Carmen” she sang the comprimaria role of Carmen’s companion, Frasquita (along with Janis Martin, who was on the verge of a major international career) as Carmen’s other companion, Marcedes.) 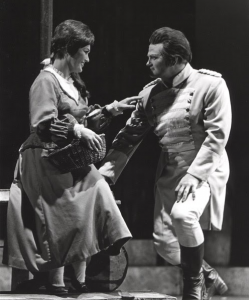 Although Todd’s voice was not particularly well-suited for the large War Memorial Opera House, she had a pleasant vibtato and an appealing stage presence. I thought her Micaela with Bumbry and Vickers was the best of her performances that I attended throughout the decade.

[Below: Frank Guarrera as Escamillo; edited image, based on a Carolyn Mason Jones photograph, courtesy of the San Francisco Opera Archives.] 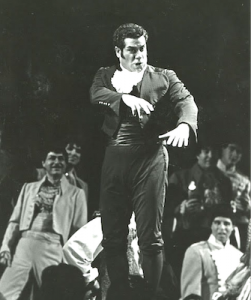 Escamillo was obviously a role with which Guarrera’s career was associated and he performed the part competently. It lacked, however, a bit of the sparkle of the briliiant performances by Bumbry and Vickers.

Others in the cast were Federico Davia as Zuniga, Adib Fazah was Morales. Frasquita and Mercedes were respectively Catherine Christensen and Dorothy Krebill. The bandits El Dancaire and El Remendado were respetively Howard Fried and Raymond Manton.

Maestro Jean Périsson conducted. Louis Erlo was stage director. The sets were those from 1959 designed by Howard Bay. Zachary Solov was choreographer.