Note from William: My most recent review of an operatic performance was that of the Sarasota Opera’s production of Catalani’s “La Wally” on March 7, 2020. Although I was scheduled to review subsequent operatic performances in Chicago, San Francisco, the Glimmerglass Festival, Los Angeles, Dallas and Houston, every one of these performances was canceled as opera companies responded to the worldwide Covid-19 pandemic.

Live opera performances in many venues are resuming, including at the Santa Fe and San Francisco Operas, notably with many accommodations designed to protect the health of artists and audiences. The following is a list of opera productions in Santa Fe and San Francisco in the months of July and August, 2021 that I am scheduled to attend and review: 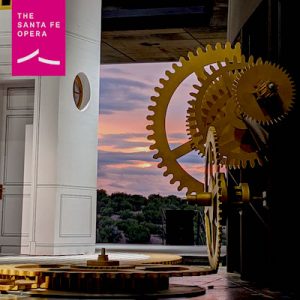 Countertenor Anthony Roth Costanzo, in his Santa Fe Opera debut, creates the role of Dionysius in the world premiere of John Corigliano’s second opera. “Lord of Cries” premieres two decades after Corigiliano’s “Ghosts of Versailles”), with a libretto by his husband (and fellow opera composer) Mark Adamo.

The plot of the opera, “Lord of Cries”, is ultimately based on Euripides’ “The Bacchae”, with a twist. It moves the action to the end of the 19th century London and also includes characters and plot elements from Bram Stoker’s 1897 novel “Dracula”.

[Below: Countertenor Anthony Roth Costanzo; edited image, based on a publicity photograph.] ] 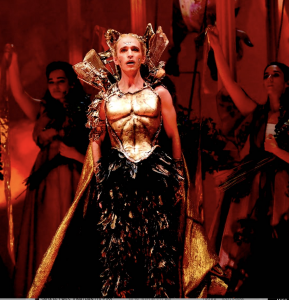 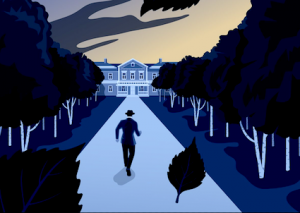 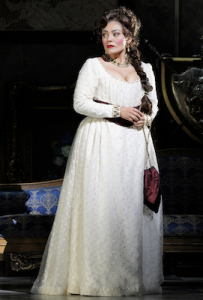 Baritone Alfred Walker is Baron Scarpia. Bass-baritone Soloman Howard is Cesare Angelotti. Also performing are Dale Travis as the Sacristan, Joel Sorensen as Spoletta, Timothy Murray as Sciarrone, Stefan Egerstrom as the Jailer and Elisa Sunshine as the Shepherd Boy.

This website’s “Quests and Anticipations” feature, previewing operatic performances I was scheduled to attend and review, was established in 2007. Over the course of the next 13 years, the feature linked the previews to each of my subsequent reviews. After my March 2020 “La Wally” review, every performance I was scheduled to review was canceled.

Rodgers’ and Hammestein’s “The Sound of Music” at the Glimmerglass Festival. [SeeIn Quest of Intriguing Opera Productions – September, 2019-August, 2020]

Verdi’s “Ernani” at the San Francisco Opera. [See In Quest of Donizetti and Early Verdi (January-July, 2020)]

Beethoven’s “Fidelio” at the San Francisco Opera, Wagner’s “Tannhäuser” at the Los Angeles Opera, Wagner’s “Lohengrin” at The Dallas Opera and Wagner’s “Parsifal” at the Houston Grand Opera. [See In Quest of German Operatic Masterpieces – September 2020 to January, 2021.]

[As of July 2021, the previously canceled San Francisco Opera “Fidelio” and Los Angeles Opera “Tannhäuser” have been rescheduled, with some cast changes, for Fall, 2021 and will be included in the next “Quests and Anticipations” feature.]