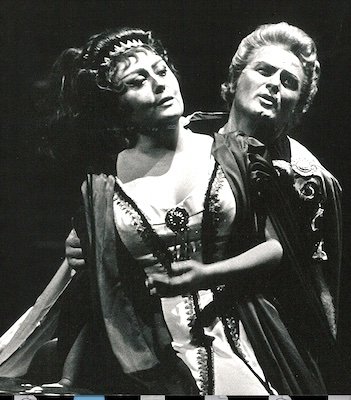 Note from William: This post continues my series of observances of historic performances that I attended at San Francisco Opera during the general directorship woof Kurt Herbert Adler. This is the tenth of fourteen such observances of performances from the company’s 1966 Fall season.

One week after my second “Rigoletto” performance of San Francisco Opera’s 1966 Fall season, I was to experience the third and final performance of the Amercan professional stage premiere production of Hector Berlioz’ masterpiece “Les Troyens”. The first performance, which took place eight nights prior, was the occasion of the San Francisco Opera debuts of two emoinent French artists: Maestro Jean Périsson and director Louis Erlo.

Régine Crespin as Cassandra and Dido

The performance was my first opportunity to see and hear French soprano Régine Crespin perform in a French opera at the War Memorial Opera House. Her association with “Les Troyens” began with an important Opéra National de Paris production five years earlier.

In San Francisco, Crespin assayed dual roles – the Trojan Cassandra and the Carthagenian Dido. The San Francisco production cut most of the Trojan scenes that begin the opera, eliminating all of the characters, principal and minor, except for Cassandra and the chorus. The result was that Crespin dominated the two scenes of the evening’s first act. Crespin’s elegant and authoritative presentation of Cassandra’s ominous warnings about the duplicity of the enemy Greek forces, had a stunning effect.

The production’s second and third acts, set in Queen Dido’s realm, detail the love affair between Dido and the Trojan hero Aeneas. Although the role of Dido is usually sung by a mezzo-soprano, Crespin performed it splendidy.

I had reported previously on Crespin’s persuasive performance of a Wagnerian role [Historical Performances: Jess Thomas’ “Tannhäuser” with Régine Crespin, Janis Martin and Thomas Stewart – San Francisco Opera, October 22, 1966]. As her Aeneas, Crespin was joined by Canadian tenor Jon Vickers, who was also associated with heroic Wagnerian roles. Berlioz’ rich sonorities of Dido and Aeneas love duets were especially memorable in the voices of two of the greatest mid-20th century opera stars.

[Below: Dido (Régine Crespin) and Aeneas (Jon Vickers, right) sing of their love; edited image, based on a Carolyn Mason Jones photograph, courtesy of the San Francisco Opera.]

Jon Vickers, whom I had seen perform the role of Don Carlo earlier in the season [Historical Performances – Vickers is “Don Carlo” with Watson, Horne, Glossop and Tozzi – San Francisco Opera, October 1, 1966], was a consummate Aeneas, masterful in a Franch heroic tenor role, that he would later perform at the New York Metropolitan Opera.

The comprimario roles in the Carthagenian scenes were assigned to principal singers from the San Francisco Opera 1966 season roster of artists. Anna, the companion of Crespin’s Queen Didon was sung by Czech soprano Sona Cervena. New York tenor David Thaw was Iopas, Australian bass-baritone Clifford Grant was both Pantheus and the Ghost of Chorenus. Michigan bass Ara Berberian was Narbal. Dorothy Krebill was Ascanius. The Ghosts of Priam, Cassandre and Hector were respectively David Giosso, Carol Kirkpatrick and Adib Fazah.

Périsson’s San Francisco Opera debut season was to be the first of eight seasons (the first seven consecutively) during which he would helm nine different operas, seven from the French repertory.

The production was conceived by French director Louis Erlo, in the first of three seasons producing French works for the San Francisco Opera. At the end of the three-year period, Erlo assumed the directorship of the Opéra de Lyon and after that of the Aix-en-Provence Festival.

Erlo’s production included sets by designer Wolfram Skalicki, with choreography by Zachary Solov in his final season with the company. The costumes, borrowed from the Opéra de Paris, were those of its 1961 production.

The production’s extensive cuts, predictably, were controversial. It raised a fundamental question: In presenting Berlioz’ basically unknown five hours long opera, was it better to whet the audience’s appetite by mounting three hours of it, or, should one have refused to produce the opera until such a time when audiences appeared to be ready for Berlioz’ entire work?

[Below: a view from the War Memorial Opera Hedouse’s Grand Tier of Wolfram Skalicki sets for “Les Troyens”; edited image, based on a Carolyn Mason Jones photograph, courtesy of the San Francisco Opera.

The ‘three-hour version” was well recieved by San Francisco Opera audiences, so much so that it was revived two seasons later. It certainly aroused interest in the parts of the opera that had been cut.

The very first opera I ever attended was a San Francisco Opera performance of Gounod’s “Faust”, conducted by French Maestro Jean Morel, who, I came to know, taught Maestro James Conlon how to conduct French opera [See An Interview with Conductor James Conlon, Part 2.] The next time I was to see a San Francisco Opera production of an opera sung in French was my 30th opera performance, Saint-Saëns’ “Samson et Dalila”, eight years later. Then, the next season, I saw my first “Carmen”, followed in the 1965 season with Debussy’s “Pelléas and Mélisande”

In a previous post, I had made reference to a comment by Swedish soprano BIrgit Nilsson characterizing the San Francisco Opera as a “German house” and suggested that, whether or not Nilsson’s description was true, that one could not – at that time – describe the San Francisco Opera as a “French house”. However, noting that General Director Kurt Herbert Adler had secured the pre-eminent French conductors Georges Prêtre for 1963’s “Samson” and Jean Martinon for 1965’s “Pelléas”, it appeared evident that whenever Adler scheduled French works, he desired an appropriate conductor for the venture.

French opera had been performed in the company’s budget-priced Spring Opera Theater [SPOT], which had scheduled one or two performances a season that included the two most famous operas of both Gounod and Bizet and the single most performed opera of Massenet and of Offenbach. However the 1966 SPOT season included a French opera rarity [see Historical Performances: Thomas’ “Mignon” starring Vanni, Porretta – San Francisco Spring Opera, May 24, 1966].

In retrospect, it appears that Adler was preparing San Francisco Opera audiences for major forays into the French repertory, with the securing of the services of Périsson and Erlo as a first step. Over the ensuing 15 seasons with Adler at the helm, the San Francisco Opera explored exotic regions of the French repertory – including operas of Auber and Meyerbeer, and such less performed (and even forgotten) works of Massenet as “Esclarmonde”, “Thaïs” and “Le Cid”.