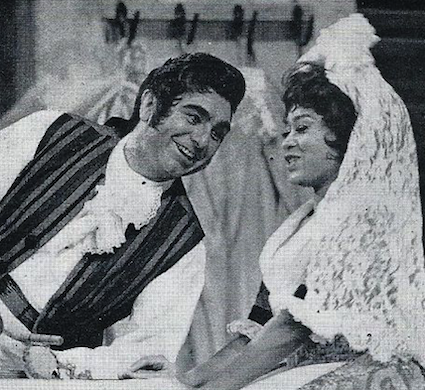 Note from William: This post continues my series of observances of historic performances that I attended at San Francisco Opera during the general directorship of Kurt Herbert Adler. This is the eighth of fourteen such observances of performances from the company’s 1966 Fall season.

Six days after a memorable Sunday matinee performance of Mussorgsky’s “Boris Godunov”, I returned Saturday evening to the War Memorial Opera House for the opening performance of Mozart’s “The Marriage of Figaro”.

Two years following their first San Francisco Opera pairing as Figaro and Susanna [Historical Performances: “Nozze di Figaro” with Geraint Evans, Grist, Lorengar, Waechter – San Francisco Opera, October 3, 1964] Welsh bass-baritone Geraint Evans and New York soprano Reri Grist were reunited with a different cast. It was the sixth role that I had seen Evans portray at the San Francisco Opera in what was to be a long association with the company (1959 through 1983).

Evans was a larger than life presence on stage. He was a master of the soliloquy aria, such as “Nozze’s” Se vuol ballare – where, as the center of attention, his every pause, gesture and expression complemented his peerless musical phrasing of the aria’s lyrics.

Grist throughout the mid-1970s was a dominant presence in the leggiero and lyric coloratura soprano roles at San Francisco Opera. Earlier in the Fall 1966 season she was Verdi’s Gilda [Historical Performances – “Rigoletto” “Nozze” with Glossop, Kraus, Grist and Kreppel – San Francisco Opera, October 16, 1966]. In both roles Grist confirmed herself as an audience favorite (and mine as well).

Evans was reunited with Scottish baritone Thomas Stewart, with whom he appeared in Verdi’s “Falstaff” in two previous San Francisco seasons [[Historical Performances: “Falstaff” with Evans, Simionato, Stewart – San Francisco Opera, October 11, 1962.] Again, the pair performed the roles of a sexual predator and an adversary determined not be cuckolded, although Stewart’s Almaviva and Evans’ Figaro were the reverse of the adversarial positions adopted situations experienced by Evans’ Falstaff and Stewart’s Ford.

Stewart’s mastery of diverse operatic styles was impressive. In the previous season I had already experienced two of his performances of the most iconic Mozart role [See Historical Performances: “Don Giovanni” with Leontyne Price’s Donna Anna – San Francisco Opera, October 15, 1965].

[Below Baritone Thomas Stewart; edited image of a publicity photograph.]

Stewart’s Countess was New York soprano Claire Watson. Although I had not found her to be a convincing Elisabetta [Historical Performances – Vickers is “Don Carlo” with Watson, Horne, Glossop and Tozzi – San Francisco Opera, October 1, 1966], she proved to be a worthy Countess Almaviva, demonstrating both flawless Mozart technique and the combinaton of dignity, mischievousness and vulnerability that I associate with the character.

[Below: Claire Watson was the Countess Almaviva; edited image of a publicity photograph.]

In luxury casting, the roles of the “villains”, Don Bartolo and Marcellina, who unexpectedly turn out to be Figaro’s parents, were sung by Chilean heldentenor turned baritone and Czech mezzo-soprano Sona Cervena.

Vinay’s post-tenor career exploration of the baritone repertory produced six roles in two consecutive seasons at the San Francisco Opera, both dramatic and comic – including both Mozart’s and Rossini’s Don Bartolo [see Historical Performances: “Barber of Seville” with Meneguzzer, Blankenburg, Vinay, Trama – San Francisco Opera, October 24, 1965.] Many of Vinay’s repertorial choices were famously to be followed during the post-tenor baritone career of Placido Domingo).were

Mozart and librettist da Ponte wrote very funny material for their characters, that never fail to brings laughs even in the present time over two and a quarter centuries later. Cervena, whose Prince Orlofsky had shown how effective she was in bringing a comic character to life [Historical Performances: “Die Fledermaus” with Mary Costa, Richard Lewis, Reri Grist – San Francisco Opera, September 18, 1965] was hilarious as Marcellina.

Soprano Lee Venora sang the musico role of the lovesick lad Cherubino. Like Reri Grist (who created the role of Consuelo in Bernstein’s “West Side Story”), Venora had a career that included both operatic and Broadway stage experience (as did several other artists chosen by General Director Kurt Herbert Adler to perform at the War Memorial.) She proved to be a solid choice as Cherubino, her brilliantly sung Voi, che sapete evidence of her command of the role.

[Below: Lee Venora was Cherubino; edited image, based on a publicity photograph.]

Over seven seasons, soprano Gwen Curatilo performed a variety of small roles, including the many servants. pages and flower maidens required by the operatic repertory. Her standout role was Barbarina, the the girl that captured girl-crazy Cherubino’s heart.

Barbarina is a short role as well, but a very desirable one for a young soprano, because Mozart has invested the role with one of his affecting melodies, L’ho perduta, me meschina. Curatilo performed it during all three of Curatilo’s seven seasons at the War Memorial Opera House when “Nozze” was performed.

[Below: Gwen Curatilo was Barbarina; edited image, based on a publicity photograph.]

Others in the cast included David Thaw as Don Basilio, David Giosso as Antonio, Raymond Manton as Don Curzio and Catherine Christensen and Carol Kirkpatrick as the peasant girls.