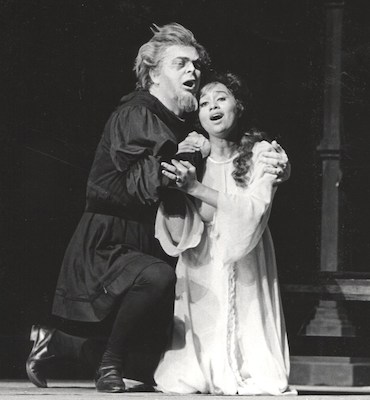 Note from William: This post continues my series of observances of historic performances that I attended at San Francisco Opera during the general directorship of Kurt Herbert Adler. This is the fifth of fourteen such observances of performances from the company’s 1966 Fall season.

The San Francisco Opera’s 1966 season had mounted five opera productions in less than a month, and only one of these, Verdi’s “Don Carlo” was an opera I had seen previously. New to me in live performance were Bellini’s “I Puritani”, Richard Strauss’ “Elektra” and Montemezzi’s “L’Amore dei Tre Re”.

The afternoon following my first “L’Amore”, I was back at the War Memorial Opera House for a Sunday matinee – my live performance ever of Verdi’s “Rigoletto”.

British dramatic baritone Peter Glossop in his debut season with the San Francisco Opera was vocally robust and convincing in the title role. I had admired his Rodrigo two weekends earlier [Historical Performances – Vickers is “Don Carlo” with Watson, Horne, Glossop and Tozzi – San Francisco Opera, October 1, 1966]. A consummate Verdi baritone, he would return two seasons later for the baritone lead in Verdi’s “Ernani”, and for one assignment in each of the two subsequent decades.

Rigoletto’s daughter Gilda was performed by American soprano Reri Grist (who, as a member of the original Broadway cast of Bernstein’s “West Side Story”, had created the role of Consuelo, the character who sings the iconic song Somewhere). Affecting in her duets with Glossop’s Rigoletto, Grist’s silvery, sublime coloratura was used to stunning effect for Verdi’s most famous coloratura aria, Caro Nome.

[Below: Rigoletto (Peter Glossop, left) vows vengeance for the abduction of his daughter Gilda (Reri Grist, right); edited image, based on a Carolyn Mason Jones photograph, courtesy of the an Francisco Opera.]

Grist’s Gilda was one of eight major coloratura or lyric roles I saw Grist perform in one or more San Francisco Opera seasons between 1963 and 1969.

I had the privilege of meeting Grist and intervieing her a half century later [A Star Among Legends: An Interview with Coloratura Soprano Reri Grist]. In that interview she cites such memorable experiences with the San Francisco Opera as her performances with Elizabeth Schwarzkopf [Historical Performances: “Cosi fan Tutte” with Schwarzkopf, Vanni, Valletti, Prey, Wolovsky, Grist – San Francisco Opera, October 19, 1963] and with Leontyne Price and Sandor Konya [Historical Performances: “Ballo in Maschera” with Leontyne Price and Sandor Konya – October 31, 1965].

Grist reserved much of her collegial praise for her performances with Alfredo Kraus. In remembering Kraus’ Duke of Mantua, Grist stated that Kraus “was a gentleman through and through and sang with elegance and style. Beautiful!”

[Below: Alfredo Kraus as the Duke of Mantua; edited image, based on an historical photograph.]

My own experiences with Kraus’ performances fully confirmed Grist’s characterization of Kraus’ singing as stylish and elegant. Kraus was the exemplar of the lyric tenor, with a beautiful tone and the vocal flexibility that is a prerequisite for the early 19th century bel canto and the late 19th century French repertories.

Indeed, the Kraus-Grist pairings as the Duke of Mantua and Gilda and (in the subsequent season) as Nemorino and Adina in Donizetti’s “L’Elisir d’Amore” were, for me, among the highlights of my operatic experiences of the 1960s. I would see Kraus also in two French roles, Gounod’s “Faust” and Massenet’s “Werther”.

During the next season another extraordinary lyric tenor, Luciano Pavarotti, would make his debut and in his first several years in San Francisco would sing bel canto roles that were prominent in Kraus’ repertory – Nemorino and Edgardo in Donizetti’s “Lucia di Lammermoor”. Yet during the next decade Pavarotti would move from the bel canto repertory to the the weightier spinto tenor roles, including role debuts as Manrico in Verdi’s “Il Trovatore”, Calaf in Puccini’s “Turandot” and Radames in Verdi’s “Aida” (each of these role debuts taking place at San Francisco Opera.

Famously, Kraus refused to accept this progression over one’s career that saw excellent lyric tenors abandon the lyric tenor repertory for that of the spinto tenor. That progression often comes at the price of vocal changes that make the lightening of the voice needed to sing the lyric roles as they were intended difficult to return to. In some cases, the heavier roles resulted in coarsening of a tenor’s voice, or even vocal disrepair.

Kraus’ never departed far from the core lyric repertory, which allowed him to perform to the standard he set into his early 70s.

German bass Walter Kreppel was an appropriately sinister Sparafucile. His duets with Glossop’s Rigoletto were well sung and brilliantly acted, Kreppel presenting a principled assasin-for-hire with a touch of humor. I had previously seen Kreppel in two appearances in San Francisco Opera’s 1963 season in the principal roles of Padre Guardiano in Verdi’s “La Forza del Destino” and as Hunding in Wagner’s “Die Walkure”.

[Below: Walter Kreppel was Sparafucile; edited image of a historical production photograph.]

The shorter of the two striking bass comprimario roles in “Rigoletto” – the tragic Count Monterone – was sung by the Australian bass Clifford Grant, in his debut season with the San Francisco Opera that would be followed by several seasons of important bass assignments. Grant made a strong impression as Monterone, who, in one of the darkest moments of an often dark opera, is led to his execution for objecting to the Duke’s molestation of his daughter.

“Rigoletto” has yet another juicy comprimario role, that of Sparafucile’s sister Maddalena, sung in this performance by English mezzo-soprano Joyce Blackham. Althoug her career was most associated with the lead role of Bizet’s “Carmen”, Blackham’s entire involvement with the San Francisco Opera was the three 1966 performances as Maddalena in the final act of “Rigoletto”. However, as Maddalena, Blackham was able to join the last act’s memorable “Rigoletto Quartet”, with Kraus, Grist and Glossop.

[Below: Maestro Francesco Molinari-Pradelli; edited image of a publicity photograph.]

Farruggio was freqeuntly called upon to stage performances for both the company’s Spring Opera Theater [SPOT] and the main Fall seasons. In the 1960s an opera was typically mounted for two of three performances, which might include cast changes (especially if a recording artist, on a record-company sponsored tour of international opera companies, might be available for only a performance or two.)

[Below: Stage Director Matthew Farruggio demonstrates the use of stage pst crop to artists selected for 1970 Merola Opera Program; edited image, based on an historical photograph.]

In the 21st century, the director’s job might include a radical reconceptualization of the staging of an opera, perhaps requiring several weeks of rehearsal time. In the 1960s at San Francisco Opera, Farruggio might be expected to confer with an artist, arriving for a scheduled performance or two, on their blocking, lighting and interaction with other principals. Such an assignment obviously required knowledge of the libretto’s stage directions. It also required the interpersonal skills to persuade artists to defer their preference for a staging that places them in whatever part of the stage maximizes the impact of their voice on the audience for a staging that provides a dramatically lucid result.

“Rigoletto” was the tenth Verdi opera I had seen (and the 20th performance of a Verdi opera). As one of the two or three most popular Verdi operas, it is unexpected that it would have taken so long to see my first “Rigoletto”. I believe that the explanation of why this was so is interesting in itself.

My interest in opera began during a period when the San Francsico Opera was one of the international opera companies that routinely hosted major opera stars, particularly those familiar from complete opera recordings. They would appear at in San Francisco or in Los Angeles and San Diego on the San Francisco Opera’s mid-20th century Southern California tours. They might appear for, say, two or three performances of a work they had recently recorded or planned to record for one of the half-dozen major classical record companies of the era.

If I had a chance to return to the casts and performances offered by the San Francisco Opera during those years, I suspect I would have made the same choices again. And, although I had a long wait for my first “Rigoletto”, I would return to the War Memorial Opera House later that season to experience the alternate cast of that opera.