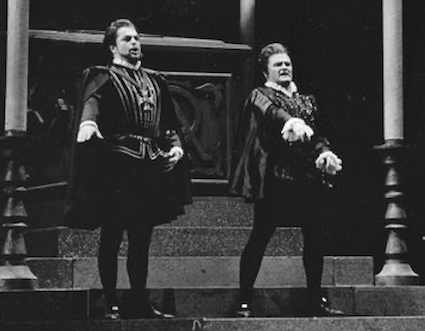 Note from William: This post continues my series of observances of historic performances that I attended at San Francisco Opera during the general directorship of Kurt Herbert Adler. This is the third of fourteen such observances of performances from the company’s 1966 Fall season.

A week after the Saturday night subscription series performance of RIchard Strauss’ “Elektra”, I attended the revival of the 1962 Dino Yannopoulos production of Verdi’s “Don Carlo” (sets by Andreas Nomikos).

The title role was sung by Canadian dramatic tenor Jon Vickers in a powerful performance. Vickers’ Carlo was enhanced by an equally effective performance by British baritone Peter Glossop, in his San Francisco Opera debut role as Carlo’s best friend and confidante, Rodrigo, Duke of Posa.

Don Carlo was Jon Vickers’ seventh role for the San Francisco Opera (the eighth would take place during the next month, the ninth a decade later). His performances were always muscular and dramatically intense.

(Vickers’ Carlo was fifth San Francisco Opera role that I have reviewed in this series of historical posts. Ultimately, I saw eight of his nine roles for the company, missing only his 1962 Canio in Leoncavallo’s “Pagliacci.)

Soprano Claire Watson, although a New York native, established her career in European opera houses. It was her success in Europe that resulted in her well-regarded parallel career as an opera recording artist. Rarely performing in the United States, she sang two roles (including the Countess in Mozart’s “Le Nozze di Figaro”) in this, her only San Francisco Opera season.

I was not impressed by Watson’s performance as Elisabetta, a role I associate both with vocal weight and dramatic sublety. Four weeks later, however, in her role as the Countess, I found her to be a compelling Mozartian.

[Below: Soprano Claire Watson; edited image of a publicity photograph.]

For me the disappointment of the evening was California soprano Marilyn Horne, assaying the role of Princess Eboli. There was an absence of coloratura lightness for her first aria Nei giardin del bello as Eboli strolled with her handmaidens through the garden. Nor did the rest of Horne’s perfornance display the requisite dramatic intensity, especially for Eboli’s most famous aria O don fatale.

Horne’s long absences from the San Francisco Opera (she did not appear in operatic roles in seasons 1967 through 1978) are explained in part by an act which drew the dangerous hostility of San Francisco Opera’s formidable general director, Kurt Herbert Adler. She withdrew from the opening production of the San Francisco Opera’s 1973 season, Donizetti’s “La Favorita”, mounted for her and Luciano Pavarotti (too late in the process for Adler to secure a comparable artist for the title role). The reason for her withdrawal – to be able to star in a new production at the New York Metropolitan Opera at a time that conflicted with her obligations to San Francisco – was not a satisfactory one for Maestro Adler.

I would not see Horne again in performance until 1979, after Horne and Adler made peace. Between 1981 and 1991 she regularly starred in San Francisco Opera productions.

“Don Carlo’s” third principal male role, that of King Philip II, as in the 1962 San Francisco performances, was sung with dramatic authority by bass Giorgio Tozzi.

[Below: Giorgio Tozzi as King Philip II; edited image, based on a production photograph, courtesy of the San Francisco Opera.]

Two other male artists performed notably in comprimario roles, Chester Ludgin as the Grand Inquisitor and Ara Berberian as the mysterious Monk who embodied the spirit of the late Emperor Charles V.

In the mid-1960s, bass-baritone Chester Ludgin, already a mainstay of San Francisco Opera Spring Opera Theater [SPOT], was one of the busiest artists on the San Francisco Opera roster. In the past two seasons he had performed principal and comprimario roles in Beethoven’s “Fidelio”, in Wagner’s “Die Meistersinger”, in Richard Strauss’ “Der Rosenkavalier” and “Ariadne auf Naxos”, in Shostakovich’s “Katerina Ismailova” and in Berg’s “Lulu”.

[Below: Bass-baritone Chester Ludgin; edited image, based on a publicity photograph.]

I had found his Jack Rance [Historical Performances: “La Fanciulla del West” with Marie Collier and João Gibin – San Francisco Opera, September 26, 1965 ] to be especially praiseworthy. His later San Francisco Opera 1966 assignments were to include the salvaging of the production of Mussorgsky’s “Boris Godunov”, mounted for the eminent bass George London. Ludgin replaced London as Boris, when London was forced to withdraw for illness.

[Below: Ara Berberian was Un Frate; edited image, based on a publicity photograph.]

Berberian earned his invitation to San Francisco’s Fall season (the “main” company) after three successful performances in the company’s 1965 Spring Opera Theater [SPOT], one as Bluebeard in Bartok’s “Bluebeard’s Castle” and two as the Bonze in Puccini’s “Madama Butterfly”.

Berberian would be a familiar voice in the comprimario bass-baritone roles for the San Francisco Opera’s 1966 through 1971 season. His performance as the Friar was one of the most memorable.

As he did for the 1962 “Don Carlo” performance cited above, Francesco Molinari-Pradelli led the San Francisco Opera Orchestra in an authoritative performance of Verdi’s masterpiece.

Maestro Molinari-Pradelli was unquestionably the San Francisco Opera’s most prolific conductor of Italian operas from his arrival in the 1957 through the 1966 season. In writing this retrospective on this performance in his final San Francisco Opera season, I reflected on how personally intertwined my own introductory experiences to live operatic performances of specific Italian works were to Molinarii-Pradelli’s conducting.

[Below: Maestro Francesco Molinari-Pradelli; edited image, based on a publicity photograph, from wikipedia.com.]

This is my personal list of operas whose first (and in some cases subsequent) performances were conducted by the Maestro: Donizetti’s “Lucia di Lammermoor”, Verdi’s “Nabucco”, “Il Trovatore”, “Ballo in Maschera”, “Forza del Destino”, “Don Carlo”, “Aida” and “Otello”, Giordano’s “Andrea Chenier”, Puccini’s “La Boheme”, “Fanciulla del West” and “Turandot”, and, in a Molinari-Pradelli venture out of the Italian repertory, Wagner’s “Lohengrin”. One week later one more opera would be added to this list of “firsts” – Montemezzi’s “L’amore dei Tre Re”.

My report on that “L’amore dei tre re” follows soon.