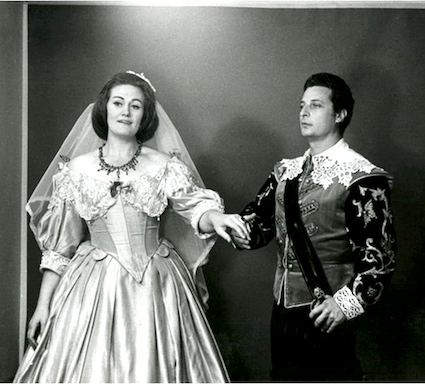 Note from William: This post continues my series of observances of historic performances that I attended at San Francisco Opera during the general directorship of Kurt Herbert Adler. This is the first of fourteen such observances of performances from the company’s 1966 Fall season.

San Francisco Opera’s 1966 main season opened with the company’s first ever performances of Bellini’s “I Puritani”. The opera was chosen as a vehicle for the Australian superstar Joan Sutherland and for the San Francisco Opera debut of the esteemed Spanish lyric tenor, Alfredo Kraus.

I attended the first performance, my first time ever taking part in “opening nighr of the opera season” – one of the most important events of San Francisco’s “social scene”. It was the only time in the 20th century that I attended an opera season opening night although, in my capacity as opera performance reviewer, that would change in the 21st century.

It was also, in addition to my first-ever “Puritani”, my first time buying a standing room ticket. (I did avail myself standing room on many subsequent opera performances in the years after this first “Puritani”.)

This was my third occasion for me to be in the audience for a Sutherland performance, and the second time she introduced a Bellini heroine to San Francisco Opera audiences (and to myself) [See Historical Performances: Sutherland, Cioni in Bellini’s “Sonnambula” – San Francisco Opera, September 14, 1963]. Sutherland, in fact, six years later, would be the artist who introduced me to the most famous role in any Bellini opera, the title role in “Norma”.

At this stage in Sutherland’s career, I was much more interested in seeing her perform in the celebrated Bellini and Donizetti soprano roles of the bel canto tradition than in such standard repertory works as Verdi’s “La Traviata”, which she had performed in San Francisco two seasons prior [Historical Performances: Joan Sutherland, Ilosfalvy, Waechter in “La Traviata” – San Francisco Opera, November 5, 1964].

As Elvira, Sutherland was spectacular, especially her performance of the great showpieces – Son vergin vezzosa and Qui la voce sua soave. The latter provided me my second time seeing a Sutherland “mad scene” (after the sleepwalking scene in “La Sonnambula”). Eight years later, I traveled to the San Diego Opera to see Sutherland perform the most famous mad scene of all, that of Lucia’s in Donizetti’s “Lucia di Lammermoor”.

“Puritani” would be Sutherland’s last San Francisco Opera performance for a half-decade. She sang one role in each of 12 San Francisco Opera seasons between 1961 and 1984. Except for her performance in Donizetti’s “Lucia di Lammermoor” in 1961, I attended at least one performance of whatever opera she was performing in those seasons. I also attended her performances in four seasons at the San Diego Opera between 1974 and 1984 (where I was able to see her perform not only her signature role of Lucia di Lammermoor, but such rarities as the title role in Cilea’s “Adriana Lecouvreur” and in the role (that Verdi wrote for Swedish soprano Jenny Lind) of Amalia in Verdi’s “I Masnadieri”.

[Below Elvira (Joan Sutherland, left) takes the hand of her beloved, Arturo (Alfredo Kraus, right); edited image, based on a production photograph, courtesy of the San Francisco Opera Archives.]

Alfredo Kraus’ discography of opera recordings were testimony that his reputation for vocal excellence was well-deserved, so the announcement that Alfredo Kraus’ belated San Francisco Opera debut would be on the season opening night opposite Sutherland created great excitement.

“Puritani” is an opera with wall-to-wall melody, and the role of Arturo – if somewhat in the shadow of the prima donna and lacking a “big number” aria of his own – contains beautiful audience-charming passages. I was won over and I suspect most of the audience was also as he opened the first act quartet O te, o cara, amor talora, which Kraus begins, later to be joined by Sutherland, and then the bass and baritone singing a counter-melody together, to magical effect.

In this bel canto opera with four main roles, the two lower-voiced artists held the own even in a quartet that included Sutherland and Kraus. Their sequential duets that close the second act – Il rival salvar tu dei and Suoni la tromba – were energetic and wholly effective.

[Below: Raymond Wolansky was Riccardo; edited image, based on an historical production photograph.]

When General Director Kurt Herbert Adler mounted a work that was new to the company, his decision as to whether to create a new opera production or import one from elsewhere often indicated what operas he expected to continue in the San Francisco Opera repertory in future seasons.

In the case of “Puritani”, San Francisco Opera performances in near future seasons were obviously not contemplated. Adler instead turned to Milan’s Ercole Sormani, whose company’s heritage included sets and backdrops created for many of the early 19th century operatic works when they were new.

Adler was to call on Sormani to provide sets not only for “Puritani” mounted for Sutherland, but for Verdi’s “Ernani” mounted in 1968 for Leontyne Price, and Verdi’s “Luisa Miller” mounted in 1974 for Luciano Pavarotti. Other companies in the United States and elsewhere own productions with the Sormoni name that are scheduled for performance into the 2020s.

[Below: the Ercole Sormoni used for the 1966 San Francisco Opera performances of Bellini’s “I Puritani, with Joan Sutherland (Elvira), Nicola Ghiuselev (Giorgio Walton) and Alfredo Kraus (Arturo) standing on the raised section of center stage; edited image, based on a production photograph, courtesy of the San Francisco Opera Archives.]

The performances were staged by Italian director Renzo Frusca, whose main work took place in major Italian opera companies during the 1960s. His staging was traditional and most certainly involved discussions with Sutherland and Kraus as to where on the War Memorial Opera stage they preferred to stand during any part of the performance, so to maximize the effect of their singing.

[Below: Director Renzo Frusca; resized image of a publicity photograph, courtesy of the San Francisco Opera..]

Historically, the main reason for reviving “I Puritani”, which I find dramatically less interesting than Bellini’s “I Capuleti e i Montecchi”, “La Sonnambula” and, especially, “Norma”, is the presence of a star soprano as Elvira. I have seen it three times since, in performances with Beverly Sills at the Los Angeles Opera and, less successfully, at the San Francisco Opera. I last saw it in 1993 in a dramatically rather plausible Andrei Serban production at the San Francisco Opera starring June Anderson and Gregory Kunde.

For musical splendor, the 1966 Sutherland-Kraus production remains a vibrant memory.