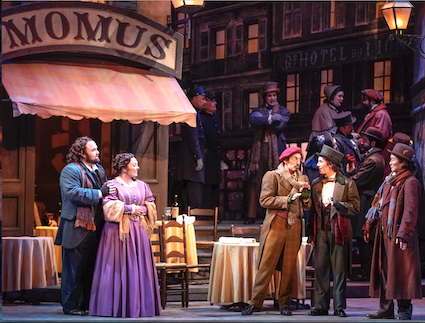 Sarasota Opera’s 2020 winter season opened in February with a production of Puccini’s “La Boheme”, the quintessential Italian opera. I reviewed the ninth of 13 scheduled performances. Sarasota Opera’s “Boheme” was well-sung and admirably staged. Regrettably, one week after the performance, the fast-moving spread of the Covid-19 virus led the Sarasota Opera to cancel the remainder of its Winter 2020 season, including the last three “Boheme” performances.

Missouri soprano Anna Mandina met all the expectations of a performance as Mimi – vocal control and expressiveness, affecting acting and a spinto quality to her voice in her famous first act aria Mi Chiamano, Mimi.

[Below: Anna Mandina as Mimi; edited image, based on a Rod Millington photograph, courtesy of the Sarasota Opera.]

[Below: William Davenport as Rodolfo; edited image, based on a Rod Millington photograph, courtesy of the Sarasota Opera.]

It is “Boheme’s” third act at the inn by Paris’ Barrière d’Enfer, that provides us with insights into how Mimi and Rodolfo each view their evolving relationship. As Mimi and Rodolfo reveal the inner turmoil each faces, Puccini, always the superb melodist, infuses that act with some of his most breathtakingly beautiful vocal passages.

Mandina was compelling in Mimi’s third act duet with Marcello, E freddo, Entrate, in which she tells Rodolfo’s best friend how Rodolfo’s jealousy stifles her. After the duet between Mimi and Marcello, Rodolfo appears. As Rodolfo, Davenport exuded pathos and vocally security in delivering Rodolfo’s revelation Marcello, finalmente! of his awareness that Mimi is dying and his poor lodgings accelerate her decline.

Once both Mandina’s Mimi and Davenport’s Rodolfo fully comprehend the situation facing their love, they launch into one of Puccini’s melodically rich ensemble passages Addio, dolce svegliare, which Mandina and Davenport performed superbly.

Italian baritone Filippo Fontana was Marcello, a character, like Mimi and Rodolfo, who appears prominently in each of the four acts. Of the four roommates, Marcello displays the widest range of emotions – love, jealousy, anger, joy, despair – which Fontana portrayed skillfully, enlisting his rich baritone voice.

California soprano Jessica Sandidge showed the complex personality of Marcello’s girlfriend Musetta – flirtatiously performing Musetta’s signature aria Quando me’n vo in the Cafe Momus scene, fighting with Marcello at the Barrière inn, and taking on the role of empathetic caregiver, bringing Mimi to the garret to spend her final moments with Rodolfo.

[Below: the love affair between Marcello (Filippo Fontana, left) and Musetta (Jessica Sandidge, right) again proves to be tumultuous; edited image, based on a Rod Millington photograph, courtesy of the Sarasota Opera.]

Another artist who performed in both “La Boheme” and “La Wally” (see above) was South Korean bass Young Bok Kim. He proved a compelling Colline, his deep bass voice well suited to the character’s Vecchia zimarra, his farewell to the old coat he would then hock for medicine.

Three Sarasota Opera Apprentices rounded out the principal cast. Kevin Thomas Harvey was the toy vendor Parpignol, Jose Cuartas was a Customs Sergeant and William Huyler was a Customs Guard.

Maestro Victor DeRenzi and the Sarasota Opera and Chorus

Brazilian director Jesse Martins was Chorus Master (the adult chorus consisting of both Sarasota Opera Studio Artists and Apprentices). The children’s choruses were performed by the Sarasota Youth Opera under the guidance of Pennsylvania Maestro George Hemcher.

The Sarasota Opera stage productions are famously loyal to the stated intentions of composers and librettists, eschewing the liberties that directors influenced by regietheater concepts take with an opera’s story line, time periods or location.

Each of the three sets (the Bohemians’ garrett for acts I and IV), the Cafe Momus and the Barrière d’Enfer was effectively presented in Gordon’s sets. Freiman’s staging was efficient and theatrically solid.

The Sarasota Opera 2020 Winter season consisted of four operas, including “Romeo et Juliette” and “La Wally” (see above) and Donizetti’s “L’Elisir d’Amore” [Review: Sarasota Opera’s Endearing “Elixir of Love” Starring Geoffrey Agpalo and Adelaide Boedecker – March 5, 2020]. The four consecutive nights of performances I reviewed (which included the opening night of “La Wally”) was the first opportunity for audiences to attend all four Sarasota opera productions on consecutive days. Several additional opportunities had been planned for consecutive day “four opera packages” over the subsequent two weeks, but the necessary cancellation of the final ten days of the season removed these opportunities.

The most popular operas of Italy’s two most famous Italian opera composers are Puccini’s “La Boheme” and Verdi’s “La Traviata”. Both “Boheme” and “Traviata” are based on mid-19th century French literary works and both operas are about the human consequences of a young woman’s suffering and death by tuberculosis, a fatal infectious disease.

The necessary public health responses to Covid-19, a much more infectious disease, will require the cessation of opera performances throughout the world for at least the next few weeks. (All performances of Lyric Opera of Chicago’s Sir David Pountney production of Wagner’s “Ring of the Nibelung”, which I was scheduled to review in April, are canceled.)

Rehearsals for opera productions scheduled for future dates are likely to be affected as well. (If “social distancing” is still mandated, how do you assure that onstage and in the orchestra?)

Opera and musical theater has responded to the devastation of AIDS in the late 20th century through such works as Jonathan Larson’s “Boheme”-based musical “Rent” and Péter Eötvös and Mari Mezei’s opera “Angels in America”. Whether the present public health crisis will inspire new operatic works awaits the future return to “normalcy”.