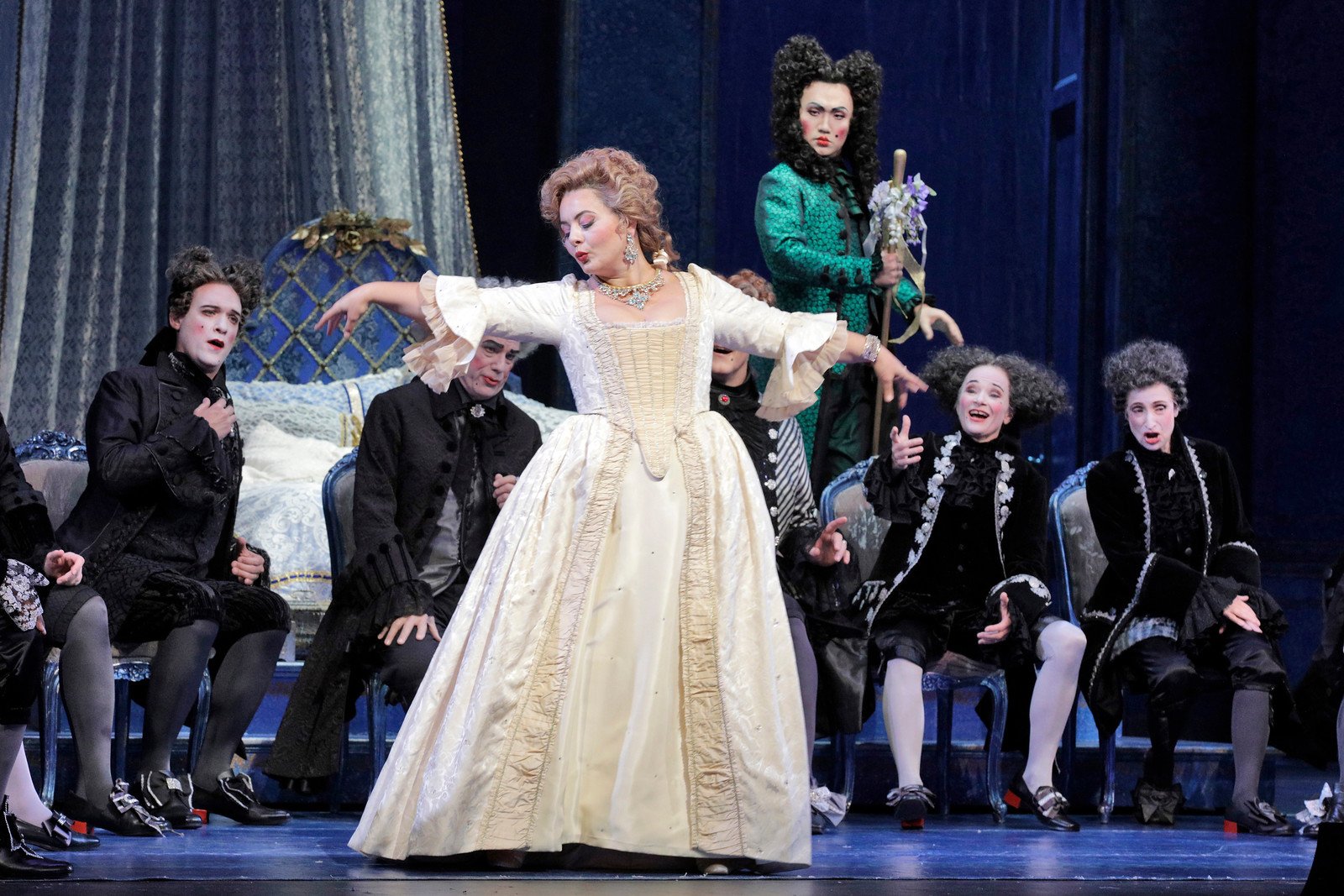 Even though all of the season’s performances of “Manon Lescaut” have taken place, it was an unambiguously successful run of a deserving opera. It was a confirmation of the high quality performances one can expect from the San Francisco Opera.

There is melodramatic power in a Puccini leitmotiv performed fortissimo by the San Francisco Opera Orchestra. The big sound created by the orchestra in its uncovered orchestra pit resounds in the acoustically lively War Memorial Opera House. I often refer (affectionately) that the War Memorial is the “House of Puccini”. There is no place I would rather see and hear a Puccini opera performed.

Thoughts on the Second Performance

I saw the production and cast for a second time, giving me the opportunity to comment further on the performance, production, cast and opera.

The Olivier Tambosi production “Manon Lescaut” was one of the first new productions of the new era in San Francisco Opera represented by the consecutive general directorships of David Gockley and Matthew Shilvock. Each of the opera’s four scenes has a distinctive set.

[Below: Manon Lescaut (Lianna Haroutounian, front, second from right) has attracted the attention of the Chevalier des Grieux (Brian Jagde, front right); edited image, based on a Cory Weaver photograph, courtesy of the San Francisco Opera.]

For the first act, the scene inn at Amiens takes place in a courtyard framed by an overhanging roof with a three story-structure in the background. The centerpiece of the second scene, Manon’s bedroom in Geronte’s palace, is a ceiling high drapery that adorns Manon’s bed.

The highly dramatic third scene takes place adjacent the woman’s prison holding Manon and other women accused of prostitution. Each of the women will be marked by what appears in a coup de theatre to be a sizzling branding iron.

The austere fourth and final scene evokes the physical and emotional desolation created by Manon’s downfall. Taking place in an a desert on the outskirts of New Orleans (never take geography lessons from opera), the scene demonstrates both Puccini’s and the influence of the third act of Wagner’s “Tristan and Isolde” on Puccini’s approach a familiar story. [See my essay: Echoes of Tristan – Thoughts on Puccini’s “Manon Lescaut”.]

“Manon Lescaut” is an opera that requires large voices, capable of projecting Puccini’s lush melodies over the intense wall of sound created by a full-sized orchestra. That requirement was met by casting Armenian soprano Lianna Haroutounian in the title role and New York tenor Brian Jagde as Manon Lescaut’s lover, Chevalier des Grieux.

I had praised the vocal prowess of both Haroutounian and Jagde in the earlier performance and they were both in superb voice for this opera matinee. My sole criticism of the opening night performance of Haroutouian’s Manon – her tendency that night towards overgesturing in her acting. Puccini provides as much melodrama as the opera needs in his orchestral scoring, so no large gestures are needed. I gladly report that all trace of that tendency had disappeared in this, the fifth performance in the run.

Also impressive in both performances, were Anthony Clark Evans as Manon’s brother, Lescaut, and Phillip Skinner as Geronte, the wealthy government official who replaced Des Grieux’ passion and poverty with his wealth and riches.

Evans’ appearances as Zurga this past summer at the Santa Fe Opera and his San Francisco Lescaut confirm that Evans is an effective actor who possesses an elegant lyric baritone. Skinner has had a busy career as a bass-baritone comprimario, spanning over three decades with the San Francisco Opera. I found Skinner’s Geronte to be an extraordinary characterization, robustly sung and persuasively acted.

[Below: Geronte (Philip Skinner, left) becomes interested in a prediction by Lescaut (Anthony Clark Evans, right); edited image, based on a Cory Weaver photograph, courtesy of the San Francisco Opera]

Maestro Nicola Luisotti returned as a guest conductor to the San Francisco Opera, where he had spent a decade as the company’s Music Director. He is now the Principal Guest Conductor for Madrid’s Teatro Real. Luisotti’s continued rapport with the San Francisco Opera Orchestra and Chorus, obvious since his first guest performance here 14 seasons ago, resulted in a confidently-led orchestral and choral performance. Particularly striking was the Orchestra’s performance of Puccini’s powerful entr’acte, the famous Intermezzo between the third and fourth scenes.

Puccini’s music was influenced by that of composer Richard Wagner. In “Manon Lescaut’ one is always aware of Puccini’s adaptation of chromatic Wagnerian harmonies and the ever present melodic leitmotivs that Puccini has taught us represent a human emotion, be it intense love, fear, despair or, perhaps, the recollection of a happier time.

[Below: Maestro Nicola Luisotti; edited image, based on a John Martin photograph, courtesy of the San Francisco Opera.]

“Manon Lescaut” is one of the masterpieces of the Italian verismo movement that burst upon the operatic scene with Mascagni’s”Cavalleria Rusticana” in 1890. The operatic subjects were dramatic events in the lives of “common folk”, rarely a concern of opera in its previous 250 years of existence.

[Below: the student, Renato des Grieux (Brian Jagde, standing center), has become infatuated with a young woman he has met at an inn in Amiens; edited image, based on a Cory Weaver photograph, courtesy of the San Francisco Opera.]

San Francisco Opera General Director Matthew Shilvock has reinvigorated the company’s attention to Italian verismo (beyond the familiar trio of Puccini’s most popular operas – “Boheme”, “Tosca” and “Madama Butterfly”.) Recent productions of Giordano’s “Andrea Chenier”, Mascagni’s “Cavalleria Rusticana” and Leoncavallo’s “Pagliacci” and this season’s “Manon Lescaut” point the way to a further exploration of this dramatic repertory, so perfectly suited to the San Francisco Opera and the War Memorial Opera House.