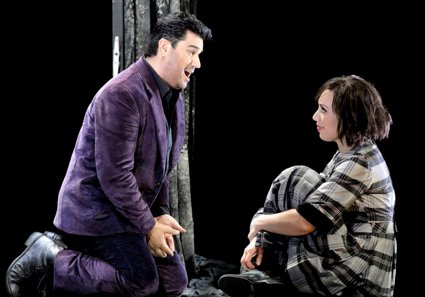 The following conversation continues discussions that began with Rising Stars: An Interview with Saimir Pirgu and continued through A Conversation with Lyric Tenor Saimir Pirgu.

Wm: I am pleased that you have returned to Los Angeles, Saimir!  The first time I ever saw you perform was your American debut in Los Angeles as Rinuccio in Hollywood director Woody Allen’s production of Puccini’s “Gianni Schicchi under Maestro James Conlon. You were only 26 at the time.

Now you have returned to Los Angeles in another Puccini role, that of Rodolfo in Barrie Kosky’s production of “La Boheme” again under Maestro Conlon. Rodolfo is the role that your mentor, Luciano Pavarotti, regarded as his “lucky role”. Did you ever talk to Pavarotti about how to approach such an iconic role?

SP: To tell you the truth, no I didn’t, considering that at that time I was very young and was singing more lyrical roles such as “L’Elisir d’amore”, “Lucia di Lammermoor”, “La traviata” and Mozart as well. Once in a while I would sing with him the famous aria Che gelida manina, especially to understand the limits on which to focus the attention of my future studies. Rodolfo in “La bohème” will always be one of Pavarotti’s top roles, a splendid goal to achieve as well as a reference point for all my performances.

Wm: Prior to this “Boheme” I’ve reviewed your performances in lyric tenor roles by Mozart, Bellini, Donizetti, Verdi and Puccini.

We previously discussed some of the new directions you were pursuing. Since then you’ve had significant new roles which you have performed or which have been announced.You’ve added a couple of roles to your core Verdi repertory (which had consisted of Alfredo in “La Traviata” and the Duca in “Rigoletto”). You’ve also added the role of Riccardo in Verdi’s “Ballo in Maschera”, first in Tel Aviv in a concert version and in full staging at the Teatro Regio Parma.

Another new role is Gabriele Adorno in “Simon Boccanegra” which you performed at the Teatro San Carlo in Napoli. I’ve always liked Adorno, who has beautiful music to sing, and who has the best timing of any character in opera, shifting sides in a power struggle at a crucial moment and ending up Doge of Genoa as a result.

SP: I think that the role of Gabriele Adorno is paradigmatic as a definition of a change in vocal development, and the fact that my first performance of it was successful leads me to think that I have taken the right path. A few years have passed since our last meeting and as you point out my repertoire has been taking new directions towards the lead tenor roles in Verdi’s “Un ballo in maschera”, Bizet’s “Carmen” and Verdi’s “Simon Boccanegra” as well as French roles such as Massenet’s “Werther” and Berlioz’ “La damnation de Faust”, which have become successful signature roles for me.

I believe singers should always listen to their bodies and particularly their voices, complying with their needs following their natural and physiological development. I consider trying out new roles as something very positive which, if done with awareness, allows you not only to test your limits but also to find new horizons.

Wm: I’m intrigued by the reports of your forays into the Slavic languages. Next February, you will be singing Lensky in Tchaikovsky’s “Eugene Onegin” (in Russian) in Robert Carsen’s production at Teatro dell’Opera di Roma, again conducted by Maestro Conlon.

I’m especially interested in the reports of your performances in Polish as the Shepherd in Kasper Holten’s production of Szymanowski’s “King Roger” at the Royal Opera House, Covent Garden with Mariusz Kwiecien as King Roger and later at the Opera Australia in Sydney.

[Below: the Shepherd (Saimir Pirgu, standing on first level) attempts to persuade King Roger (Mariusz Kwiecien, center, above) to cast aside his inhibitions and surrender to his passions in the Kasper Holten Royal Opera House producton of Szymanowski’s “King Roger”; edited image, based on a Keith Saunders photograph for the Royal Opera House, London.]

SP: My fortune is my language, Albanian, an extremely old language, among the oldest in Europe. It’s a very difficult language, but also very flexible towards the other European languages, which allowed me to speak a lot of them and to learn new ones without too many problems. I remember, for instance, I didn’t have problems with German, French and particularly with Slavish languages, which as suitable for singing, especially Russian.

A bit trickier was, on the contrary, my approach to “King Roger”, which I debuted at the Royal Opera House in London: it required a very demanding pronunciation of the Polish language, rather arduous to merge with Szymanowski’s difficult music. It was quite a challenge, but I was successful and am ready to face others and widen my horizons.

SP: It was a directing choice of Ferzan Ozpetek who, thanks to his experience, was realized with plenty of sensuality presenting this important moment of the opera as natural as possible. Since he is a film director with the intent to strike the audiences’ feelings, he tried to show them to an opera audience, who does not normally like to take so many risks. All this was done, in my opinion, with great class and in full respect of the music.

Wm: You’ve had the role of Roméo in Gounod’s “Roméo et Juliette” in your repertory for some time, and performed it at the Gran Teatre del Liceu in Barcelona last year for the bicentennial observation of Gounod’s birth.

You have been adding several other iconic French roles, including Don Jose in Bizet’s “Carmen”, which you performed in Bangkok under Maestro Zubin Mehta. You’ll be repeating the role of Don Jose in different productions at the Deutsche Oper Berlin this fall and at the Teatro San Carlo next year. Maestro Mehta has been present at both your role debuts as Riccardo and Don Jose. Your career has been associated with such formidable conductors as Claudio Abbado and James Conlon. I assume that role debuts with such esteemed conductors are both challenging and rewarding.

[Below: Don Jose (Saimir Pirgu, left) has killed Carmen (Veronica Simeoni, right) in a production of Bizet’s “Carmen” at the Thailand Cultural Center, Bangkok conducted by Maestro Zubin Mehta; edited image, based on a Thanakorn Chomnawang photograph, courtesy of saimirpirgu.com.

SP: Yes, absolutely. I was very lucky to have started my career as a very young man with Maestro Claudio Abbado when I was 22 and to continue it with so many important conductors. One cannot but learn from these great Maestros: each moment spent with them is a moment of growth, study, and enrichment, and I have always wanted to learn as much as I could from them.

Wm: The French repertory includes two major operatic expositions of the character of Faust. You’ve already performed Faust in Berlioz’ “Damnation of Faust”, which you sang at the Bolshoi Theater in Moscow. This winter you add the role of Gounod’s Faust at the Opera Australia in Sydney in Sir David McVicar’s production (and which you will perform in a different production at the Zurich Opera).
And, to continue your assumption of French operatic interpretations of Goethe’s literary works, you added the title role of Massenet’s “Werther” to your repertory at the National Theater of Tokyo.
Five years ago, we spoke about the role of Werther, and you said you regarded as “bigger than a typical lyric role” and that you would never sing it in a large house. You defined those “typical lyric roles” as Donizetti and early Verdi, especially Alfredo and the Duca di Mantua. Many of the roles you have added – Don Jose, Pinkerton and Rodolfo – are arguably “bigger than a typical lyric role”. Are you finding that your present voice has more weight than you were expecting to have in your mid- and late 30s?

SP: As you noticed in your review of my Los Angeles Opera Bohème [Review: A Beautifully Sung “La Boheme” with Saimir Pirgu and Marina Costa-Jackson – Los Angeles Opera, September 14, 2019], my voice has been developing in these past few years. This took place without losing the lyrical tenor flexibility and I am so glad it has happened. Five years ago I thought my vocal development towards such tenor roles as Gabriele Adorno in “Simon Boccanegra”, Riccardo in “Un ballo in maschera” and “Werther” would be slower, but my voice seems to respond earlier and quite successfully to this new repertoire. I still believe, and with this I follow on what I mentioned before, that if a role presents difficulties, it is not a problem to take a step back, but if it keeps giving successful results, one should proceed on the new path – always with caution and awareness – following his or her own natural vocal development either with repertoire choices and study.

Wm: Thanks, again, for another informative conversation. I look forward to continuing these in the future.