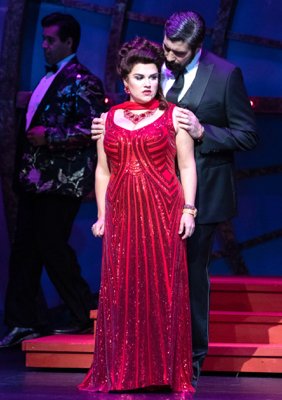 “The Abduction from the Seraglio”, one of Mozart’s seven major operas, is the most problematic to stage. Composed for the “Enlightened Monarch” Austria’s Emperor Joseph II, the tale of European women kidnapped and sold into slavery to a Turkish pasha contains minefields for directors wishing not to offend 21st century sensibilities.

Director Alison Moritz developed a concept, first for the New Orleans Opera, then further revised for the Lyric Opera of Kansas City, that transformed the story into a 1940s Hollywood cinematic fantasy, eliminating most of the perceived minefields.

Selim Pasha, rather than being a Turkish potentate with a harem of women, runs a nightclub whose entrance has a blazing neon sign “Girls Girls Girls”. Moritz’ ideas worked well enough, albeit her idea of having spoken dialogue in English that conformed to her reconceptualization proved dissonant with the unchanged German text of Mozart’s arias.

The reason why “Abduction from the Seraglio” is a masterpiece is not its plot, but the music that Mozart composed for the opera’s five principal singers. Lyric Opera, performing in the expansive Kauffman Center for the Performing Arts, provided a cast able to do justice to Mozart’s genius.

That cast was led by Connecticut soprano Kathryn Lewek as Konstanze. In Moritz’ production, Konstanze is a lounge singer in Pasha’s club. Konstanze has three major arias in just the opera’s first act, making it one of Mozart’s most challenging roles. Lewek sang her first aria, Ach, ich liebte, with glistening top notes.

Next, Lewek sang the affecting Traurigkeit ward mir zum lose, perhaps Mozart’s saddest aria. She was a sensation in her third aria, Marten aller arten, whose leaping intervals, rapid runs and coloratura fireworks presages the music Mozart wrote for the “Magic Flute’s” Queen of the Night.

[Below: Konstanze (Kathryn Lewek, left) is unresponsive to the attentions of Pasha Selim (Matthew J. Williamson, right); edited image, based on a Karli Cadel photograph, courtesy of the Lyric Opera of Kansas City.]

Kansas tenor Ben Bliss is an exemplar of the Mozartean tenor, bringing to the role of Belmonte purity of tone, vocal control and artistic sensitivity.

[Below: Konstanze (Kathryn Lewek, left) consoles Belmonte (Ben Bliss, right) who believes that he has endangered both of their lives; edited image, based on a Karli Cadel photograph, courtesy of the Lyric Opera of Kansas City.]

Minnesota bass Matthew Boehler was outstanding in the role of Osmin, possessing the strength deep in the bass range to do justice to Mozart’s music, but also the ability to project a complex character. Boehler portrayed an Osmin that is perpetually annoyed by the European captives he is supposed to control, but whose interactions with them – such as his rollicking duet Ich gehe, doch rate ich dir with Gilmore’s Blonde – suggest that he is constantly intrigued by his charges.

If one reads Mozart’s letters to his father during the composition of “Seraglio”, one understands how interested Mozart was in the character of Osmin. Mozart envisioned a much larger part than assigned to him by the librettist, whom he prevailed upon to provide new text for the composer to set to music. In many productions of “Seraglio” through the two centuries plus the opera has been performed, Osmin is played an incorrigible buffoon, making Pedrillo’s fear that he had seduced a willing Blonde seem implausible.

[Below: Belmonte (Ben Bliss, right) attempts to persuade an unconvinced Osmin (Matthew Boehler, center) that he should gain entrance to the Club Seraglio; edited image, based on a Karli Cadel photograph, courtesy of the Lyric Opera of Kansas City.]

In Moritz’ concept, the Osmin becomes a sort of everyman – an everyman determined to control the woman he loves. Osmin’s languid aria Wer din liebchen hat gefunden (beautifully sung by Boehler) explains to Belmonte that a male should not only seek a woman’s affections, but should lock her away once he’s found her.

Director Moritz has no intention of leaving this Osmin unreformed. When Osmin’s anger flares in his final scene, Selim Pasha (a non-singing role played with distinction by stage and television actor Matthew J. Williamson) gets Osmin to suppress his errant machismo, so much so that Rachele Gilmore’s Blonde rewards Boehler’s Osmin with an affectionate parting kiss.

Michigan tenor Joseph Leppek made a strong impression as Pedrillo – who with his lover, Blonde, was captured along with Konstanze. Leppek brought energy and vocal power to the martial aria Frisch Zum Kampfe in which Pedrillo summons his courage. He displayed lyric beauty in his guitar-accompanied serenade In Mohrenland gefangen war, and comic mastery in Pedrillo’s rambunctious duet Vivat Bacchus! Bacchus liebe! with the tipsy Osmin.

I have admired Leppek’s appearances at the Glimmerglass Festival and the Central City (Colorado) Opera. Notably, he sang the lead role of Tony in Bernstein’s best-loved musical [Review – Glimmerglass Festival’s Dazzling “West Side Story”: Youthful Artistry, Theatrical Authenticity, July 19, 2018. Leppek’s Pedrillo showed that, in addition to his being persuasive in the romantic role of Tony, he excels in a comic tenor role as well.

[Below: Pedrillo (Joseph Leppek, right) and Blonde (Rachele Gilmore, left) defend themselves; edited image, based on a Karli Cadel photograph, courtesy of the Lyric Opera of Kansas City.]

[Below: Rachele Gilmore as Blonde; edited image, based on a Karli Cadel photograph, courtesy of the Lyric Opera of Kansas City.]

Maestro Michael Christie and the Lyric Opera Orchestra and Chorus

In his Lyric Opera of Kansas City debut, New York conductor Maestro Michael Christie elicited from the Lyric Opera Orchestra a performance that brought forth the subtleties of Mozart’s majestic score beautifully..

For those who have the opportunity in the future to see any of this performance’s five principal singers in their respective roles, I strongly recommend that you do so.