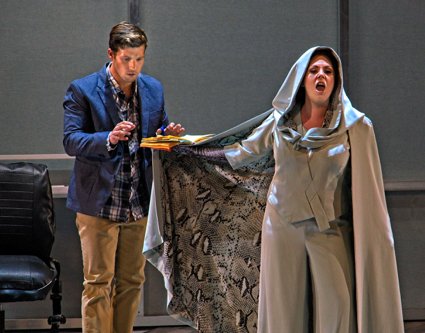 California composer Jake Heggie, in collaboration with librettist Gene Scheer, has composed another richly melodic, major new work. The new opera,”If I Were You” was created for the impressive voices and imposing talents of the young artists of the Merola Opera Program, that is associated with the San Francisco Opera.

A dramatically satisfying, through-composed opera, for Heggie and Scheer, “If I Were You” has thematic relevance for the present era. Our identities are constantly barraged with suggestions of how they might be improved if only we were to engage in a certain activity or were to buy a commercial product.

Instead of the celestial angels of “It’s a Wonderful Life”, the supernatural force is the shape-shifting Devil, Brittomara (played in the world premiere cast by Texas mezzo-soprano Cara Collins).

The object of the Brittomara’s human intervention is Fabian (Illinois tenor Michael Day), who, though aspiring to be a writer, is dissatisfied with his life and imagines that he would be better off in other circumstances.

Brittomara revives him from a fatal automobile accident, whose wreckage is a symbolically prominent feature of the opera’s staging. A “chance meeting” with Diana (Georgia soprano Esther Tonea) introduces the character that ultimately understands the bargain that Fabian has made.

The three main parts – Brittomara, Diana and Fabian – are unsparing in their vocal demands. The three principals for the world premiere – Cara Collins, Esther Tonea and Michael Day – each gave extraordinary performances.

Collins’ fine mezzo-soprano was employed not only to demonstrate the more sinister aspects of her character, but also some real opportunities for humor, including a bit of vocal patter when Brittomara shapeshifts into the hairdresser, Brittni.

Day’s Fabian, as the opera’s primo uomo has interesting music throughout, but shines most brightly in a powerful duet with Diana in the closing scenes.

[Below: In the Devil’s auto repair shop, Fabian (Michael Day, right) runs into Diana (Esther Tonea, left), whom he remembers from college; edited image, based on a Frank Wing photograph, courtesy of the Merola Opera Program.]

The bargain Brittomara offers in exchange for his soul: by uttering a Sanskrit phrase Fabian will be able to exchange his body and memory with anyone he chooses and can move from person to person as many times as he wishes.

[Below: Diana (Esther Tonea, seated right) sits at the bar that tended by her friend Selena (Patricia Westley, left) and Brittomara (Cara Collins, center); edited image, based on a Frank Wing photograph, courtesy of the Merola Opera Program.]

Each of the secondary roles was in competent hands (and voices). As Fabian’s boss Brazilian bass-baritone Rafael Porto gave a vivid portrait of an officious and demeaning employer.

[Below; Fabian (Michael Day, left) feels bullied by his overbearing boss, Putnam (Rafael Porto, right) as the faint image of Brittomara (Cara Collins, behind Fabian) stands ready with a proposal; edited image, based on a Frank Wing photograph, courtesy of the Merola Opera Program.]

By singing the Sanskrit phrase, Day’s Fabian merges himself with Putnam in a transformation represented by a textile web. Fabian’s discarded body becomes the first of a host of zombies that represent bodies Fabian has inhabited, each time adding memories and attributes of the body he takes over.

Fabian, now in Putnam’s body, finds that body to hold no advantage in any romantic pursuit of his desired Diana, and so he decides to merge with Paul (lustily performed by Wisconsin baritone Timothy Murray), a player with the women in a local bar.

[Below: Fabian’s Paul, for whom a sexual adventure ends in gunfire, transforms himself into the body of the responding policeman, Jonathan (Edward Laurenson, left); edited image, based on a Frank Wing photograph, courtesy of the Merola Opera Program]

The three other artists that have a piece of Fabian are the policeman Jonathan (performed by New Zealand baritone Edward Laurenson), the photographer David (with Missouri tenor Brandon Scott Russell making a strong positive impression) and California soprano Patricia Westley, who effectively performs the role of Diana’s girl pal, Selena.

The cast-off bodies of the persons into whom Fabian has transformed himself form a chorus of zombie-like beings.

[Below: Diana (Esther Tonea, right, below) and Brittomara (Cara Collins, right, above) are surrounded by the zombie cast-offs of Fabian’s former selves, including those of Selena (Patricia Westley, front left ) and Paul (Timothy Murray, front, second from left); edited image, based on a Kristen Loken photograph, courtesy of the Merola Opera Program.]

Ultimately, in any permutation of the Faust legend, the final disposition of the Faustian contract has to be decided. In this case, Diana (who does not appear in Green’s original story) forces Fabian to confront an existential question. Does he want to spend eternity inhabiting other people’s bodies and souls or would he prefer to live and die in his own body? Presented in these terms, Fabian chooses the latter, and the opera’s denouement takes place.

The new opera received an affectionate performance from the Merola Opera Orchestra, under the baton of Maestra Nicole Paiement. Heggie’s beautifully crafted orchestral score and vocal writing is respectful of the talented young voices chosen for the four performances.

Heggie has developed operas that can be performed both in smaller venues as well as the larger stages associated with major American opera companies. In the modest stage spaces afforded by the War Memorial Veteran’s Herbst Theater, Designer Piniero has created a serviceable physical set, onto which Director Keturah Stickann was able to create fast-paced stage action.

The lighting design was by Lucas Krech. Projections were designed by Peter Torpey. The sound designer was Teddy Hulsker. Kip Cranna was dramaturg.