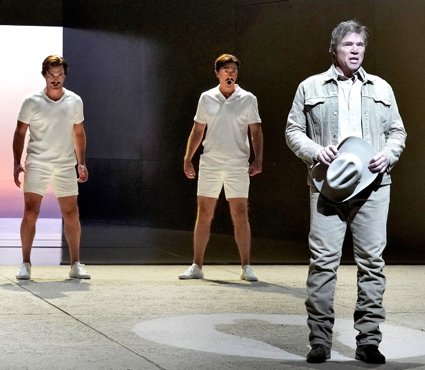 New York stage director R.B. Schlather conceived a production intended to bypass what many regard as the inherent absurdities of Lorenzo da Ponte’s libretto to delve deep into the subconscious motivations of the opera’s six characters.

Schlather has commented on the actions of those characters: “I think everyone behaves badly, by which I mean everyone hurts someone else because of their own deep hurt. And those painful feelings are what make the piece so uncomfortably relatable. . . My practice is to strip away decoration in our repertoire, to clear away a lot of the clutter and see what’s underneath the assumptions and the traditions . . . [Opera] is the labor of using music and poetry and movement to express what’s honest and true, albeit in the most artificial, unreal ritual. We know that this is not real . . . but it can transport us, if we let it.”

The result was fascinating (and if some may find Schlatter’s approach unsettling, he appears to have intended it to be so).

[Below: Director R. B. Schlather; edited image, based on a Matthew Placek photograph for Columbia Artists.]

Among the “Cosi clutter” that Schlather’s production strips away are any literal references to time and place. Florida designer Paul Tate DePoo III’s sets consist of plain walls, with two rectangular openings and a floor trapdoor into and out of which characters walk, lurch or roll.

[Below: Dorabella (Emily D’Angelo, left) has failed to recognize that two men whom Don Alfonso (Rod Gilfry, behind door, second from right) have identified as his friends from Albania are actually her sister’s fiancé Guglielmo (Jarrett Ott, second from left) and her fiance Ferrando (Ben Bliss, left) to the amusement of her maid Despina (Tracy Dahl, center); edited image, based on a Ken Howard photograph, courtesy of the Santa Fe Opera.]

Nor are New York designer Terese Wadden’s costumes designed to evoke a specific time or place. Schlather explained that the men are sometimes in cowboy outfits because Santa Fe is “out West” to New Yorkers, but one need not ponder if this or that adornment has a deeper meaning – excepting, perhaps, scenes with Ben Bliss’ barechested Ferrando and Jarrett Ott’s trouserless Guglielmo.

Director Schlather’s staging of Fiordiligi’s two arias, departing from each aria’s function in da Ponte’s libretto, demonstrates Schlather’s “decluttering”.. Fiordiligi’s Come scoglio – is no longer a declaration to the men (who, unknown to her, are disguised as “Albanians”) that she is steadfast in her virtue. It is sung to herself, as a reminder that this is who she should strive to be.

Her Per, pieta is not her realization that she has hurt the man (who she is unaware is Ferrando in disguise) but is sung with both Ferrando and her original fiancé Guglielmo present, during which she and Guglielmo slowly (and significantly) back into each other.

I had been fortunate to be present in Chicago for a Majeski “breakthrough” performance, when she replaced another artist as the Countess Almaviva [Festival Casting for Lyric Opera’s “Nozze di Figaro” – Chicago, March 9, 2010], and have since reported on her performance as Vitellia, another iconic Mozart role [Polenzani and DiDonato Triumph as McVicar Illumines “La Clemenza di Tito” – Lyric Opera of Chicago, March 11, 2014].

Equally engaging is Canadian mezzo-soprano Emily D’Angelo as the spirited Dorabella, who in any staging of the opera is the less ‘rigid’ sister. Like Fiordiligi, Dorabella has bravura arias to test her mettle. D’Angelo’s first act Smanie implacabili sizzled with energy, and the sly second act E amor un ladroncello was smoldering.

[Below: Guglielmo (Jarrett Ott, left) finds a connection with Dorabella (Emily D’Angelo; edited image, based on a Ken Howard photograph, courtesy of the Santa Fe Opera.]

Kansas tenor Ben Bliss demonstrated the vocal beauty and breath control that one needs to be successful in Mozart’s tenor roles.

[Below: Ferrando (Ben Bliss, left) gets serious about moving in on Fiordiligi (Amanda Majeski, right); edited image, based on a Ken Howard photograph, courtesy of the Santa Fe Opera.]

[Below: Don Alfonso (Rod Gilfry, right) shocks Gugleilmo (Jarrett Ott, left) and Ferrando (Ben Bliss, center) with his opinions on the likely fidelity of their girl friends; edited image, based on a Ken Howard photograph, courtesy of the Santa Fe Opera.]

Pennsylvania baritone Jarrett Ott charmed as the self-assured Guglielmo, whose ego will take a battering by opera’s end.

[Below: Jarrett Ott as Guglielmo; edited image of a production photograph from Facebook/ Jarrett Ott.]

Ott had made strong impressions vocally and dramatically in Santa Fe Opera’s 2018 season as Arlecchino in “Ariadne” and as Maximilian in Bernstein’s “Candide”. His previous Santa Fe Opera Mozart assignment had been as Masetto [Review: Okulitch, Ketelsen Star in Santa Fe Opera’s New “Don Giovanni”, July 2, 2016],

[Below: Dorabella (Emily D’Angelo, right) gets serious about moving in on Guglielmo (Jarrett Ott, left); edited image, based on a Ken Howard photograph, courtesy of the Santa Fe Opera.]

This is not the first summer festival in which Ott has donned a cowboy outfit onstage. He previously starred as Curly at the 2017 Glimmerglass Festival [Review: Glimmerglass Festival’s Rip-Roaring “Oklahoma!” – July 14, 2017.] See also Rising Stars: An Interview with Jarrett Ott.

I was left with a question. As Alfonso’s cowboy-outfit clad soldiers left for their “war”, with whom were his cowboys supposed to be fighting?

[Below: Rod Gilfry as Don Alfonso; edited image, based on a Ken Howard photograph, courtesy of the Santa Fe Opera.]

The big surprise for me was the appearance of Canadian soprano Tracy Dahl as Despina. I had seen her perform three times previously. each time in the 20th century.

Hearing her 20 years later was revelatory. She was in fine voice, and possessed the same comic flair that I recalled from her “Hoffmann” Olympia.

The musical performance of the opera itself was superbly realized from orchestra and principals. In this production the chorus performed offstage. The chorus consists of Santa Fe Opera Apprentice singers, whose chorus master is Susanne Shestron.

The lighting was the work of Pennsylvania designer Jax Messenger.

I recommend the musical performance enthusiastically, and find Schlather’s ideas and presentation of interest, especially to aficionados of Mozart’s da Ponte operas.

However, whatever insights into the opera that the deconstruction brings, Schlather’s approach to “Cosi” might have the disadvantage of making a problematic plot almost incomprehensible to a person who has little previous knowledge of the opera.