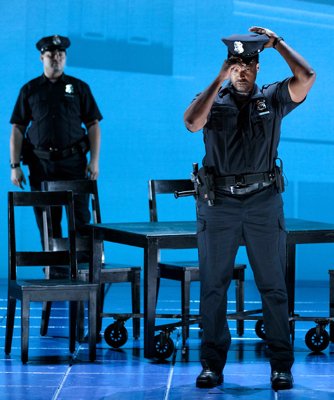 The Glimmerglass Festival presented the world premiere of an important new opera, with a libretto by Tazewell Thompson, by Broadway musical composer Jeanine Tesori (who won a 2015 Tony for Fun Home), .

The opera is concerned with the impact on a Harlem policeman, his wife and their community when the policeman’s son is shot to death by a fellow officer during a student protest.

The central character of “Blue” is the Father, sensitively portrayed by District of Columbia bass-baritone Kenneth Kellogg.

Thunderous chords accompany the Father’s donning of his police uniform, as he assumes the responsibility of becoming an “officer of the law” (as opposed to becoming a “cop” as his Son refers to him).

[Below: the Father (Kenneth Kellogg), front right) dresses in his officer’s uniform as a fellow officer (Camron Gray, back, left) looks on; edited image, based on a Karli Cadel photograph, courtesy of the Glimmerglass Festival.]

Maryland mezzo-soprano Briana Hunter sings the role of the Mother. Possessing a dramatic voice, Hunter gave a brilliant performance as the buffer between father and son.

[Below: the Mother (Briana Hunter, right) looks at her baby being held by the Father (Kenneth Kellogg, left); edited image, based on a Karli Cadel photograph, courtesy of the Glimmerglass Festival.]

Glimmerglass Young Artist Aaron Crouch was convincing as the social activist Son, who acts out his rebellious feelings for being part of a police family, whom he believes protects a system the Son wishes to transform.

[Below: the Son (Aaron Crouch), feeling estranged from his police officer family, is attracted to demonstrations for social justice; edited image, based on a Karli Cadel photograph, courtesy of the Glimmerglass Festival.]

The argument between Father and Son takes place, but ultimately both father and son admit they continue to love each other, and they embrace each other in mutual forgiveness.

[Below: after a hurtful argument between the Father (Kenneth Kellogg, above) and the Son (Aaron Crouch, below); the two forgive each other and embrace; edited image, based on a Karli Cadel photograph, courtesy of the Glimmerglass Festival.]

The reactions of the family and community to the death of the Son in a peaceful protest (an event that is not shown) are central to the opera. The Son’s death causes the Father to become disillusioned with his own life and career, and seeks counseling from a Roman Catholic priest, played with distinction by District of Columbia baritone Gordon Hawkins.

[Below: The Reverend (Gordon Hawkins) speaks at the Son’s funeral; edited image, based on a Karli Cadel photograph, courtesy of the Glimmerglass Festival.

The Mother’s Girlfriends and The Father’s Fellow Officers

In addition Ariana Wehr displayed a voice of power in the role of a maternity room nurse.

[Below: the Mother (Briana Hunter, center) receives the concerns and advice of her girlfriends (clockwise from left, Mia Athey, Brea Renetta Marshall and Ariana Wehr); edited image, based on a Karli Cadel photograph, courtesy of the Glimmerglass Festival.]

Complementary to the Mother’s Girlfriends’ scene is one in which the Father shares some male camaraderie with his police force sidekicks, played by Tennessee baritone Nicholas Davis, District of Columbia tenor Edward Graves and Tennessee tenor Camron Gray.

[Below: the Father (Kenneth Kellogg, second from left) enjoys some “man time” with his police force buddies, played by Nicholas Davis (left), Camron Gray (second from right) and Edward Graves (right); edited image, based on a Karli Cadel photograph, courtesy of the Glimmerglass Festival.]

Ohio conductor Maestro John DeMain led the Glimmerglass Festival Orchestra in a stirring performance. A specialist in both American opera and musical stage works, DeMain is a masterful presence in the creation of any new operatic work.

[Below: Maestro John DeMain; edited image of a publicity photograph from the Madison Symphony Orchestra..]

Composer Jeanine Tesori’s credentials as a composer for American musical theater are unquestioned. Her operatic endeavors have included an operatic biopic on American author Eugene O’Neill and his spouse presented at a previous Glimmerglass Festival [ See The Pittsingers as the O’Neills in Tesori’s “Blizzard on Marblehead Neck” – Glimmerglass, August 13, 2011 ].

In previous world premiere reviews, I have praised those American opera composers who embrace the melodic richness encountered in many American musicals and cinematic soundtracks.

Tesori’s affection for the melodic potential of through-composed American musicals is obvious in the musical composition of “Blue”, as is the evidence of her Italian heritage in orchestral passages that would not seem out of place in the verismo operas of Puccini’s contemporary composers. Tesori’s musical style beautifully fit Tazewell’s libretto.

[Below: “Blue” Librettist and Director Tazewell Thompson; edited image, based on a publicity photograph.]

Librettist Tazewell Thompson joined Composer Tesori in the Glimmerglass Festival “Preview” discussion an hour before the performance. That discussion illuminated Thompson’s personal history. He was raised by an order of Dominican Nuns (and was the cherished special project of one of them) in the place of a mother and father unable to provide sustenance and emotional support for their son.

That personal history is evident in “Blue’s” emphasis on family structure, family relationships and religious belief that permeate the work. It also results in unique conversations that both persons who are within African-American communities and persons who are not, should find absorbing.

In a couple of the early scenes – with the Mother’s Girlfriends and the Father’s guy pals – extended conversations slow the action and are ripe for some pruning, but from the early first act scene when the Son is born, the opera’s libretto is superbly constructed.

Tazewell Thompson’s direction produced a fast-moving drama, one scene flowing into the next with changes of furnishings and props. Great care was taken to emphasize the psychological and social relationships of the principal cast members – especially the searing impact of a police officer-caused death on this particular African-American couple.

Texas designer Donald Eastman created the sets, which were dominated by a projected back wall of windowed structures, that sometimes appeared to be urban rowhouses and at other times were back lit to represent the priest’s rectory or the church whose congregation gathered for the Sons funeral.

If one accepts that a successful opera is one that becomes part of the world’s performance repertory – with live performances taking place regularly – then – with a few hundred exceptions – virtually every opera ever written could be deemed a failure.

Every once and a while, a new opera is heard and seen, that seems possible to beat those long odds. I suggest that one such opera is Jeanine Tesori’s and Tazewell Thompson’s “Blue”.

Among the criteria that most “successful” operas share is the presence of characters in whose emotions the audience is invested. There were powerful scenes throughout “Blue”, but the one I found especially touching was the final scene – a dinner between the Father, the Mother and the Son – in which all three show respect and affection for one another.

[Below: the Father (Kenneth Kellogg, left), the Mother (Brianna Hunter, center) and the Son (Aaron Crouch, right) enjoy what they are unaware is their final meal together; edited image, based on a Karli Cadel photograph, courtesy of the Glimmerglass Festival.]

That scene (and the opera) ends with the Son mentioning that he will be take part in one last peaceful protest. As the curtain closed, one could hear audible sobbing throughout the audience.

I enthusiastically recommend “Blue” to veteran opera-goers and to lovers of American musical performance, as well as persons new to either of these art forms.