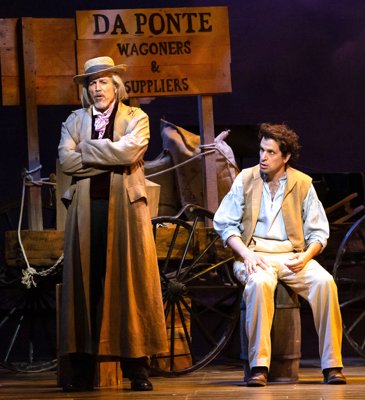 The opera, whose music was by Irish-born American composer Tarik O’Regan, and its libretto, by British director John Caird, proved to be an indulgent paean to Da Ponte, Mozart’s collaborator for “Marriage of Figaro”, “Don Giovanni” and “Cosi fan Tutte”.

Da Ponte’s old age and Da Ponte’s youth are presented in two different formats – his old age is the subject of O’Regan’s “The Phoenix” itself, but his youth is presented as an opera that Da Ponte’s son Enzo has composed (in which Enzo plays the younger Da Ponte). For the sake of clarity, I will refer to Enzo’s composition as a “musical play” and O’Regan’s composition as the “opera”.

Performing the role of Da Ponte as an older man, Hampson enlisted his mellifluous baritone and acting skill to project the self-assurance of a dramatic genius reflecting on his eventful life.

[Below: Thomas Hampson as Lorenzo Da Ponte; edited image, based on a Lynn Lane photograph, courtesy of the Houston Grand Opera.]

Hampson’s Da Ponte appears in the first act introducing and commenting upon the musical play, but it is the second act in which Hampson’s Da Ponte is most prominent, as, having left Europe forever, Da Ponte adjusts to life in the New World.

Caird has constructed his libretto so that the youthful Da Ponte – who achieved his fame in Europe during the Enlightenment – appears in flashback scenes that are part of a new musical play, composed by his son Enzo, being presented in New York in the early 1830s.

Luca Pisaroni is tasked to play two roles. Pisaroni is both Lorenzo’s son Enzo in the opera and the younger Lorenzo in the musical play.

Pisaroni’s performances were masterful. As Enzo, appearing in the American scenes, he was convincing as a dutiful son, determined that his father should achieve proper recognition for his central role in Mozart’s most successful operas.

[Below: Enzo Da Ponte (Luca Pisaroni, right) listens to the European stories of his father, Lorenzo (Thomas Hampson, left); edited image, based on a Lynn Lane photograph, courtesy of the Houston Grand Opera.]

Pisaroni’s lyrical bass-baritone was especially effective when he assumed the role of the younger Da Ponte. Known for his facility in Mozart’s music, Pisaroni demonstrated facility with O’Regan’s passages of recitative. As an actor, Pisaroni proved to be plausible as the larger-than-life Lorenzo.

Hampson and Pisaroni were supported by four artists who between them sang 18 comprimario roles.

Chaieb performed brilliantly as Mozart, donned in a costume designed to evoke the audience’s memories of the character Cherubino from “Marriage of Figaro”

[Below: Rihab Chaieb as the composer Wolfgang Mozart; edited image, based on a Lynn Lane photograph, courtesy of the Houston Grand Opera.]

Assuming the roles of the men important in the life of the Da Pontes was Chad Shelton, whose bright-sounding tenor complemented Hampson’s and Pisaroni’s lower voices.

Lauren Snouffer and Elizabeth Sutphen assumed several of the com-romario character roles and added their voices to the opera’s final sextet.

Irish-born American composer Tarik O’Regan composed a complex score, rich in the choral and ensemble music for which O’Regan is justly famous,

Some scenes, such as that of Da Ponte’s arrival in America, have the feel of Benjamin Britten’s great seafaring opera choruses. Two of the roles – that of Old Lorenzo and of Enzo/Young Lorenzo – are especially effective, obvious vehicles, as they are for its world premiere, for the vocal and dramatic talents of major operatic stars.

The libretto, by John Caird, excerpts many of the major life events of Da Ponte from his five-volume memoirs, which portray him, not always with historical accuracy, as a larger than life Enlightenment figure, like his friends the Emperor Joseph II, Casanova and Mozart.

Presenting Da Ponte’s checkered career in Europe as American musical theater composed in the early 1830s in which his Da Ponte’s son Enzo plays his father is conceptually interesting, but has its dramatic downsides.

The sequence of scenes – Da Ponte’s baptism, investiture and expulsion from the priesthood, his randy friendship with Casanova and seditious politics resulting in expulsion from Venice, his battling prima donne in London and subsequent bankruptcy – often seem like chapters out of his Enlightenment contemporary Voltaire’s Candide and sometimes remind me of Bernstein’s operatic treatment of Voltaire’s satirical work.

Ultimately, if the opera has a fatal flaw, it is that Da Ponte’s long life and wild experiences were too interesting to the opera’s composer and librettist, who were loathe to leave any part of it out of their musical work. Only a small percentage of operas throughout history have secured a place in the performance repertory, and the prospects of that occurring for this complex work seem daunting.

I recommend the opera and production for the excellent performances of Thomas Hampson and Luca Pisaroni and their supporting cast members.