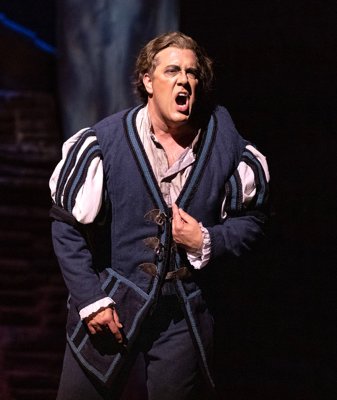 Baritone Stephen Powell was Rigoletto. Powell has vocal power and strength in the upper part of the baritone range, both prerequisites to taking on this iconic role. Powell’s voice has a lyrical quality that resonates in his emotional duets with Gilda. Rigoletto’s great arias Pari siamo and Corigiani! and his Vendetta duet with Gilda were not just well sung, they were powerfully persuasive.

I have long been an admirer of Powell’s performances in principal roles in vocal styles as diverse as Donizetti [A Passion-filled “Lucia” from Albina Shagimuratova and Saimir Pirgu – Los Angeles Opera, March 15, 2014 ] and Janacek [Review: Nadja Michael’s Arresting Performance in “Makropulos Case” – San Francisco Opera, October 14, 2016 ].

However, the role of Rigoletto – more than any other that I’ve seen him perform – demonstrates the full range of his obvious vocal and dramatic talents.

The performance was lyric coloratura Alisa Jordheim’s San Diego Opera debut, and my first opportunity to hear her. Visually appropriate for the role of Rigoletto’s sheltered young daughter Gilda, she immediately displayed the vocal beauty and technical virtuosity in her melodic duets with Stephen Powell’s Rigoletto and Scott Quinn’s Duke of Mantua.

[Below: Alisa Jordheim as Gilda; edited image, based on a Karli Cadel photograph, courtesy of the San Diego Opera. ]

The San Diego audience obviously had bonded with Jordheim by her second act aria Caro nome – Gilda’s rapturous celebration of “Gualtier Maldè”, the name of an impoverished student that the Duke pretended to be. Jordheim’s Caro nome – which included writing the student’s name in the air, emphatically adding the accent at the end of Maldè – was a triumph. The sustained ovation for her performance of the aria was a show-stopper.

I look forward to hearing Jordheim take on other challenging assignments in the coloratura repertory, such as the title roles of Donizetti’s “Lucia di Lammermoor” and Delibes’ “Lakmé”.

San Diego Opera’s general director David Bennett had announced that tenor Scott Quinn, the Duke of Mantua, was singing through a cold, but it was a strong, focused performance nonetheless.

Quinn was effective in each of the Duke’s major arias – the first act Questa o quella, the introspective double aria (that begins Parmi veder le lagrime) and the megahit La donna é mobile.

[Below: the Duke of Mantua (Scott Quinn) reflects on why he may have found a woman which he could truly love; edited image, based on a Karli Cadel photograph, courtesy of the San Diego Opera.]

Even though the character of the Duke of Mantua is considered a morally reprehensible, serial womanizer (and married, on top of that), Quinn’s charming delivery was consistent with an alternate explanation – that the Duke and Gilda had found an emotional bond.

For the opera’s two principal comprimario parts, the siblings Sparafucile, an assassin, and his sister Maddalena, an assassin’s accomplice, the San Diego Opera chose to cast a married couple, bass-baritone Kyle Albertson and contralto Alissa Anderson.

[Below: Kyle Albertson as Sparafucile; edited image, based on a Karli Cadel photograph, courtesy of the San Diego Opera.]

As Sparafucile, Albertson was appropriately sinister in his second act encounter with Rigoletto and convincing in his final act declaration that assassins have a code of ethics that they, like other professions, must honor.

Anderson, as Maddalena, met the requirements of her role, principally her strong presence in Verdi’s most famous quartet, Bella figlia dell’amore.

[Below: Alissa Anderson as Maddalena; edited image, based on a Karli Cadel photograph, courtesy of the San Diego Opera.]

The San Diego Opera Orchestra was led by Maestro Steven White in an orchestrally brilliant performance.

The opera was directed by Michael Cavanagh, whose published “directors’ notes” suggests that “the power of Verdi’s score and . . . the human voice at its most impactful” compels us “to truly empathize with [‘Rigoletto’s’ damaged characters.]”

[Below: the Duke of Mantua (Scott Quinn, lower right) is surroundd by fawning courtiers; edited image, based on a Karli Cadel photograph, courtesy of the San Diego Opera.]

“Rigoletto” is an opera that invites non-traditional productions, including some that bring deep insights into the opera characters [Review: A “Rigoletto” Surprise in Paris: Ludovic Tézier Subs in Title Role in Claus Guth’s Production with Fabiano, Peretyatko, Luisotti – May 5, 2016 ].

Cavanagh – even if he occasionally departs from what Verdi and librettist Piave were expecting (the courtiers kidnapping Gilda murder her servant, Giovanna; the dying Gilda appears as an angelic vision above the stage, while Rigoletto, who is supposedly holding her body, is at the side of the stage) – chooses to focus on the characters in Renaissance Mantua as Verdi intended, and, to that extent, one could consider this a “traditional” production.

The production with the sets (created by Seattle Opera studios and now owned by the San Diego Opera) and costumes (created by the Opera de Montreal) is a handsome one. Cavanagh’s direction is always logical, resulting in an evening whose dramatic impact is as appealing as the beautiful singing.

I enthusiastically rcommend the San Diego Opera production of Verdi’s “Rigoletto” with its excellent cast, both to the veteran opera-goer and the person new to opera.

For my reviews of other productions directed by Michael Cavanagh, see: