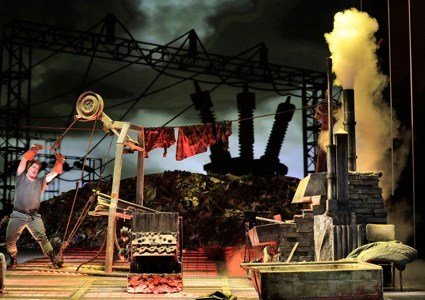 Since my junior high school years, I have been attending performances of the San Francisco Opera.

Beginning with calendar year 2006, I have given letter grades to each of San Francisco Opera’s productions during that calendar year. These are my grades for 2018 – the 13th year of these grades.

Calendar year 2006 began the general directorship of David Gockley. Calendar Year 2016 was split between the general directorships of Gockley and his successor, Matthew Shilvock. Although Shilvock was General Director for 2017, most of the repertory decisions had been made during Gockley’s tenure. The nine operas for Calendar Year 2018 included the four operas of Wagner’s “Ring of the Nibelungs” and the world premiere of Heggie’s “It’s a Wonderful Life” (each a Gockley era choice repertory decision) and five operas (two as a double bill) scheduled by Shilvock.

Based on these criteria, these are the ratings for 2018.

Francesca Zambello’s conceptualization of “Rheingold”, the first opera of Wagner’s “Ring of the Nibelungs”, dwells on a series of iconic American images. Zambello’s “Rheingold”, now a dozen years old, is dramatically effective and conceptually stunning.

Some of Zambello’s ideas are not too far from what Wagner likely imagined (“River Maidens” swim in a river whose origins are in California’s Sierra, rather than the Rhine, but still guard an underwater horde of gold; the Nibelung land, in the depths of a California gold mine, is filled with Alberich’s Nibelung slaves).

Other images Wagner likely would have found more dissonant: the gods live in a posh community, like New York’s Hamptons, the giants are hardhat construction workers, the gods ascent into Valhalla is via an ocean liner gangplank.

The most striking images in the Zambello “Ring” comprise the three acts of “Die Walküre”. Act I takes place in an Appalachian cottage in which Good ol’ boy Hunding and his bride Sieglinde have accommodated to each other over the years. The first scene of Act II is set in the corporate penthouse office of Valhalla, Inc. populated by Wotan, Fricka and Fricka’s stepdaughter Brünnhilde, whom Fricka clearly dislikes.

[Below: Brünnhilde (Irene Theorin, right) reveals to Sieglinde (Karita Mattila, second from right, in blue dress) that she is pregnant with a hero as the aviatrix valkyries look on; edited image, based on a Cory Weaver photograph, courtesy of the San Francisco Opera.]

The most exciting feature in the Zambello “Ring” is the beginning of “Walküre’s” Act III in which the valkyries, dressed in aviatrix costumes, parachute onto stage.

The productions’ startling images and dynamic projections themselves assured an interesting evening, but the cast assembled by the San Francisco Opera made the performance a world class event.

Below: Siegfried (David Brenna, at left edge) forges the sword Nothung; edited image, based on a Cory Weaver photograph, courtesy of the San Francisco Opera.]

The opera’s final scene, whose love music for Siegfried and Brünnhilde, is among the most beautiful in all of opera, was performed with distinction by Brenna and Irene Theorin.

Performing the final “Ring” opera, whose first act alone is over two hours long, is one of the most complex endeavors in musical theater. Daniel Brenna and Irene Theorin performed brilliantly, supported by the imposing and vocally secure performances of Italian born American bass Andrea Silvestrelli and New York baritone Brian Mulligan as Gunther and Melissa Citro’s sympathetic portrayal of Gutrune.

[Below: With Brünnhilde’s self-sacrifice, the rule of the gods comes to an end, the ring of the Nibelungs has been returned to the River Maidens and it becomes the task of women to restore order to the world; edited image, based on a Cory Weaver photograph, courtesy of the San Francisco Opera.]

The opera’s final act, in Zambello’s production, centers the resolution of the opera not just on Brunnhilde’s self-sacrifice but on the opera’s surviving women – including the River Maidens, Gutrune and the female Gibichungs – who collectively take responsibility for cleaning up the mess that the men – Wotan, Loge, Alberich, Hagen et al. – created.

In September, the San Francisco Opera’s 2018-19 season opened with Jose Cura’s inventive production of Mascagni’s “Cavalleria Rusticana”, not just paired on a double bill with Leoncavallo’s “Pagliacci”, but cleverly integrated so that all the action of both operas takes place in the same community (whose central establishments are the Church and Mamma Lucia’s tavern, a place frequented, in this production, by the opera’s composer, Pietro Mascagni, himself).

Below: Turiddu (Roberto Aronica, third man standing from right) joins men of the village at his mother’s cantina; edited image, based on a Cory Weaver photograph, courtesy of the San Francisco Opera.

Meanwhile, some of the “Cav” action presages the events of “Pagliacci”. Notably, Mamma Lucia’s waiter, Silvio (David Pershall), will be murdered along with his lover by the man he has cuckolded.

Early in “Pagliacci”, the Church in which Easter services are held in “Cavalleria”, is the site of Turiddu’s funeral, his casket reverentially touched by composer Mascagni himself. A stage has been set up for the visiting troupe of pagliacci in front of Mamma Lucia’s cantina to which Santuzza is given a prominent seat.

Canio (Marco Berti) discusses the evening’s performance with villagers at Mamma Lucia’s, but makes it clear that he would take any hint of marital infidelity on the part of his wife Nedda (Lianna Haroutounian) very seriously.

[Below: Canio (Marco Berti, left) seeks the name of the lover of his wife Nedda (Lianna Haroutounian, right); edited image, based on a Cory Weaver photograph, courtesy of the San Francisco Opera.]

Canio’s discussion of his wife’s infidelity at Mamma Lucia’s is ironic, because Lucia’s waiter, Silvio (David Pershall), is Canio’s rival.

The “Pagliacci” Prologue is sung by Dimitri Platanias (who played Alfiio and will later in the performance play Tonio), but Platanias sings the Prologue dressed as “Pagliacci” composer Ruggero Leoncavallo himself.

Donizetti’s “Roberto Devereux”, one of four Donizetti operas to deal with Queen Elizabeth I of England or her mother Boleyn and father Henry VIII, is often considered, with “Anna Bolena” and “Maria Stuarda”, as part of a Donizetti Tudor Trilogy.

Director Stephen Lawless created a trio of interlinked productions for Donizetti’s three Tudor Trilogy operas. “Roberto Devereux” is roughly based on (although ultimately wildly divergent from) the intrigues of Robert Devereux, the Earl of Essex, to seize Elizabeth’s throne or, at least, effect control over the sovereign.

The opera itself is filled with arresting music, including Roberto’s final double aria and Elizabeth’s Quel sangue versato. Lawless’ production, which shifts the focus of the opera to the aging Queen Elizabeth, becoming an extraordinary opportunity for dramatic soprano Sondra Radvanovsky to display her craft.

The resulting San Francisco Opera performance which starred Jamie Barton and Andrew Manoa as the Duchess and Duke of Nottingham, I suggested in my reviews as the very best performances of “Roberto Devereux” in the opera’s history.

[Below: Russell Thomas as Roberto Devereux; edited image, based on a Cory Weaver photograph, courtesy of the San Francisco Opera.]

San Francisco Opera’s Matthew Shilvock chose Puccini’s “Tosca”, whose long association with the San Francisco Opera includes the opening performance of the War Memorial Opera House, as the first new production of a core repertory opera of his tenure as general director

The colorful production was the occasion for the San Francisco Opera debut of soprano Carmen Attanasio as Tosca and the return of baritone Scott Hendricks (after a 15 year absence) as the Baron Scarpia. Former San Francisco Opera young artist Brian Jagde, a spinto tenor with an international career, was the Cavaradossi.

Below: Tosca (Carmen Attanasio, left) critiques the subject matter of the paintings of her lover, Mario Cavaradossi (Brian Jagde, right); edited image, based on a Cory Weaver photograph, courtesy of the San Francisco Opera.

Minnesota soprano Ellie Dehn and New York baritone Brian Mulligan portrayed the Viennese debutante Arabella and backwoods nobleman Count Mandryka, leading a cast that included Heidi Stober as Arabella’s sister, forced to live as a boy by parents who could only afford to raise one daughter.

[Below: Arabella (Ellie Dehn) descends a staircase; edited image, based on a Cory Weaver photograph, courtesy of the San Francisco Opera.]

The production, by British director Tim Albery, was originally seen at the Santa Fe Opera.

Unlike the Frank Capra movie on which Heggie’s opera is rather loosely based, the opera, much of Heggie’s opera concerns itself with celestial beings, with a major plot focus on what angel second class Clara must do to earn her angel wings, her activities scrutinized by four winged angels.

[Below: Golda Schultz as Clara; edited image, based on a Cory Weaver photograph, courtesy of the San Francisco Opera.]

Since its 2016 world premiere at the Houston Grand Opera’s Cullen Theater, both the opera and the production has been substantially revised, with new music for the Bailey Brothers (William Burden and Joshua Hopkins reprising their world premiere roles as George and Harry) with Keith Jameson new to the role of Uncle Billy.

Also among the new members to the cast in San Francisco are South African soprano Golda Schultz and Canadian soprano Andriana Churchman as Mary Hatch.

For my previous production grades, see: