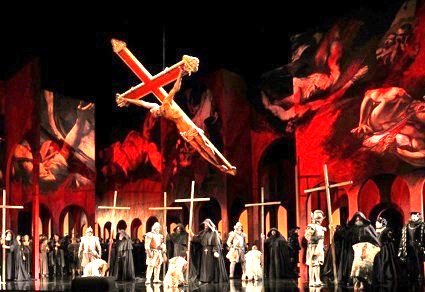 It was, however, the other principal cast member, the superstar Plácido Domingo, as Rodrigo, Marquis of Posa, that was the impetus for the Los Angeles Opera choosing “Don Carlo” for its season opener. Stars in the operatic firmament gathered in Los Angeles for the honor of sharing the stage with Domingo, certainly the most universally revered of contemporary opera singers.

As the Marquis of Posa, Domingo, at age 77, demonstrated a lyric baritone that has retained a youthful bloom. His legato is smooth and devoid of any hint of “beat” or vocal disrepair that bedevils so many artists in the later years of their career.

[Below: Plácido Domingo as Rodrigo, Marquis of Posa; edited image, based on a Cory Weaver photograph, courtesy of the Los Angeles Opera.] 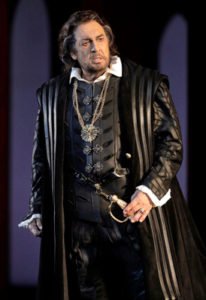 Domingo’s acting as Posa magnificently projected this extraordinary figure – a Spanish grandee with swagger who dares to scold the king; a man, philosophically in tune with the 18th century Enlightenment, who tries to reform the Spain of the 16th century Inquisition with fatal consequences.

Posa has one of the most affecting death scenes in all of Italian opera. Domingo delivered Posa’s final aria Io morrò, ma lieto in core with memorable poignancy.

The role of Posa, as with the each of the roles in this great masterwork of Verdi, requires a singer who can convey a range of emotions vocally, while performing Verdi’s luxurious melodies beautifully. Domingo brought experience, eloquence and vocal control to the task. The future will refer to Domingo’s “legendary” Posa performance, and I can confirm to the future that the attribution is deserved.

In the title role of Don Carlo, tenor Ramón Vargas returned to the Los Angeles Opera after a nearly two-decade absence, taking on a role that Domingo himself had sung with the Los Angeles Opera in 1990. Vargas, as he moves into his mid-50s, continues to concentrate his repertory of operatic roles in the lyric repertory, a strategy that augurs vocal longevity.

Vargas’ bright, appealing lyric tenor melded beautifully with Domingo in the extraordinary series of scenes between Carlo and Posa – the close harmony of their anthem of friendship Dio, che nell’alma in fondere, the dramatic tension of the auto da fe scene where Posa disarms the defiant Carlo, and, memorably, their last scene together where Posa is assassinated in Carlos’ prison cell.

Vargas’ Carlo is enmeshed in the opera’s central plot, in which Carlo’s father, for affairs of state,  takes Carlo’s intended bride, the French royal Elisabetta di Valois (sung convincingly by soprano Ana María Martínez) as his own Queen, thereby estranging his son and heir, the lovelorn Carlo.

[Below: Don Carlo (Ramón Vargas, right) is distressed at the seeming aloofness of Queen Elisabetta of Valois; edited image, based on a Cory Weaver photograph, courtesy of the Los Angeles Opera.] 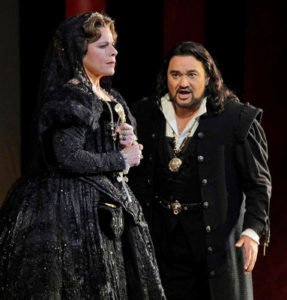 This is the third opportunity that I have had to review an Ana María Martínez performance of Elisabetta di Valois. [See Review: A Legendary Performance of “Don Carlo” at the San Francisco Opera, June 12, 2016  in which I described her singing of Elisabetta’s great final scene aria Tu che la vanita, conoscesti del mondo as “electrifying”.]

Martinez was regal, appearing reserved while exuding a suppressed inner passion. She dominated the opera’s final scene in which she delivered her great aria with distinction.

[Below: Ana María Martínez as Queen Elisabetta di Valois; edited image, based on a Cory Weaver photograph, courtesy of the Los Angeles Opera.] 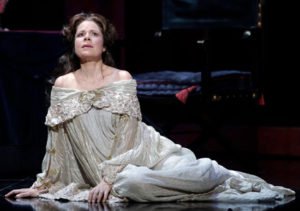 Russian mezzo-soprano Anna Smirnova was a fiery Princess Eboli, one of the most complex of Verdi’s seconda donna roles, with a searing delivery of Eboli’s dramatic aria, O don fatale!

I had been impressed with Smirnova’s Amneris six years ago in Chicago [An Admirable “Aida”: Hui He, Berti, Smirnova, Kelsey Are Impressive – Lyric Opera of Chicago, March 15, 2012] and found her Eboli equally satisfying.

[Below: Anna Smirnova as the Princess Eboli; edited image, based on a Cory Weaver photograph, courtesy of the Los Angeles Opera.] 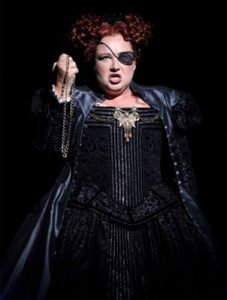 Furlanetto delivered King Philip’s soul-searching monologue Ella giammai m’amò compellingly – evoking Philip’s depression about his family estrangement, weariness with his kingly responsibilities, contemplation of his death – a masterful performance that was another highlight of the extraordinary evening.

[Below: Ferruccio Furlanetto as King Philip II; edited image, based on a Cory Weaver photograph, courtesy of the Los Angeles Opera.] 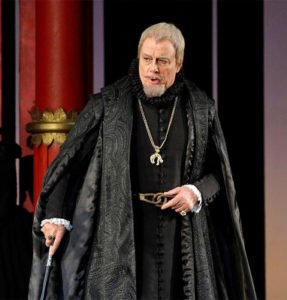 At monologue’s end, the blind, sinister Grand Inquisitor, in a chilling portrayal vocally and dramatically by basso Morris Robinson, is brought into the King’s presence in one of Verdi’s most extraordinary operatic scenes – the King is absolved of sin in advance should he decide to murder his son Carlo, while the Grand Inquisitor requires that the King also to surrender the free-thinking Posa to the Inquisition.

[Below: the Grand Inquisitor (Morris Robinson, left) suggests that King Philip II (Ferruccio Furlanetto, right) is not immune from being charged with heresy; edited image, based on a Cory Weaver photograph, courtesy of the Los Angeles Opera.] 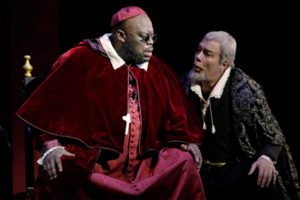 In the seven extant versions of “Don Carlo” (four in French as “Don Carlos”), several begin the opera at the French estate of  Fontainebleau. After this scene in France, the action moves to the Cloister of the Monastery of Saint Just in Spain. There, a friar (who may be Carlo Quinto – the Emperor Charles V – or his ghost) sings of the world’s vanity. The Milan version performed in Los Angeles has no introductory scene in France and begins and ends with the Saint Just scene.

Soloman Howard played the role of the mysterious friar in an otherworldly looking monk’s robe, whose face appears as a large skull. In the final notes of the opera, Robinson’s Grand Inquisitor and his followers cry out that the friar’s voice is that of Carlo Quinto and Vargas’ Don Carlo is pulled into his grandfather’s crypt to whatever fate awaits him.

[Below: Soloman Howard as a Friar, who may be the ghost of the Holy Roman Emperor Charles V; edited image, based on a Cory Weaver photograph, courtesy of the Los Angeles Opera.] 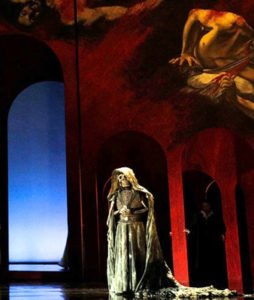 The production, created by the British team of Ian Judge (director), the late John Gunter (set designer) and Tim Goodchild (costume designer) dates from 2006. The sets consist mostly of arches that are repositioned for scene changes, above which are images of paintings in the Renaissance style. The production’s most striking image is a monstrous crucifix that descends above the crowd in the auto da fe scene. The revival was staged by Rhode Island director Louisa Muller.

[Below: the burning of heretics takes place in the auto da fe scene; edited image, based on a Cory Weaver photograph, courtesy of the Los Angeles Opera.] 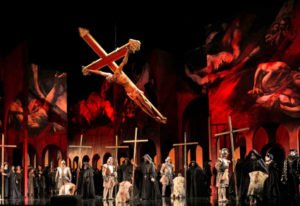 This opera in its Milan version is a favorite of Maestro Conlon and the Orchestra responded to his leadership brilliantly. The Los Angeles Opera chorus, which is directed by Maestro Grant Gershon, displayed command of Verdi’s masterful choral writing, particularly in the big choral passages of the auto da fe scene.

I enthusiastically recommend the opera, cast and production for both the veteran opera goer and person new to opera, and especially recommend that persons able to obtain tickets to Placido Domingo’s performances as Posa should do so.