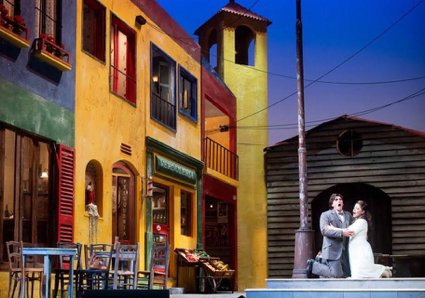 This is my fourth review posting associated with the San Francisco Opera’s September 2018 mounting of the Jose Cura production of Mascagni’s “Cavalleria Rusticana” and Leoncavallo’s “Pagliacci”. The operas were presented together as a double bill, as they often are, but were staged in a nontraditional manner.

Each opera, as written, takes place in a distinct rural community. “Cavalleria” takes place in Sicily in Spring. “Pagliacci” takes place across the Strait of Messina in Calabria (on the toe of Italy) in late summer.

“Cav” and “Pag” according to Cura

Cura creates a single village – one whose population reflects the energy and values of the section of urban Buenos Aires called La Boca, historically associated with Italian immigrants. The characters of each opera inhabit or are visitors to the village. The timing of events of Cura’s “Cavalleria” precede those of his “Pagliacci” by only a couple of days.

The most important meeting place in Cura’s productions of both operas is Mamma Lucia’s tavern, which has taken the name of the famous La Boca tavern, Caminito, which is associated with the evolution of the Argentine tango.

[Below: The Caminito Tango tavern in the La Boca neighborhood of Buenos Aires, Argentina, which has inspired the appearance (and name) of Mamma Lucia’s tavern in Jose Cura’s production of a double bill of Mascagni’s “Cavalleria Rusticana” and Leoncavallo’s “I Pagliacci”; edited image of a public domain publicity photograph.] 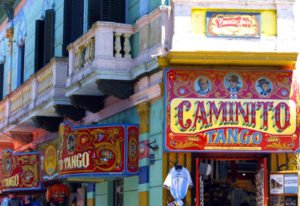 In Cura’s conception, not only do both operas take place in the same location, with their characters intermingling, the two operas’ composers, Pietro Mascagni and Ruggiero Leoncavallo, take part in the village affairs and interact with each other as well.

Unlike Cura’s original production, prepared for Liege, Belgium, in which “Cavalleria’s” Alfio, “Pagliacci’s” Tonio and Leoncavallo were played by different artists, Greek baritone Dimitri Platanias sang all three roles. This required the revival director, Jose Maria Condemi, to make adjustments in Cura’s original staging. The characters of Alfio and Leoncavallo have less stage business in San Francisco than they did in Liege, because Platanias, playing both those roles is onstage as Tonio (or changing costumes to bcome Tonio) throughout most of “Pagliacci”.

One striking innovation of the production is the fact that when Platanias sings “Pagliacci’s” famous Prologue, he is not portraying the actor who plays the brutish Tonio, but instead he is portraying the composer, Leoncacallo, who wrote the Tonio’s music.

Recognizing that Leoncavallo’s (and “Cavalleria” composer Mascagni’s) appearance is a curiosity of Cura’s production, I found it effective (and spectacularly sung by Platanias). I personally prefer the idea of the Prologue being sung by the composer, rather than the actor who plays the villain, knowing the unlikelihood of the concept being employed in most other productions.

[Below: Dimitri Platanias as “I Pagliacci’s” composer, Ruggero Leoncavallo; edited image, based on a Cory Weaver photograph, courtesy of the San Francisco Opera.] 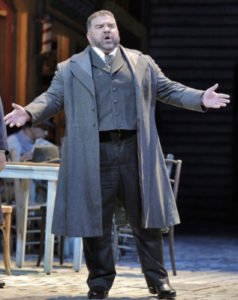 I found Cura’s ideas of the two composers wandering into the action scenes of the two act operas to be a coup de theatre. Especially poignant was a scene that took place soon after the “Pagliacci” Prologue in which the coffin carrying the body of the slain Turiddu is carried out of the church. As the pall bearers pause in front of Mamma Lucia’s tavern, Mascagni, with bowed head, reverentially touches Turriddu’s coffin and exits the stage with the pall bearers on their way to Turiddu’s grave.

The pagliacci troupe visiting the village, of whose presence we had become aware at the beginning of “Cavalleria”. The troupe returns early in “Pagliacci” to engage in revelries geared to interest the village folk in their late afternoon show. As villagers gather, masked characters and expert jugglers provide entertainment enticements to target audiences.

[Below: one of the pagliacci enters the crowd wearing a skull mask; edited image, based on a Cory Weaver photograph, courtesy of the San Francisco Opera.] 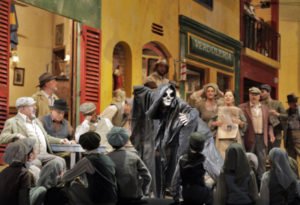 In Cura’s concept, Mamma Lucia’s tavern is a familiar place for the pagliacci troupe. Obviously they regularly visit here as one of a circuit of villages at which the troupe performs.

The focus on the tavern invites the creation of backstory of how Nedda and Silvio met. Perhaps, on a previous visit Nedda had visited the tavern after a violent episode with Canio, and Silvio comforted the visibly upset actress. (One could even imagine, since tavernas are often run solely by members of a single family, that Silvio is Turiddu’s younger brother or cousin.)

[Below: Silvio (in gray suit, below right) comforts Nedda (in white dress); edited image, based on a Cory Weaver photograph, courtesy of the San Francisco Opera.] 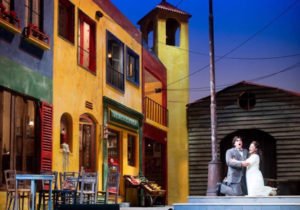 It is at the tavern that Berti’s Canio warns the men with whom he is drinking not to joke about Nedda’s infidelity, in a tone that suggests possessiveness and a violent temper.

[Below: Canio (Marco Berti, standing left in white makeup) warns the men at Mamma Lucia’s tavern not to joke about the infidelity of his wife; edited image, based on a Cory Weaver photograph, courtesy of the San Francisco Opera.] 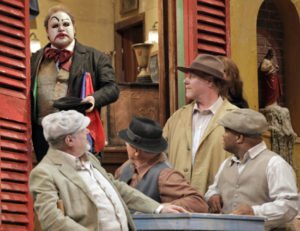 Later, after Platanias’ Tonio offers confirmation that Nedda is seeing another man, it is at the tavern that he sings the double bill’s most famous aria, the cathartic Vesti la giubba, at the end of which Canio is comforted by Mamma Lucia.

The stage for the play is improvised on a plaza in front of the tavern. “Cavalleria’s” Santuzza (whose pregnancy is now obvious) is provided a nice seat in the audience. The play proceeds to the opera’s tragic denouement.

The Italian composers Mascagni and Leoncavallo working independently of each other created two works which began to be linked in 1893 (first, by the New York Metropolitan Opera). There is nothing other than tradition that requires the two works be performed together, or that each work be paired with another opera, rather than being presented alone. Jose Cura’s absorbing production of the two works suggests that not only should they be paired but be considered as two overlapping stories that take place consecutively in the same community.

Does Cura concept work? Yes, brilliantly! One can think of it as an exploration of ways in which men relate to women with whom they are emotionally involved – Silvio/Nedda; Turiddu/Lola/Santuzza/Mamma Lucia; Canio/Nedda; Tonio/Nedda.

Only Silvio passes muster as a decent human being, supporting an emotionally and physically abused woman. Turiddu is suicidally reckless in pursuing his passionate affair with Lola, but at the end has the self-awareness to try to make sure Santuzza is taken care of.

Canio is violent towards Nedda and demonstrates his belief that his wife taking a lover is justification for his committing a double murder. Tonio deliberately invokes Canio’s jealousy as revenge against Nedda’s rejections of his advances.

Cura’s conception ends with the phrase E commedia e finita, uttered not by Canio or Tonio (both characters have a claim to the phrase in the performance tradition), but by Mamma Lucia, the woman who has been affected by the deaths of Turiddu, Silvio and Nedda and whose Caminito Tavern has been the central place where the horrible events occur.

The revival director, Jose Maria Condemi deserves praise for translating Cura’s concepts on the War Memorial Opera House stage. Condemi elicited effective performances out of the principal artists each of whom was new to the production. He utilized the acting talents of the San Francisco Opera Chorus and supernumeraries  to give the production a cinematic flow.